Lady Stomp Stamps Herself A Star Of The Future 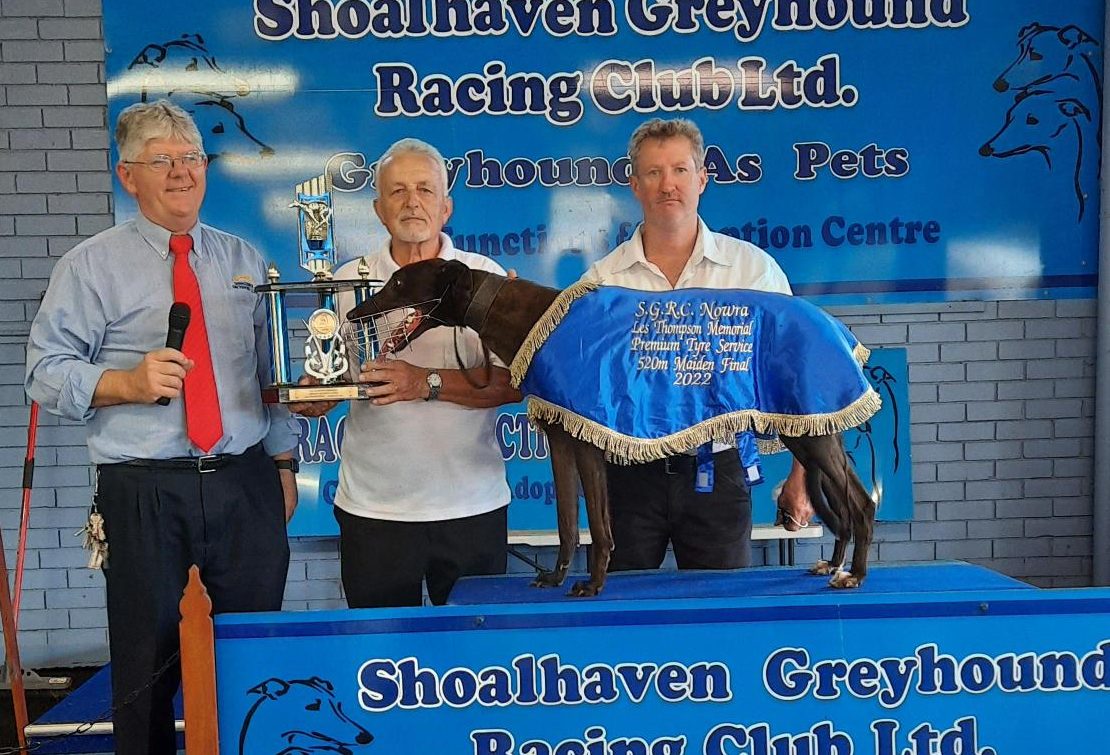 The daughter of Fernando Bale rocketed over the 520 metre journey in a flying 29.78 to land the $5,000-to-the-winner Nowra maiden feature for 22-year-old Majors Creek trainer Ayden Sheridan.

Ayden is the son of breeder-trainer Craig Sheridan who raced Lady Stomp’s dam Book Of Luck to 10 racetrack victories including a berth in the Group 1 Association Cup and Group 2 Summer Distance Plate at Wentworth Park.

“Lady Stomp and Bad Ringo are the first greyhounds Ayden has trained outright so it was a very rewarding night for us,” Craig Sheridan said.

“Unfortunately Ayden wasn’t there on Monday night for the final as he cut his hand in a fencing accident and it got quite swollen. He calls the shots with the two of them and is always learning and asking questions.

“And he’s got a couple of real nice ones right out of the blocks. It’s great.”

After debuting with a “very professional” 30.26 heat victory, Sheridan was confident that Lady Stomp would be hard to beat in Monday night’s finale.

And from box two the emerging talent gave nothing else a look in, scoring by 9 ¼ lengths over Hayley’s Rocking with Little Hillary a further length away in third.

“Not a lot went her way in the heat so to see her win the way she did on debut was very professional,” Sheridan said.

“And the series probably came around a month earlier than we would have liked. She hadn’t had a lot of field experience but she trialled 29.89 at her first go out of the boxes at Nowra which gives you an idea how she was going.

“She’s a bitch that just keeps on improving. It’s hard to know how good she might be with the way she’s progressing.

“And it’s hard to find fault with her. Everything she does at the track and at home is what you’re after. But it wasn’t always like that, early on when she was breaking in she was only steady.”

Lady Stomp is from a litter of eight which includes Bad Ringo – also trained by Ayden – a finalist in Monday night’s Les Thompson Maiden as well.

“But he just hasn’t come to hand as quickly and is missing the star and doing a bit wrong. He’s got the engine and will put it all together with some time and experience.”

While reluctant to compare Lady Stomp to her group class mother Book Of Luck, Sheridan admits it’s hard not to get excited about what’s ahead for the unbeaten youngster.

“I’d say Ayden will get her to Wentworth Park for some experience in the next week or two,” Sheridan added.

“If they handle Nowra they usually adapt to Wenty pretty quickly and after that he’ll probably shoot for a Wednesday night race to start her off in town.

“But like her mum it looks like her future will be over longer. She’s got the temperament for it and a great work ethic. Her run home sectionals are right up there.”

Sheridan also has a 12-month old litter out of Book Of Luck to Million Dollar Chase hero Good Odds Harada.

“I love them,” Sheridan said.

“There’s a bit of a recipe in there as to why I went that way in the breeding and so far so good. I’ve done a little bit with them and they are showing all the right signs.

“I can’t thank Andy Lord enough for giving me Book Of Days to breed with. He said she’d start a great line for me and he’s proven to be spot on.”