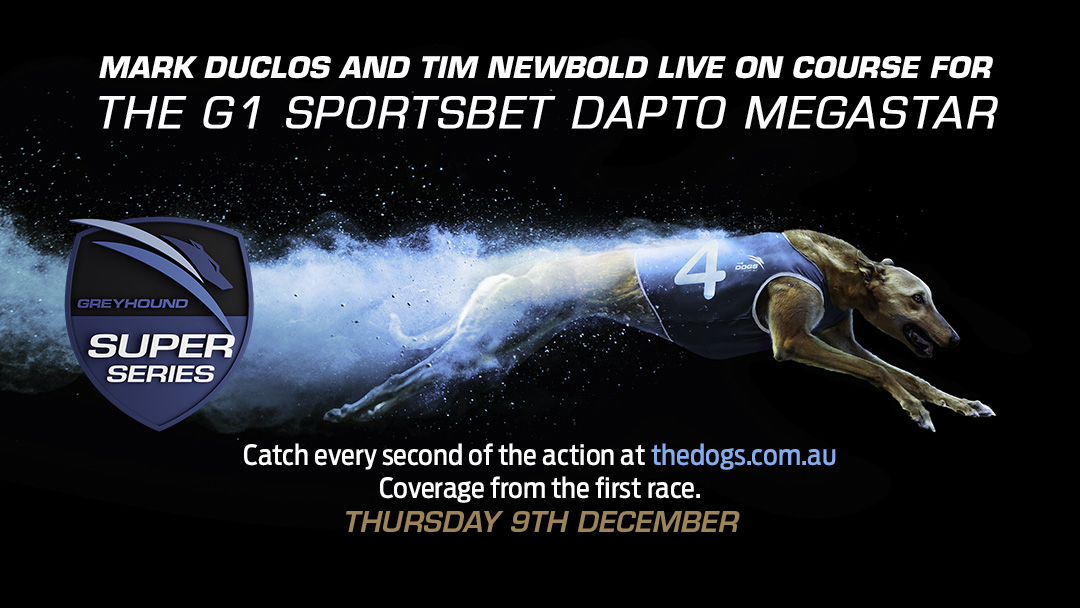 Group 1 greyhound racing heads to the south coast of NSW on Thursday night with Dapto hosting the Sportsbet Megastar.

Bringing you all the colour and excitement from the iconic Dapto track via a special showcase presentation is GRNSW’s Mark Duclos and Tim Newbold.

First conducted in 2009 at Group 3 level, Dapto’s Megastar shifted gears to become the only Group 1 race sprint event conducted on a provincial track in 2013.

On Thursday night, star sprinter Zipping Kyrgios – after winning his heat on December 2 in a near-record 29.40 – seeks to add lustre to his already impressive resume in the $75,000 to-the-winner Megastar.

Punters will rally to support the John Finn-prepared powerhouse, yet he’s drawn box six and, despite a solid record from wide boxes, victory will be hard-earned.

Much better drawn on the inside is Frank Hurst’s Sound Of Silence, a surging 29.82 heat winner from box six.

Sound Of Silence’s story is remarkable.

He stepped up to 600m in early March before registering smart times at Dapto (729m), Wentworth Park (720m) and over Richmond’s 717m during winter.

More recently, Hurst has reverted back to sprinting Sound Of Silence and the son of Fernando Bale won six from 10 since the switch while missing a place only once.

He scored in a smart 29.65 at Wentworth Park and last time he secured box one – his grid position in the Megastar – and a 29.69 all-the-way win was the outcome.

The @sportsbetcomau Dapto Megastar is two days away!#BehindTheBoxes' Mark Duclos & @TimNewbold will be LIVE on course to cover all the action so head to @Thedogs_com_au Facebook page or https://t.co/5kSk1yyifk if you can't make it to the track.#daptogreyhounds pic.twitter.com/Y2G2KFwp2f

Whether Zipping Kyrgios can begin quickly and secure clear running through the first turn is the tangible query.

The Megastar is by no means a ‘two horse race’ yet Sound Of Silence and Zipping Kyrgios – each boasting 22 career wins – are the headline acts.

Group 1 Peter Mosman Opal winner Light And Lily boasts an excellent record at the Showgrounds circuit and will have admirers at odds yet, in recent weeks, Sound Of Silence has twice had her measure at Wentworth Park and, this time, Zipping Kyrgios’ presence adds spice.