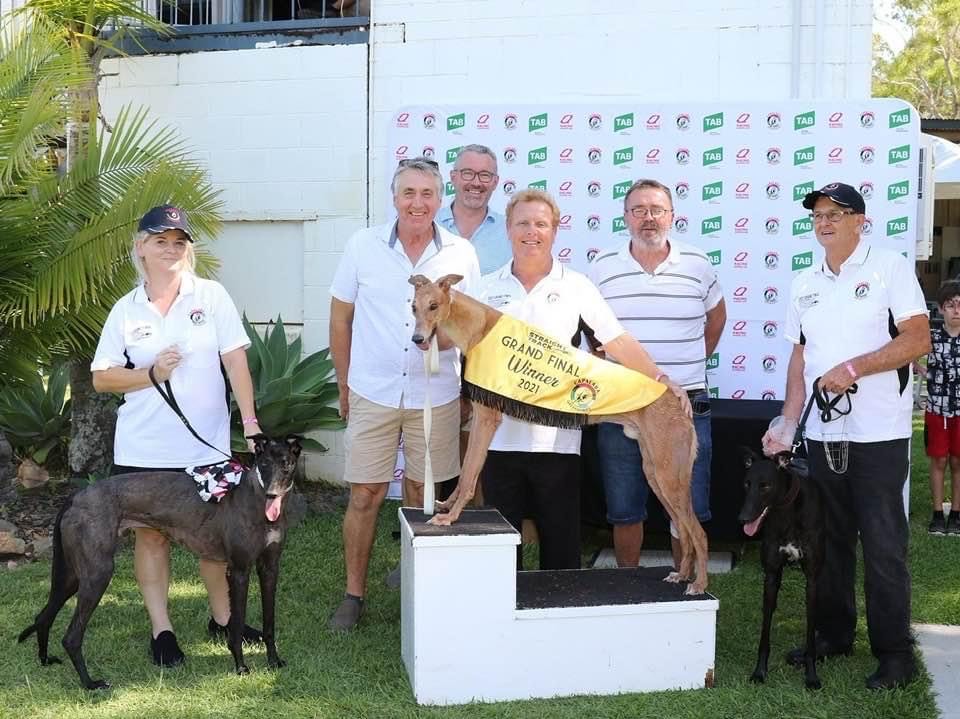 The boys have been mates for decade after decade and they shared in the breeding of Deck Fifty Two by Barcia Bale from Mitchie Madam the dam a winner of 12 races.

Deck Fifty Two, prepared by Innisplain maestro Darren Russell, began brilliantly from the rails and was always in front holding off a determined bid from fellow Queenslander Impact to win by a length in 19.60.

NSW star Olsen Street, for Michelle Lill, was third another two lengths away.

Meteyard has raced Group 2 Gold Coast Cup winner Buckingham Chuck and most of that famous damline, tracing back to foundation bitch Beaut Venture, have been in Noel Noon’s name as breeder.

“Fantastic,” is how Noel Noon described the win. “It’s my biggest thrill in racing.

“When he came up with box one I was never sure how that would suit him because of the interstate dogs drawn outside him. All of them chase an inside lure and I was worried some might crash over onto him.

“But, with 100 metres to go, it was obvious he was holding Impact and was going to win.

“Darren (Russell) is planning on taking him back to the circle now. Maybe a race like the Wauchope Cup, which will be run in the New Year at Grafton, could suit him.”

Meteyard described the victory as “sensational”.

“I’m totally wrapped,” he said. “His mother (Mitchie Madam) will be eight tomorrow and I am going to approach Racing Queensland to breed a fourth litter out of her.

“She has a 12 months old litter by Zambora Brockie, another by Superior Panama, and I’m looking at Mepunga Blazer for her final litter.

“I’ve got to hand it to Kyogle trainer John Watts who came out to the farm near Casino when they were just six months old and told me there was no way I should sell the blue fawn dog.

“That is now Deck Fifty Two. John is not only a good bloke, he is a good judge.”