GRAFTON'S brand new racetrack will be ready to start trialling on May 21 to prepare for the much anticipated first race meeting on June 7.

GRAFTON’S new racetrack will be ready to start trialling on May 21 to prepare for the first race meeting on June 7.

Club president John Corrigan is excited by the progress of work on the new track and kennels and says everything is on track.

“The place looks terrific,” said Corrigan. “We’ve got some great photos of the complex via a drone and the participants can see for themselves how great it looks.” 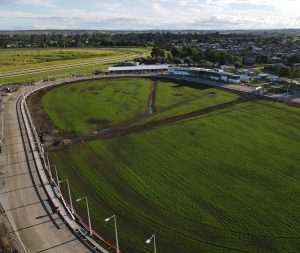 He said the running rail would be completed on Wednesday.

“The lights are up and they will be connected this week,” said Corrigan.

“The outside fence will be started this week as well.

“And the kennel block lining will start going in from today.

“Once that is done the painters will come in.

“After that it will only be the finishing touches around the complex.”

Brian Barrington and his son Darren are putting in the running rail and Brian has told club officials he has never seen a better racing surface.

“We get the complex handed over to us on May 19 and we will start trialling from May 21,” said Corrigan.

“And we want to have plenty of trials between that date and June 7 when we start racing again, just to make sure everything is running as smoothly as expected.”

The club has outlined a superb race program to welcome back greyhound racing to Grafton.

“There will be three graded finals in the first three meetings each of them worth $7500 to the winner,” said Corrigan.