SENSATIONAL Louis Rumble made the Group 2 Ipswich Gold Cup final all his own on Thursday night with an all-the-way victory in 30.29. 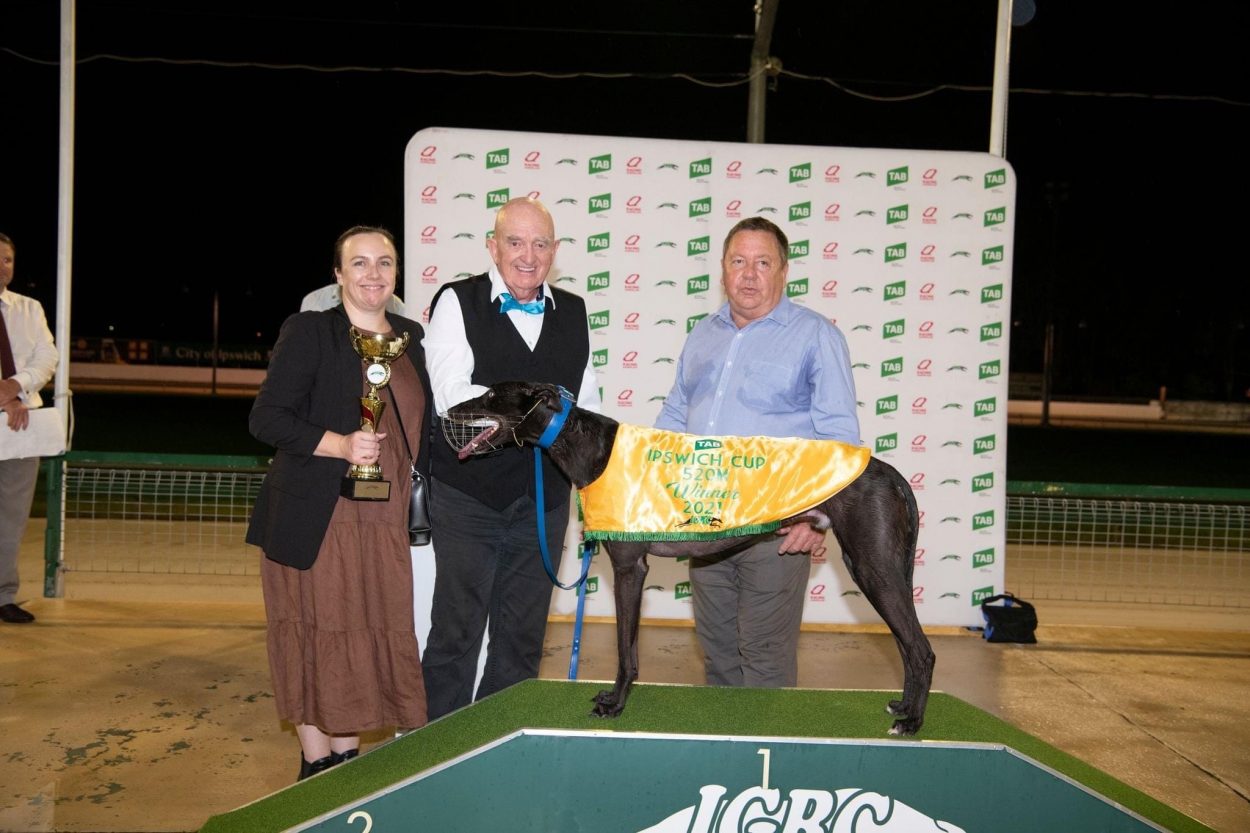 SENSATIONAL sprinter Louis Rumble gave breeder, owner and trainer Steve Kavanagh his first runner and winner in the race when he led throughout to win the Group 2 Ipswich Gold Cup (520m) on Thursday night.

He ran a slick 30.29 on a rain-affected track, although Ipswich missed the expected downpour predicted early in the day.

Racing legend Kavanagh bred, owns and trains Louis Rumble (Fernando Bale-Joyce Rumble) who blazed through a 5.25 opening section to set up the victory.

Louis Rumble had the race in his keeping from box rise when, from the four, he got a dream run to the lead after the five Showdown missed the start.

He scored by four and three-quarter lengths over a game Spotted Elk who chased him throughout with Lily Monelli battling on well for third three-quarters away.

For someone who has won so many great races from Australian Cups to a Golden Easter Egg, Kavanagh was overjoyed at the victory.

“It’s a really big deal,” he said. “I’ve never had a runner in the Ipswich Cup before.”

While Louis Rumble had previously won an Ipswich Young Guns and the Casino Beef Week Cup, he had also been luckless in Group finals.

He has been second in the Lismore Cup, New Sensation and Grafton Cup, but has also been a finalist in the Flying Amy Classic, Townsville Cup, Pop Northfield Maiden and a Young Guns and the Straight Of Origin at Capalaba.

“You keep telling yourself he deserves to win a big race like this,” said Steve. “He’s had a couple of close calls in big races, but he’s also been beaten on his merits in a couple.

“He keeps doing the right thing in his races, and his second section was where he won the race. He put a bit of a gap on those behind him, and they couldn’t run him down.

“And there were a few pretty strong dogs giving chase and they didn’t make any ground on him.”

Kavanagh will check over the dog today and then likely make plans to run in Next week’s Group 3 Casino Cup series ignoring the looming presence of The Phoenix at The Meadows.

“There has been a bit of confusion about that series,” admitted Steve. “Some go straight in, some get picked by the public, some have to qualify.

“Anyway, time is running out for him to look at that series.”

The litter has been a great one for Kavanagh.

Dam Joyce Rumble has a litter by Fabregas just starting to hit the tracks and her third litter, by Pindari Express, are just four months old.

“All three litters are different,” said Steve. “The Fernando litter is quick early, the Fabregas pups look like they will be strong, and the Pindari’s are nice big units.

“We’ve got a dog and three bitches in that litter.”