Melbourne Cup trainer Seona Thompson had one of her proudest moments in the sport when Enemy Within won the maiden final at Sandown. 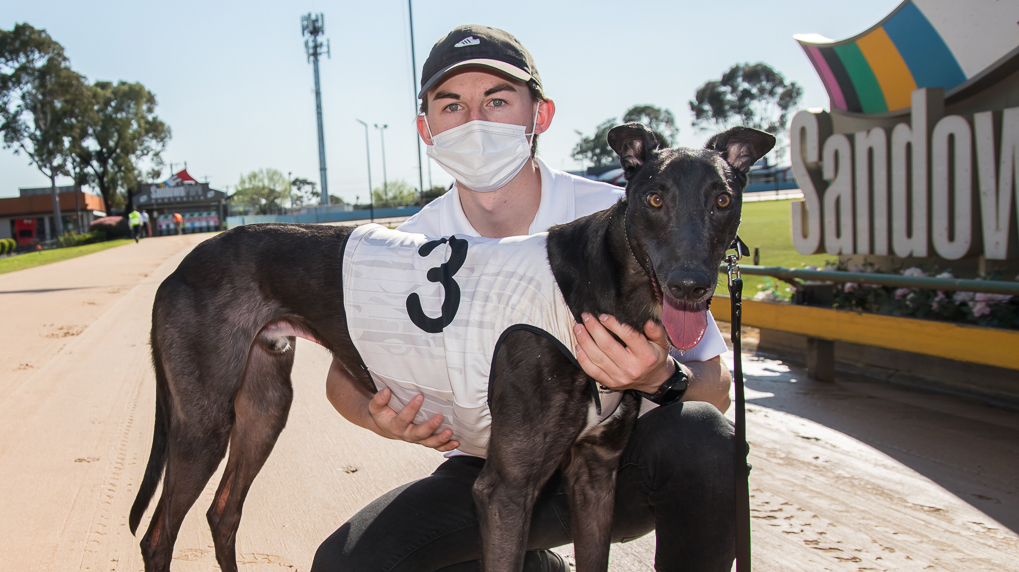 Melbourne Cup winning trainer Seona Thompson had one of her proudest moments in the sport when Enemy Within won the maiden final at Sandown Park yesterday.

It’s a moment that was years in the making as Enemy Within is home grown progeny from the Thompson’s Pearcedale property. His mum and dad, Miss Hannigan and Aston Dee Bee, are a big part of the family.

“I watched the race at home with my daughter Sophie and to say I was excited is an understatement – I was crying and shaking,” Thompson said.

The origins of the story stretch back to 2014 when the family identified West Australian sprinter Te Amo as a potential breeding prospect.

“We really wanted to buy Te Amo (mother of Miss Hannigan) but she wasn’t for sale. I met her owner Michelle Roma a few times when I was over in Perth and knew how much she loved her dogs.”

“When she had a litter we wanted to buy one from it, my nephew (Cain Dyett) bought one as well and he (Notorious Mac) went around in a Melbourne Cup final, West On Augie was in the race as well who was also from that litter.”

Miss Hanigan had 80 career starts though plans from the start surrounded breeding.

Enemy Within takes out the first!

“It was an obvious choice to use Aston Dee Bee as the sire. We own all five from the litter, two have raced so far and the other three aren’t far away.”

The choice was obvious to use Aston Dee Bee, or ‘Nero’ as he’s known at home, as he’s been a long time part of the family and provided them and owner Ray Borda with their 2017 TAB Melbourne Cup triumph.

“He’s my pride and joy, but I’m pretty biased.”

Enemy Within, or ‘Bronson’ as he’s known, was named after an American TV series.

“We always keep a list of names that we like. Yesterday I found out that Dave Pringle’s (rearer of Enemy Within) dad also trained a dog named Enemy Within many years ago, so it was ironic.”

Bronson is part-owned by Kathryn Lincoln, wife of Sky Racing’s leading greyhound presenter Jason Lincoln. The pair hadn’t had much luck in the past when venturing into ownership which led the Thompson family to try and help turn that around.

“We’ve been good friends with Jason and Kathryn for a few years. When we realised Bronson had some ability we decided to give the Lincolns a share. I only told them a week or so before Bronson had his first start at Geelong.”

“From when he was entered to when he raced I don’t think Jason slept, he was too excited.”

“They’ve had some wins in country New South Wales over the past 12 months but nothing like winning a race at Sandown.”

“I think they’ve watched the replay about 50 times. I’ve been ordered to get them a big photo for their wall at home – they’re rapt and really appreciative. It’s nice to share it with good people.”

Given the context, Thompson said it was one of her proudest moments in the sport.

“For me I would say I was equally as proud as when Aston Dee Bee won the Melbourne Cup. Which people may laugh at given it was a maiden final, but these dogs are a part of our family and it was a really special moment.”