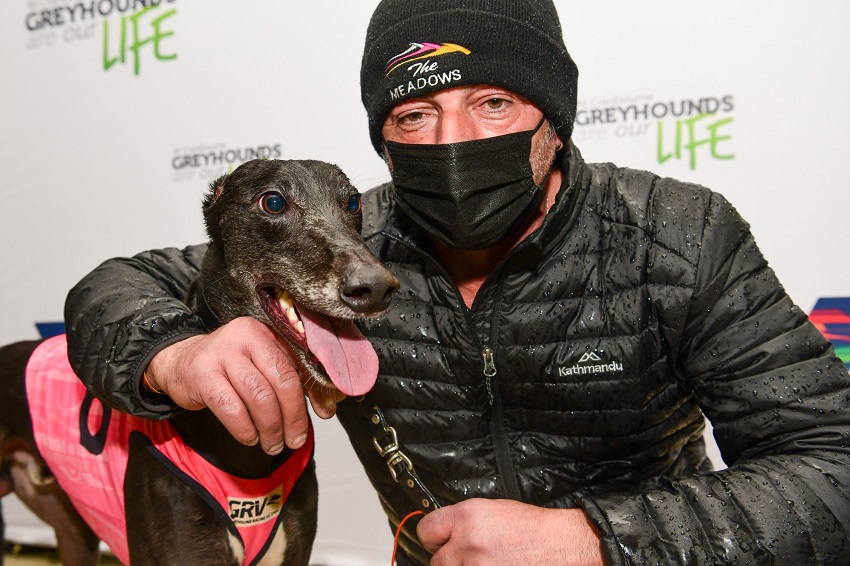 And at Sandown Park on Friday night the son of Barcia Bale takes his first leap towards realising that potential when he steps out in the third and final heat of the Group 1 Bold Trease (715m).

“Right from the start of his career it’s always been in the back of my mind that in time he’d furnish into a very good stayer,” Briganti said.

“Early days he had a bad constitution and was a bit of a thinker in his races so I’ve just had to bring him along slowly and let him find his feet.

“I took him away for a trip to Sydney last month and he’s matured a lot which they can do. I’m really happy with him going into Friday night – he’s done everything I’ve asked.”

The most recent win at Shepparton – extending his record to 14 wins from 34 starts – ran in an explosive track record 36.88.

“Those 650 races on the big one-turn tracks are tougher runs than what a lot of people might think,” Briganti said.

“To me they are like running 700 in town so the fact he’s run them out like he has gives me confidence going into Friday night.

“But I’ll still have my heart in my mouth the last 50 metres or so as the run will do him good.”

Tab.com.au have installed Manila Knight at $4.40 for his Sandown Park 715 metre debut with favouritism held by Sunset Bourbski at $3.40.

Sharing the next line of betting is seasoned stayers Just Terms and Blazing Cartier at $4.40 apiece.

And while Briganti is confident his charge is primed for a forward display at his first group 1 showing, he does admit to being concerned about being scheduled in race 11.

“It is a concern as he’s a dog that can get himself fizzed up in the kennels,” Briganti said.

“I can’t get my head around how there’s three heats of the Bold Trease and they are scheduled as races one, two and 11. It makes no sense to me and I’ll be raising it on Friday night.

“It means I’m not going to know how he is until I get him out for the race. But if he’s gone to pieces it’s definitely a worry – especially over 700.

“I think he can run between 41.50 and 41.70 and if that’s good enough to win so be it but if a strong one gets him late and he qualifies he’ll be better again for next week.”

Briganti is represented in heat two of the Bold Trease by 23-month old Pilbara, the son of Fernando Bale facing a baptism of fire for his first group race assignment.

“I’ve thrown him to the wolves but the experience will do him good,” Briganti said of the $34 chance.

“Everything with him at the moment is a view too in six months time but it wouldn’t surprise me if he finished first four on Friday night.

“He’s got his box and will push through from the inside. It’s all a learning curve for him. But it’s a hot field he’s facing so an upset is probably out of the question.”