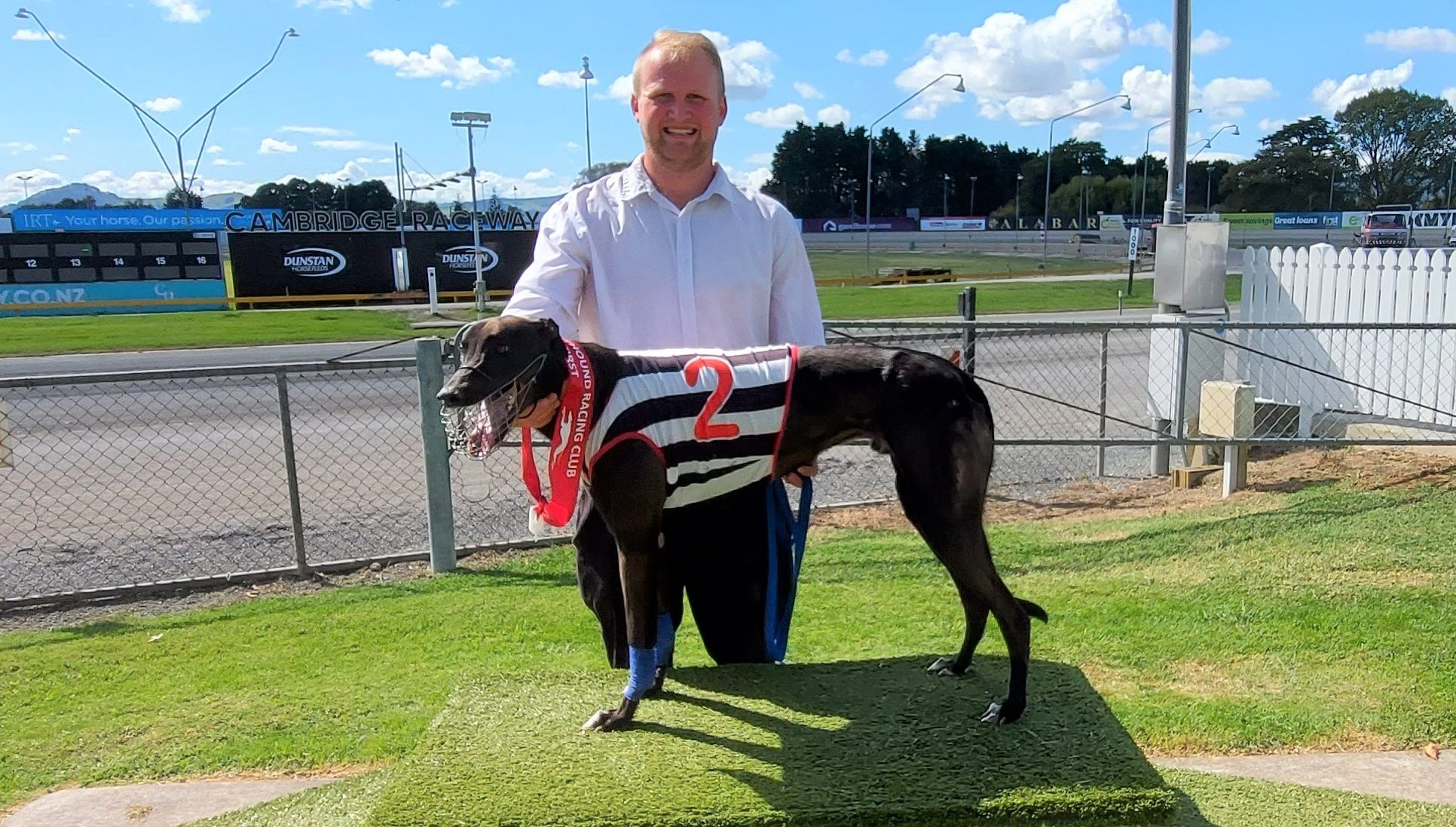 Taking time honours from those heats was the Tony Hart prepared Master Porthos (pictured) who skipped through his assignment in a tidy 25.29s.

Hart is rapt that Master Porthos has drawn the eight-trap as he explains.

“Perfect for him – he will love jumping from out there from where he can set the pace.”

The Canterbury trainer bookends the NZ Derby field with Diego Jem occupying the rails trap following his freewheeling 25.40s heat win. It was his first look at 457m racing and he handled the task with ease.

“He maintained a real strong run throughout which was awesome to watch. If anything I expect him to be improved from the experience,” suggested Hart who also confirmed both of his contenders pulled up in great nick and are ready to rumble in the final.

The Hart trained NZ Derby pair face the might of the potent Dave and Jean Fahey kennel where three of the four Opawa Racing finalists are mentored from.

Opawa Wayne was the other heat victor, when after making a moderate start, he bolted clear for his 25.42s heat win. The recent Auckland Cup runner-up will step from the five-trap.

“He needs to jump better in that field. He is a strong dog, who will be right in the finish with a clear run,” advised Dave Fahey.

The talented Opawa Superstar will be seeking redemption after a moderate start saw the dual Group 1 winner chasing home Diego Jem 4.75 lengths astern of him when having his first look at the Cambridge circuit.

“I felt he got a bit lost in his heat and I consider he’s a better dog on two-turn tracks. I reckon he will have benefited from the outing and yes he can feature here,” added Fahey who will load him away into the seven-trap.

Opawa Goat wound up a distant 11.5 length third to Master Porthos when also making his track debut. He secures trap-four in the decider.

“He was fresh-up in his heat and needed the race. I feel he’ll take a fair amount of improvement from last week. All three of them came through last week okay,” confirmed Fahey.

Just one Australian bred greyhound made the final with Gary and Sandra Fredrickson advancing the Melbourne owned Hint Of Mint. He led the vain task chase after the slippery Master Porthos, greeting the judge 8.5 lengths behind.

It is a massive afternoon of chasing action at the Cambridge hosted premier meeting where another three Group 2 finals will be decided.

Star stayer Know Keeper has been on a demolition spree during his staying assignments, winning all 12 of his distance races, racking up track records in doing so for his conditioner Garry Cleeve.

He takes his place in the race 6 747m staying feature which also includes the promising up and coming stayer Portia.

Her locally based conditioner Arch Lawrence is a genius in breeding and preparing staying greyhounds and he also provides litter sister Shanmaria and the previous 747m winner Little Teegs, all of whom add intrigue to the event.