Anthony Azzopardi doesn’t have any expectations heading into Thursday's Shootout where McCooly’s Lad will continue his remarkable return from injury.

Anthony Azzopardi doesn’t have any expectations heading into Thursday night’s Group 3 Shootout (515m) at Sandown Park, where his brilliant speedster McCooly’s Lad will continue his remarkable return from injury.

But if McCooly’s Lad, which is $6.50 in TAB’s market on the four-sprinter feature, can upset last start G1 Topgun hero Aston Rupee, the raging $1.40 favourite, it won’t be the first time he’s surprised Azzopardi.

A year ago when McCooly’s Lad suffered a career-threatening hock injury, vying for the title of the fastest greyhound in the country and preparing for a tilt at the G1 Melbourne Cup were nothing but pipe dreams for Azzopardi.

But McCooly’s Lad defied the odds and returned to the track in August, winning his first three starts, including a blistering 29.11sec victory at Sandown Park, where he’d also clocked 29.09sec and 29.14sec prior to injury stalling his career.

“We’re not expecting any result on Thursday,” said Azzopardi candidly.

“It’s a thrill to have him in a race like this after what he’s been through – it’s not bad with a couple of screws in his leg – and we’re using it as a lead-up run to the Melbourne Cup heats.”

McCooly’s Lad, the winner of eight from 13, comes into the $25,000 winner-take-all Shootout off a short let-up.

The regally bred son of Fernando Bale and Tatty Fields hasn’t been seen in action since October 7, when Azzopardi thought his worst fears may have become reality when he dropped out after meeting interference when vying for the lead at Sandown.

“I thought it might have been his hock but he hurt a calf muscle,” Azzopardi explained.

“It’s a privilege to be in the Shootout, but that’s how good the dog is going. If he wasn’t going that good I obviously wouldn’t have put him in it.

“I actually nommed him for the Shootout and the Melbourne Cup preludes and to be honest I didn’t really expect to get in the Shootout.

“We know what we’re up against.

“Aston Rupee is the fastest dog in the country and don’t forget about the other two either. They’re both great dogs. Tiggerlong Tonk is a real warhorse.

“McCooly’s Lad has got to be in front to be any chance of winning. You’re not going to run down Aston Rupee.” 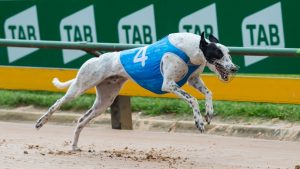 Azzopardi won the Shootout in 2016 with Zambora Brockie, while Whiskey Riot was a close second to Hooked On Scotch in 2019 en route to Melbourne Cup glory and the high profile Rowsley mentor compares McCooly’s Lad favourably with the all-star duo.

“Ability-wise he’s right up there with them; he’d be faster than Whiskey Riot but Whiskey Riot was the most professional race dog I’ve ever had, “ Azzopardi explained.

“I call Whiskey Riot the best because he always got the job done.”

Azzopardi also has two exciting youngsters lining up in the final round of Melbourne Cup preludes in Ben Mayo and Substantial.

Ben Mayo, which has won four from eight, including a scorching 29.14sec Sandown success, faces a daunting task against superstars Koblenz and Typhoon Sammy in prelude 13 (race 8), but Azzopardi is extremely bullish about his long-term prospects.

“You’ll be hearing about him next year!” he said.

“He’s very inexperienced but when he puts it all together he’s going to be a serious dog.

“I’m not afraid to put young dogs in with the good ones. I know he’s as quick as them and it will be a great experience for him.”