Megastar Status On Offer At Dapto

​A grid position in The Phoenix eluded Good Odds Cash, Zipping Kyrgios, Light And Lily and Bandit Ned yet opportunity knocks at Dapto in Megastar.

​A grid position in The Phoenix at The Meadows on December 18 eluded high class sprinters Good Odds Cash, Zipping Kyrgios, Light And Lily and Bandit Ned yet opportunity knocks for the quartet at Dapto on Thursday.

Four quality heats of the Group 1 Sportsbet Megastar highlight the 11-race card and the series kicks off with an engaging contest where it’s youth verses experience.

Kantarn Bale might not have prevailed in Adelaide yet, at start eight and just 21 months of age, he snared the Group 1 Melbourne Cup at Sandown.

Ties That Bind has won her only four starts at Maitland and Wentworth Park in style yet as promising and talented as she is, taking on the likes of Zipping Kyrgios (21 wins), Ebby Infrared (44 wins) along with Lock Master, Handsome Rhino, Coast Model and Princess Forty represents an immense challenge. 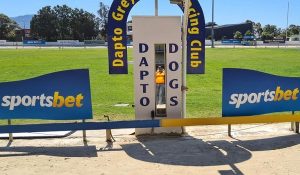 From box one, it’s Bandit Ned’s race to lose yet Group 1 Peter Mosman Opal winner Light And Lily (box seven) has a real affinity with Dapto.

Good Odds Cash was luckless in The Flight To The Phoenix at Wentworth Park on November 27 and she protects an unbeaten record at Dapto in heat three.

The daughter of Collision last raced at Dapto on August 12 when thwarting Zipping Kyrgios to score in a fast 29.51 – only .01 outside her personal best at the track.

In five starts at Dapto, Good Odds Cash has comfortably bettered the 30 seconds mark and has proven adept from all boxes.

This time she exits the two alley for trainer who is no stranger to Megastar success, taking out the race with Good Odds Harada in 2019.

Good Odds Cash takes on The Flight To The Phoenix finalist Special Blend, track specialist Winlock On Top and the smart Tarawi Ted but she’s the one to beat.

Free For All sprinters Fire Legend and Sound Of Silence have a class edge in heat four yet opportunity rather than ability might determine the outcome.

Fire Legend has drawn box eight – an alley he excels from – while powerhouse Sound Of Silence is new to Dapto but has been racing in career best form at Wentworth Park.

He exits box six yet has the advantage of box five being vacant.

The four Megastar heat winners and runners-up snare a place in the Group 1 Final on December 9.