“Very excited about getting him,” said Nick.

Shakeel Latimer’s great son of SH Avatar-See Blue’s Girl has joined such racetrack stars as Get It Gizmo, Houdini Boy, Moreira, Flynn, Baroooga Brett and the US great LK’s Crush N It.

“We all saw how he completely demolished the Million Dollar Chase field that included champions like Tommy Shelby and Flying Ricciardo,” said Nick.

“He’s a magnificent 33 kilo dog, by SH Avatar a hall of famer in the US and great sire here, and out of a bitch who was a Group performer on the track and from one of the great female families.

“He arrived in great order. Peter (Lagogiane) has a big kennel of race dogs and is very busy with them. Handsome Prince is a great addition to our team.

“We are very happy with the response to them all.” 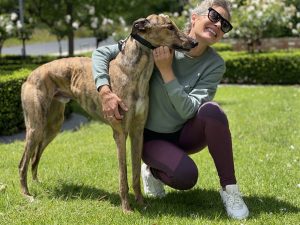 His dam See Blue’s Girl was a finalist in the G1 Hobart 1000 and her litter brother, Top Prospector, won the G1 NZ Spion Rose.

Congrats to Handsome Prince, who was voted 2020 @TasracingAus Greyhound of the Year at the Awards night on Sat! 👏👏👏

Handsome Prince won 6 races & was placed on 6 occasions in Tas, before racing in both NSW & Vic where he won a further 3 races inc. the Million Dollar Chase. pic.twitter.com/4HTeNhk9sK

Bitches with Dyna Lachlan in their pedigree are a MUST for Handsome Prince.

Nick said reports on some early pups of Flynn and Get It Gizmo had created much interest in them.

“Mick Hardman is rearing some pups by Flynn and he especially rang me just the other day inquiring about Flynn,” said Nick.

“Lisa and I are particularly happy with the response to all the stud dogs. There is a lot of interest in them.”