WHEN 40-time winner and Group 1 star Worm Burner retired to stud back in 2016, like all stud dogs he needed a "big dog" to hit the scene. 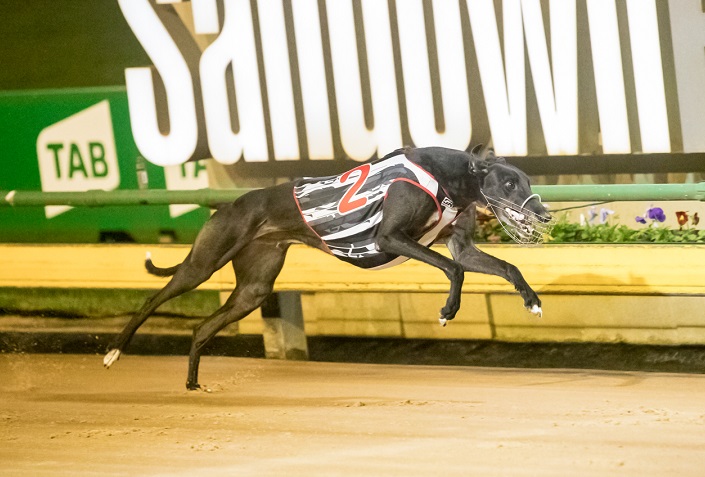 WHEN 40-time winner and Group 1 star Worm Burner retired to stud back in 2016, like all stud dogs he needed a “big dog” to give his new career an instant boost.

Now Mister Harlewood (Worm Burner-Miss Woods by Miagi) is going to stud himself and he retires with an imposing racetrack career behind him and a pedigree that gives him a superb chance to succeed.

Trained for most of his career by legend Victorian mentor Jeff Britton, Mister Harlewood was never a “cotton wool” champion. He raced 74 times for 23 wins, 15 seconds and 12 thirds taking home stakes of $135,000.

How good was Mister Harlewood?

His wins came at The Meadows and Sandown, Wentworth Park and Angle Park, as well as Warrnambool, Geelong and Gawler. He won from 400m to 725m and everything in between.

But, Mister Harlewood was a trip Group 1 finalist. As well as that Vic Peters he also made the Australian Cup and WA Galaxy finals.  He lined up in the final of the Group 3 Cranbourne Classic and the Maidment Memorial.

He was a very, very good race dog and multiple city winner against the best around.

Mister Harlewood’s litter sister, Miss Bellwood, was also a Group 1 finalist in the Adelaide Cup  and also made the finals of the Group 3 SA Oaks and Group 3 Johnstone Memorial.

All nine of the Worm Burner-Miss Woods litter were winners and it also included Miss Takiri (19 wins, $54,000) etc.

ICYMI: MISTER HARLEWOOD (6) proved there is no substitute for class at Geelong

His sire Worm Burner (Oaks Road-Little Looper) was a superstar.

This is the very famous direct damline of imported Irish bitch Tinahue Knock who boasted some of Ireland’s greatest coursing bloodlines.

Her daughter, Maudie, the fourth dam of Mister Harlewood, became a superstar at stud highlighted by her daughter Fibba’s win in the Group 1 Australian Cup with littermates Superbee and Fraud chasing her home.

The pedigree of Mister Harlewood shows an intensity of the Wee Sal female family coming via Brett Lee and his close relation No Intent. His dam Miss Woods is bred on the famous True Temptation/Flying Amy cross. They are virtual sisters.

Future matings for Mister Harlewood could centre around a number of proven themes.

The fact he has Hallucinate through a son (Miagi) in his damline means Mister Harlewood is ideal for matings to Barcia Bale bitches to brings in a duplication of Hallucinate but balanced via male and female.

This can be achieved via daughters of Orson Allen, Tomac Bale, and more recently West On Augie.

The proven cross of Hallucinate and Where’s Pedro will also be a key for matings to Mister Harlewood. This can be achieved via daughters of My Bro Fabio, My Redeemer, Allen Deed, Mister Twister, Moreira, Ritza Lenny etc.

Interesting too is the fact Miagi (damsire of Mister Harlewood) has a cross of Ultimate Wish in his direct damline.

This is the famed Genuine Replica family. It is a family that has done well when reinforced within itself. Examples of this include Lightning Frank and True Detective.

Which means daughters of Zambora Brockie and Ritza Lenny (both from the Genuine Replica family) will be ideal for matings to Mister Harlewood.

Reinforcing the “Portrait” family of which Primo Uno is such a force, will also suit. Cosmic Chief is a significant example of this family and so is Meticulous.

Mister Harlewood is the favourite for Thursday night's Victorian National Distance Championship on Thursday night, but it's the baby of the field that the punters have come for early.

Bitches with Magic Sprite, bred on an identical cross to Mister Harlewood’s grandsire Oaks Road, could also play a significant part in his stud future.

Mister Harlewood was a powerful runner. He was a Group 1 sprinter who stretched his strength to a distance. He comes from a highly successful litter, from a dominant damline, and has many, many options to attract broodbitch owners.