TARQUIN Neal is still trying to come to terms with the fact he had won a group final after Sushi Mango landed the Ipswich Auction on Saturday. 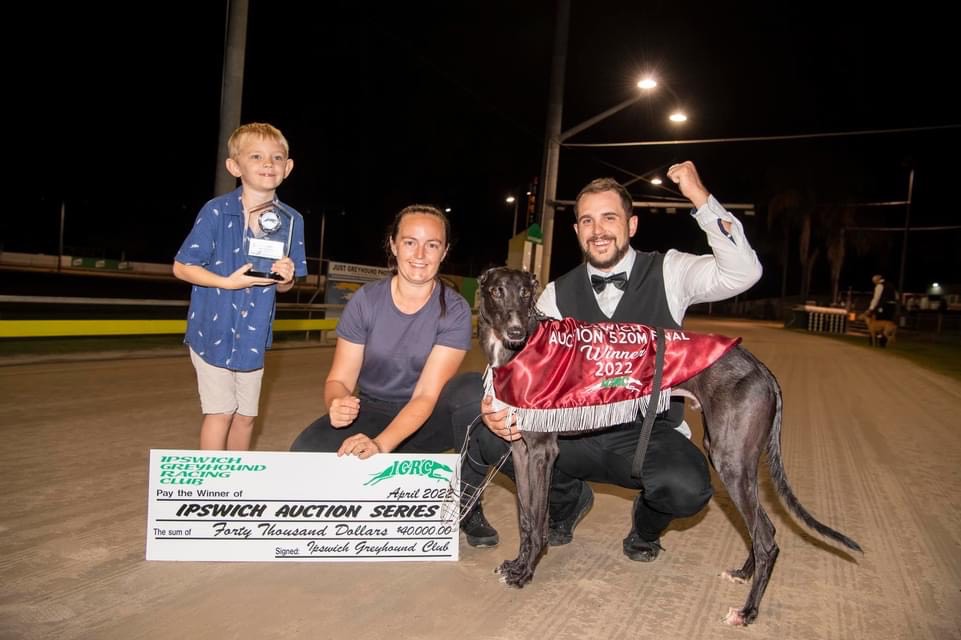 GREYHOUND racing newcomer Tarquin Neal was today still trying to come to terms with the fact he had won a Group final after the “quirky” named Sushi Mango landed the Group 3 Ipswich Auction final (520m) on Saturday night.

Neal, 32, has been in greyhound racing only a couple of years, had only his first city winner a couple of weeks ago, and was just happy to have a runner in the race.

Hot favourites Tungsten Miss and Media Rights were their own worst enemies tangling up early and then through the first turn.

“I’m over the moon,” said Tarquin. “I thought the four (Desley’s Girl) would lead early and my bloke might struggle with so much pace drawn inside him.

“But once he got clear early I started cheering. It was all over.”

The Group victory was meant to be.

“I spent 13 years in the Army and was in Townsville when I started training a couple of dogs,” said Tarquin. “I wanted to give it a red hot go but at the time could not see a big future training in Townsville.

“Racing Queensland had come north and virtually told us we would not get a second race meeting at the track each week. I decided to pack up and head to Brisbane.

“But, not long after Townsville did get a second meeting each week and now racing up there is absolutely flying.”

Tarquin remembers heading to the Ipswich Auction with the plan to buy a few pups.

“Every time I bid on one it was a buy back and I couldn’t manage to buy any,” he said.

“I was talking to Jeff Crawford and he told me he and Jane were planning on selling all the Zambora Brockie-Smashing Sally litter.”

Smashing Sally had won the Group 3 Richmond Oaks and was a finalist in the Group 1 National Futurity and Group 3 Ladies Bracelet.

And how did that name come by?

“I like to come up with weird, funky names,” said Tarquin.

“I was at home eating some sushi and having a mango drink with it, when on the TV came my favourite comedy group Sushi Mango.

“I was looking for an eighth and final name choice to put on the list for this pup. That’s what he got.”

Tarquin has only three dogs in training and a few pups coming along, eight dogs in total.

“I was out of control when he won,” he admitted. “It was pretty emotional for me considering I’d only had my first metro winner a few weeks back.

“To make the race was really exciting but to actually win it, I just can’t explain it.

“I have no plans for him right now, but one thing is for certain, he will have a home with me forever. And, he never needs to win another race.”

Karen Tribe’s rank outsider Petite Swagger finished on well for second and Ipswich Auction sprint winner Red Buzz got home well for third. Sushi Mango had been a finalist in that Auction Sprint behind Red Buzz.

The Jedda Cutlack kennel got some compensation for the loss of Tungsten Miss with She’s Sweet’s victory in the Auction Consolation.