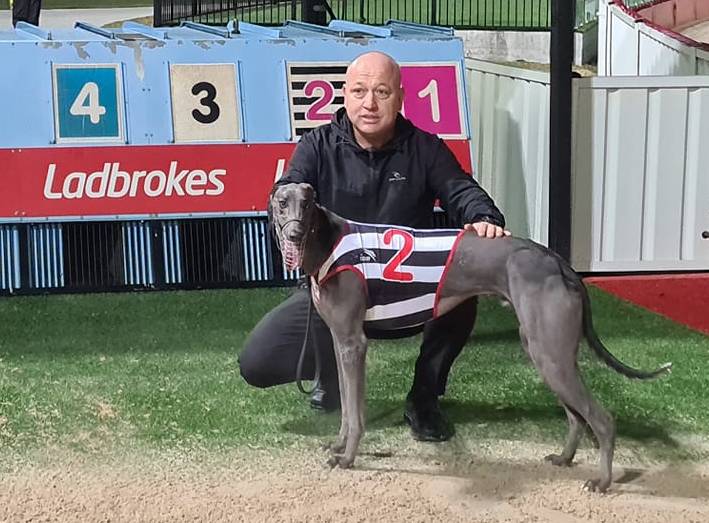 And during that time, Tony knew only too well the ability of the Mackay-trained Zipping Garth, the unbeaten potential superstar which retired to stud after a career stopped short.

Tony put Miley Nismo to Zipping Garth and the result is a dog he has named Denver Nismo and he is staggered at the ability the pup is showing from just a handful of early trials.

So much so that Tony is heading Denver Nismo to the time-honoured Butch Monkley Maiden series, the former Wauchope feature now being run at Grafton.

Denver Nismo this week went to Grafton for his first look at the track and only his second run from the boxes since education and clocked 19.70, just .01 outside the track record held by speedster Orara Dan.

Tony was the least surprised by the performances. Denver Nismo has been running those sort of times since his education first started.

“He went to Gunnedah for education,” said Tony.

In Tony’s own education of the youngster, he slipped him at Maitland and first-up he went 16.82.

“The first time out of the boxes he ran 22.38 at Maitland,” said Tony. “I wasn’t expecting anything like those times.

“That’s when I decided to head to Grafton with the Butch Monkley in mind.”

Despite the near record Grafton trial, Tony still has some caution about Denver Nismo.

“It was only his second time out of the boxes since breaking in, and he has never been with another dog,” he said.

“But, after the Grafton trial he would not blow out a candle so I’m pretty confident he will get 500 metres.”

Tony reported four bitches from the Zipping Garth-Miley Nismo litter had been sent to education and promptly came on season.

“All four of them,” said Tony. “But the reports about their early trials is they too are something special.”

Miley Nismo has since whelped a litter of five dogs and four bitches by Zambora Brockie in June.

None, says Tony, are for sale.

Just this week Zipping Garth surpassed 200 winners in his introduction to stud with his strike-rate exceeding an outstanding 20 per cent.