SANDRA Spratt admits to shedding a tear after Lochinvar Chase made a successful return at Richmond’s first straight track meeting on Saturday. 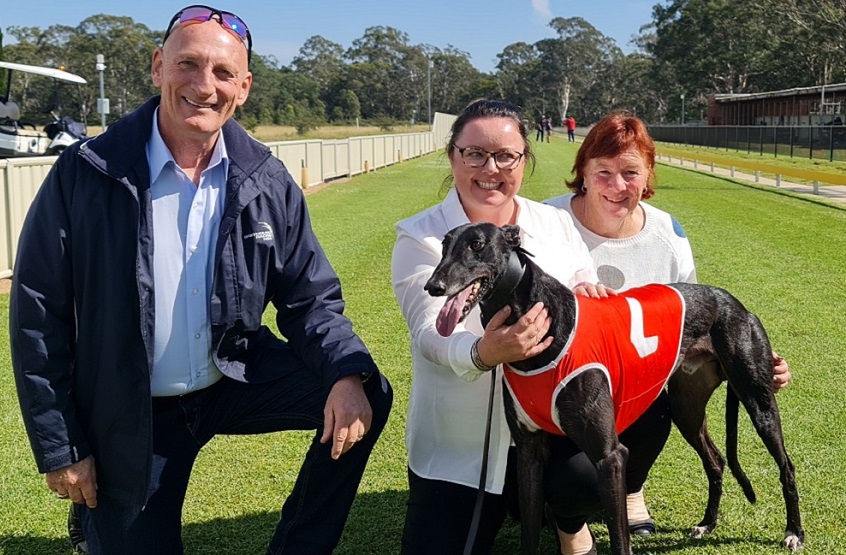 TRAINER Sandra Spratt admits to shedding a tear or two after Lochinvar Chase made a successful return to racing at Richmond’s inaugural straight track meeting on Saturday morning.

Stepping out for the first time in 2021, Lochinvar Chase carved out a slick 17.72 to take out the final event in comprehensive fashion, the son of Barcia Bale’s tenth victory from his injury interrupted 14-start career.

“I was a bit teary-eyed because it’s taken so much to get him back and racing … he’s such a beautiful dog, we love him here at home,” Spratt said.

“It’s been a long road with him and straight track racing couldn’t have started at a better time for Chase.

“For now the plan will be to keep him there but at some stage I’d like to see him back to the circle. But that won’t happen unless I’m 150 per cent certain he’s right. I’ll let him tell us.”

It was mid-July in 2019 that Lochinvar Chase launched his career with a flurry of eight-straight victories for trainer Robert Smith who sadly passed away in February.

At his last start for Smith at Gosford last May, Lochinvar Chase broke down with a serious back muscle injury with his future as a racing prospect uncertain.

“I had a look the other day and couldn’t believe he’s been here for almost 12 months now,” Spratt said.

“(Owner) Kevin Gordon gave Chase to me after he broke down because he knew we’d look after him and we’re really grateful for the opportunity. I think Kevin was happier than me after he won on Saturday.”

Saturday’s winning run was Spratt’s second go at returning the highly touted youngster to the races.

“We got him back at Bathurst in December and he won breaking the first section record but the next week his back muscle went again which put us back to square one,” Spratt said.

“It’s hard to make any big plans with him because of the back muscle but if he does get back to the circle it won’t be on tight tracks. The new Grafton track might be an option later on.”

Once dubbed the next big thing of greyhound racing, it was this time in 2019 that Lochinvar Chase was at the pointy end of betting for a swag of big races, including the Million Dollar Chase.

And while reaching those lofty heights have likely been cruelled due to injury, it matters not to Spratt.

“Just to have him back racing is a huge win for us,” Spratt said.

“And Saturday was the first time I’ve ever been to a straight track meeting so it was a great day to be part of with the atmosphere.

“But it was definitely worth it and for now racing up the straight is the best thing for Chase so that’s where we’ll be.”

Spratt wasn’t the only one elated with Lochinvar Chase’s first-up victory with punters backing the prodigious talent from $2.90 into $1.65 from when markets opened.

His 17.72 winning time was just outside the 17.67 recorded by the Charlie Gatt-trained My Buddy earlier in the card.

“He was a bit slow away on Saturday – but he’d had a big day with the long drive then sitting in the kennels until race 12,” Spratt said.

“It would have been nice to go the quickest time but the main thing was he won and got through it safely.