No Secret To Aussie Secret's Chances At Stud

IT is a massive tribute to a stud animal's ability to be able to produce offspring on the racetrack regarded even better than themselves. 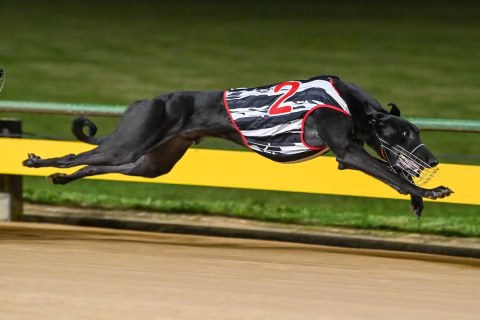 IT is a tribute to a stud animal’s ability to be able to produce offspring on the racetrack even better than themselves.

Take those now champion thoroughbred sires I Am Invincible and Written Tycoon. I Am Invincible had three different trainers and won five of 13 starts for stakes of $270,000. He initially went to stud at a service fee of $11,000 and is now $220,000.

Head to the world of greyhound racing and Victorian-based Bernardo can be put in much the same mould. He won 13 races and earned $99,000 and was second at Group 1 level.

But, just like I Am Invincible and Written Tycoon, Bernardo got his chance at stud.

One of his first to race was Aussie Secret (Bernardo-Sunset Believer by Fabregas) the winner of 33 races and $264,000 who along the way picked up a G1 Hobart 1000, the inaugural Pink Diamond at Bendigo, was a finalist in the G1 Silver Chief and Melbourne Cup and the G2 Horsham and Ballarat Cups.

Aussie Secret now retires to stud, just weeks after his devastating Hobart victory, and like his father, he retires to take on some of the greats of the stud game.

But, Aussie Secret goes to stud with much going for him, a race career the envy of most, a pedigree to suit the majority of broodbitches, and an in-bred pedigree but with a touch of outcross to suit all options.

In all, Aussie Secret raced 65 times for the Jason Thompson kennel. He won 33, was second in 10 and third in seven. His wins came at Bendigo, Warragul, Sale, Geelong, Warrnambool, The Meadows, Sandown, Ballarat and Healesville.

If that in itself doesn’t convince broodbitch owners he was a versatile, hard chasing, Group star … then what does.

Robert Bean, who bred Aussie Secret, put together a slick pedigree that boasts a damline that continues to toss up quality gallopers.

There are numerous high class gallopers to come from this family.

Aussie Secret will get his chance at stud.

Can Aussie Secret become the 19th greyhound to win the TAB Melbourne Cup from the inside draw? We'll find out this Friday night!🏆 @sandowndogs @GRV_News pic.twitter.com/LrnBGzOOVS

Having Fabregas as his damsire makes him ideal for matings to daughters of Fernando Bale because that pair have such a successful “nick”.

Fabregas also has a cross of Larkhill Jo in his direct damline and the link to his half brother Sonic Flight has been hugely successful. Bitches with Bekim Bale, Jarvis Bale and his son Allen Deed will ideally suit Aussie Secret because of this.

Aussie’s third dam Bogie Skye is bred on the same Surf Lorian/Placard cross as Qld great Cyndie’s Magic (by Magic Sprite) so daughters of the Carruthers stud dog star will also be a natural for him.

The cross of Collision (via his son High Earner) in Aussie Secret allows a reinforcement of that great sire ideally through his daughters. And bitches with Collision’s close relation Cosmic Rumble will also suit.

Bernardo has sired Group quality offspring out of a daughter of Barcia Bale (i.e. Dr Tucker), so bitches with Barcia in their make-up, naturally, will suit Aussie Secret.

This is the famous KC And All sireline that has produced Striker Light (from the Gay’s Fancy damline), Orson Allen (from a sister to Barcia Bale), Aston Rupee (from Aston Dee Bee’s sister) etc. It is the Gable Dodge direct sireline … the same as Fernando Bale.

These proven cross open up plenty of proven options for breeders.

Zambora Brockie, Don’t Knocka Him, Zulu Zeus are all options to bring in special crosses to help Aussie Secret succeed at stud.

There is not one cross of the famous brothers Hallucinate, Where’s Pedro, Carnage etc in the pedigree of Aussie Secret, nor is there any of their legendary sire Brett Lee. It would thus make sense to introduce this into his offspring.

Aussie Secret was devastating in the Group 1 Hobart 1000, a time honoured sprint that has attracted some of the true greats of racing. He proven himself against the greats.