TRAINER Brett Nye is doing his best to soak up what he says is a “whirlwind experience” leading into Saturday night’s Group 1 Australian Cup Final.

ROOKIE trainer Brett Nye is doing his best to soak up what he describes as a “whirlwind experience” leading into Saturday night’s Group 1 TAB Australian Cup Final (525m) at The Meadows.

In possession of his trainers licence for just over six months now, Nye scored the biggest win of his brief training career when Last Hurrah thundered into this weekend’s Group 1 Australian Cup with a powerhouse heat win at The Meadows on Saturday night.

Add to that news on Monday that the Nye-owned, Jamie and Brooke Ennis-trained Barooga Brett was crowned 2019 Meadows Greyhound Of The Year, and it’s reasonable to suggest it’s been a week the novice trainer won’t forget anytime soon.

“Jamie Ennis called me yesterday with some advice just telling me to keep cool and stick to the routine so that’s what I’m trying to do,” Nye said.

“The last few days have been a big learning experience and very humbling actually … I’m just trying to enjoy it all, take it all in and learn as much as I can.”

While relatively recent to the training ranks, greyhound racing is nothing new to Nye, hailing from a family steeped in greyhound tradition from the town of Barooga.

“I found a photo the other day from back in 1991 with my grandmother Norma Gost and brothers Glenn and Scott,” reflected Nye. 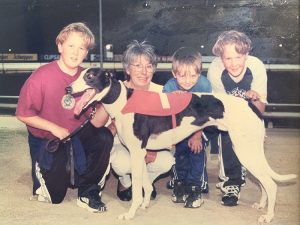 “I’ve been around greyhounds most of my life but decided six or seven months ago that the time was right to give training a go myself. I am an air conditioner mechanic by trade and up until recently was still doing a few days a week, but I am training full-time now.

“To start off with I had a couple of tier three dogs and it took me four months to get my first winner so I’m definitely not getting carried away with things now.

“I train out of Matthew Nash’s property and when Matt decided to step away from training a while back he suggested to Last Hurrah’s owner John Maple that he let me have a go with him.

“Matt told John that I was young and keen and willing to learn and listen and luckily enough John agreed and let me train him (Last Hurrah). I can’t thank Matthew or John enough for the opportunity.”

The underrated Last Hurrah goes into Saturday night’s Group 1 TAB Australian Cup Final as one of the outsiders, currently $21 from box four with TAB to claim the $300,000 first prize.

Winner at 18 of his 44 starts with a further 12 placings, Last Hurrah powered home to land his Australian Cup heat in 29.90 with an unimpeded passage, a run in transit Nye is hoping for again in this weekend’s blockbuster finale.

“I know I’m probably biased but he’s definitely gone through his career a bit underrated … he’s been unlucky in some big races,” Nye said.

“He doesn’t have a lot of early speed so he will need luck in the run. To be a chance we’ll need the same sort of run as he got in the heats, and we are probably hoping for a bit of trouble up front as well.

“But being honest Whiskey Riot looks a class above. Had he drawn box one or two it would have been game, set and match. Box eight for him does open it up a bit but he’s still the one to beat. He’s a great dog and to even finish second to him would be a huge thrill.”

With six dogs in his care, four racing and another two pre-training, a modest Nye admits that he’s just beginning to consider himself a fully fledged greyhound trainer.

“I’m forever asking questions and doing research on the computer – to be honest I still don’t consider myself a trainer,” said a humble Nye.

“Jamie Ennis has been a great help to me. He’s given me plenty of advice and Matthew (Nash) has been fantastic as well, I can’t thank him enough.

“Being new to training I take in every bit of advice I get and try and follow what the successful trainers are doing with training and programming. I don’t think you ever stop learning.”

Fully aware that nights like this don’t come along very often, Nye has every intention of soaking up every bit of Saturday night’s Australian Cup Final and the spotlight that comes with it.

“Even being a part of Monday’s box draw lunch in town was a new experience – you are sitting there with trainer’s like Anthony Azzopardi who you aspire to be like,” Nye added.

“But it’s all been great. I’ve had a few people ask me to take a dog or two since the weekend but I don’t have any room at the moment.

“I’ve got about 30 family and friends coming on Saturday and whatever the result we’ll enjoy the night.”

And most importantly, Nye has declared the son of Where’s Pedro spot on for his group 1 assignment.

“I’ve had him checked and he’s 100 percent – I’ll have him checked over again Friday,” Nye added.

“I had a few people giving me a bit of stick for racing the dog at Horsham the Tuesday before the Cup heats but I know the dog inside out and I guess the result on Saturday proved I made the right decision.”

“I bought him and his brother off Ruth Matic in NSW at three months of age off the photos of them on the internet,” Nye reflected.

“I trialled Barooga Smoke early on at Ballarat over the shorts and he went 22.11 on a Saturday morning and I thought to myself I had something pretty handy.

“I bought a Launching Pad ticket for him on Sunday night which has been the aim for a while.

“He has a bit against him on Thursday night but if he repeats Sunday’s run he should win. But whatever the result I’ll head towards the Launching Pad with him.”