OPAWA Superstar is a superstar by name, ability and nature as witnessed by the emphatic victory he secured in Sunday’s $80,000 Auckland Cup final. 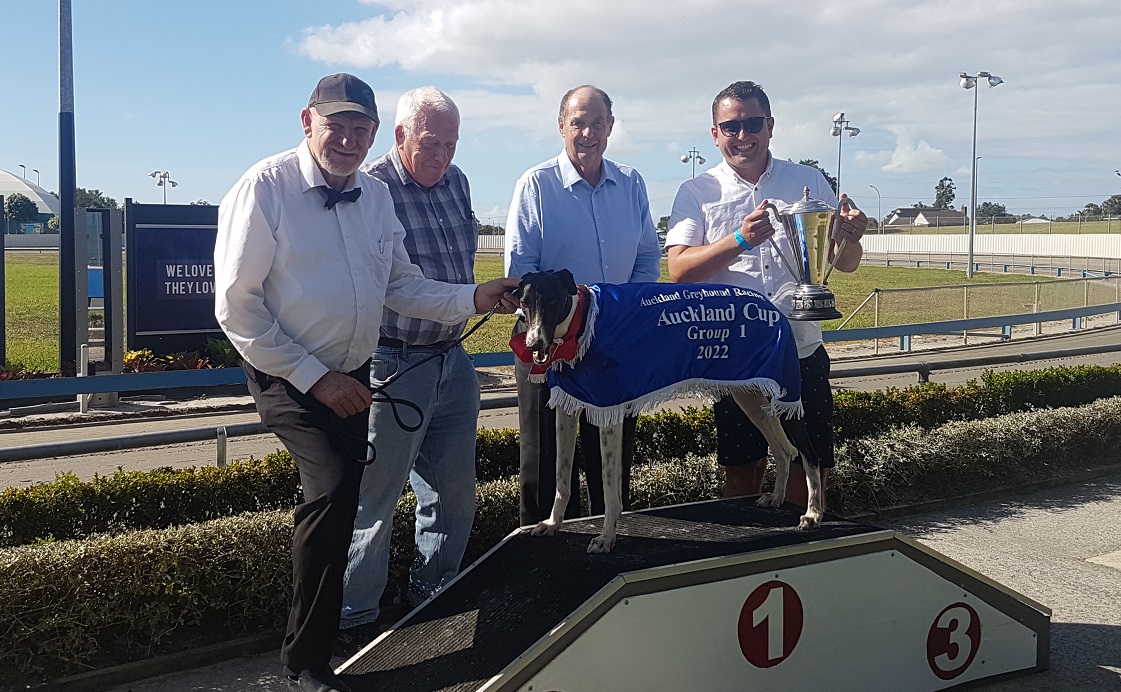 OPAWA Superstar is a superstar by name, ability and nature as witnessed by the emphatic victory he secured in Sunday’s $80,000 Auckland Cup final.

The Group 1 527m event was all over as a contest when the field rounded the Manukau first turn.

From that point the Dave and Jean Fahey prepared son of Fernando Bale and Opawa Tab was in a free-wheeling mode, clearing out for his effortless victory by a four-length margin, completing the 527m trip in 30.30.

It was left to his kennel mate Opawa Wayne to lead the forlorn chase after the warm $1.80 race favourite and he comfortably claimed the runner’s prize, holding a 3.25 length advantage over the Craig Roberts trained Talbingo Bale.

“When Superstar jumped onto pace, I was confident he wasn’t going to get caught as he’s a very strong dog.

“That was the best Wayne has jumped – he is rapidly improving,” stated Dave Fahey who advised the next major target for the pair will be the New Zealand Derby at Cambridge (April 14).

It’s was the Fahey’s fourth Auckland Cup training success, while they have now mentored two of them for the Opawa Racing team, comprising of Robin Wales, Graham Campbell and the late Ron Todd. In this instance they have included a mate Alan Davidson in the ownership.

The result was yet another outstanding breeding success for Opawa Racing with Wales saying, “Superstar is the best dog we have bred – I knew that right from the time he was broken in.

“We have bred a second litter from Opawa Tab (by Winsome Opawa) and hopefully there are some in that litter who also turn out to be handy greyhounds.”

Opawa Superstar is building an outstanding winning strike-rate, having now won 19 of his 25 race day assignments (five placings) with his stakes total now sitting at $130,229.

Short course sprinting is all about mistake/interference free racing.

Illustrating that was Golden Fern who seized on a dream drag into the $30,000 Railway Sprint when charging into the turn to master the pacemaker, slipping clear to annex the Group 1 318m dash final, clocking 18.45.

As trainer and part owner Thayne Green said about his upset $27 winner, “That was an unexpected win – going into the race I was thinking third or fourth would be best.

“Then, when he was handy to then pace going into the top turn I started thing, ‘hang on he can win this’ as he’s a very strong dog,” reflected the GRNZ Hall of Fame member.

He hasn’t been in the best of health lately and the 80 year-old leaves the daily conditioning work to brothers Mark and John Smith, along with Danielle Elder.

“I fire out the instructions,” Green added who is the Manukau tracks’ back-up lure driver which prompted him to chuckle, “I should apply to the Guinness Book of Records to be recognized as the world’s oldest greyhound lure driver!”

It was a Fernando Bale sired quinella with the Lisa Cole prepared Big Time Prada pressing on stoutly for her length and half second.