PETER Lagogiane has produced a training masterclass to guide Pay Call to a mesmerising victory in the Ladies Bracelet at Wentworth Park on Saturday night. 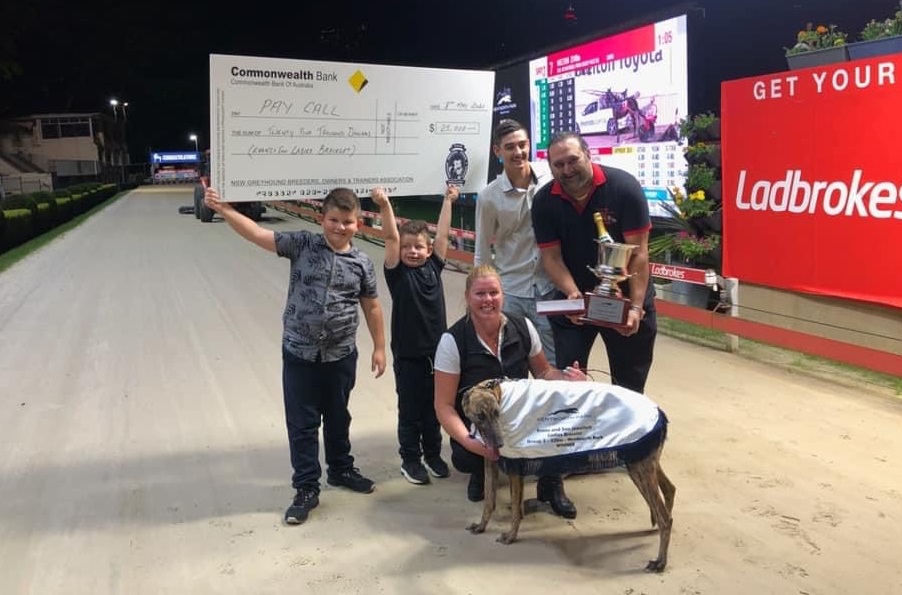 Heading into the Group 3 decider as the veteran of just 17 starts, Pay Call made a one act affair of the bitches blockbuster, storming to the front in a slick 5.34 before going home to score in a flying 29.44.

And in doing so the daughter of Moreira became the fourth fastest bitch to ever grace Wentworth Park with just Punch One Out, Zipping Willow and Cawbourne Whip having recorded faster times at the famous Glebe circuit.

Finishing a gallant second 1 ¼ lengths away was Vicki’s Queen, handing Lagogiane the quinella in the $25,000-to-the-winner feature, while Second Exit filled third another 3 ¼ lengths astern.

And while the well-bred chaser has called Llandilo home for six months she’s had just the six race appearances, winning four of them, including now three on end at Wentworth Park.

“She came on season not long after we got her so it’s been a work in progress to get her to where she is tonight,” Lagogiane said after the race.

“I’d be lying if I said she hasn’t tested my patience on more than the one occasion as she’s a bit of a nightmare at home but lately she’s become a lot better and we’re seeing that on the track in her racing.

“Earlier in the year I was aiming her towards the National Futurity but just wasn’t happy with where she was at so I basically stopped and started all over again with her which has really brought her on.

“I couldn’t be prouder of both bitches and how they went tonight.

“It’s a fantastic result for the kennel against what was a very good field of bitches.”

A fortnight ago, Lagogiane shipped two-time Group 1 finalist Vicki’s Queen to Melbourne to trial at Sandown Park in preparation for this Thursday’s heats of the Group 1 Sapphire Crown (515m).

And while Vicki’s Queen’s sojourn south is all but assured, it’s plausible she’ll now have a travelling companion in Pay Call for the $100,000-to-the-winner bitches series.