MICK Zammit "blew up" after he spent most of the night at Albion Park on Thursday sitting with mate Adam McIntosh and never once did Adam tip to him.

GROUP 1 trainer Mick Zammit “blew up” after he spent most of the night at Albion Park on Thursday sitting with his mate Adam McIntosh and never once did Adam tip to him.

Come race seven, a heat of the Listed Rising Stars (520m), and Adam’s bitch Pixie My Love led throughout to win at 100-1!

The daughter of Dyna Villa and Cincinnati Juice pinged the lids, led throughout and held off 60-1 chance Fernando Grand to win by half-a-length in 30.11.

Group 3 Townsville Cup winner Dulceria was third another half length away.

“Gee, I copped some ribbing after that,” joked Adam.

“I was walking down to the kennels to get her out for the race and spotted 60-1 on the tote, so I tossed a few bucks on her.

“But a bit earlier I had told Rusty Dillion to make sure he put her into his quaddie.”

Adam admits Pixie My Love’s win was a surprise.

“The stewards called me in to explain the form reversal, but I gave her a rough place chance from the good box draw,” said Adam.

“It was her first 500 metre race and she went into it off a box to box trial at Albion Park. She went only 5.77 to the first mark in that trial which was disappointing, but last night she pinged and ran a 5.50 first section. 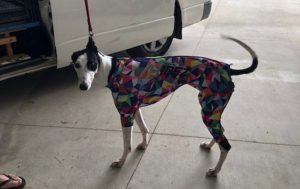 Pixie My Love has now won five of her 20 starts, been second in a Bundaberg Young Guns and a Capalaba Young Guns finalist.

But she went into the Rising Stars heat off a fifth at Capalaba on September 25.

“Yes, I had something on her. Not much but it was a pleasant surprise when she got out to 100-1,” said Adam.

“I was sitting all night with Mick Zammit and told him I fancied she had a place chance.”

A night earlier at Wentworth Park, Little Trucker scored for trainer David Power also at an SP of 100-1.