TRAINER Carly Feltham admits she couldn’t help but get the giggles when her young sprinter Kysaiah won his heat of the Geelong Cup last Friday. 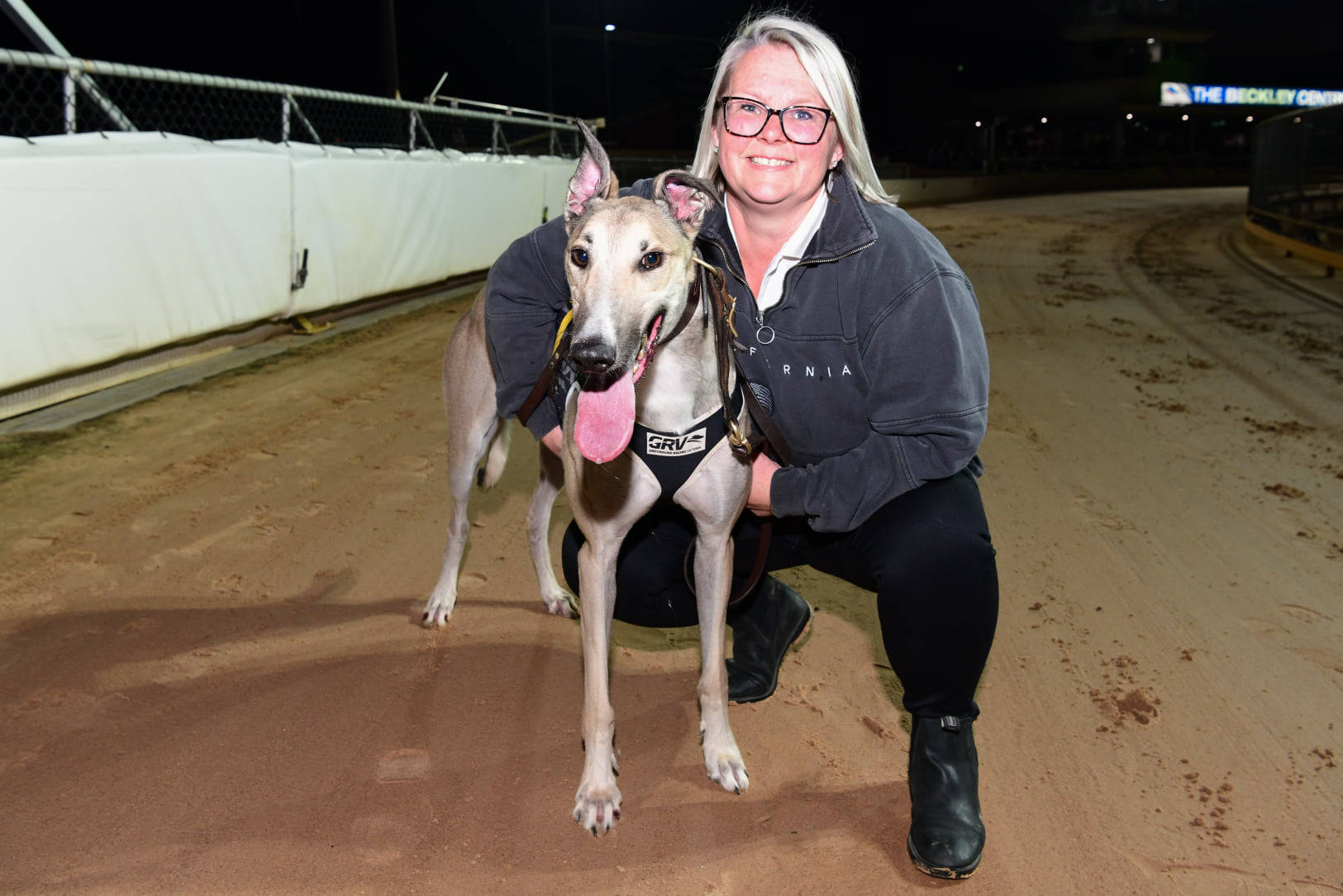 DEVON Meadows trainer Carly Feltham admits she couldn’t help but get the giggles when her young sprinter Kysaiah won his heat of the Geelong Cup last Friday.

Making his Geelong debut, Kysaiah jumped fairly before showing a tremendous turn of foot, powering around the field at the first turn and setting the time standard of 29.75 – just four lengths off the track record.

Despite entering the series in impeccable form including two recent sub-30 second wins at The Meadows and a 29.33 win at Sandown Park, Feltham admitted to experiencing pre-race nerves.

“Not before I kennelled him but just before I walked to the kennel block,” she said.

“I thought, ‘no, calm down if you’re nervous he’s going to feel that’.

“But when I saw him come pounding past and I knew that he’d won, I was stunned. I’m not often speechless but I actually got shivers thinking ‘Daisy’ has produced a group finalist!”

‘Daisy’, or Wharfie’s Girl, won 18 races for Feltham during her 80-race career.

Feltham selected Zambora Brockie for her first litter following the advice of breeding expert David Brasch and produced what she believes is the fastest dog she’s ever trained, a fact that was clear from his first trials.

“He went to the bullring three times and that’s all that took to break him in. We slipped him at Sandown and went 13.80 and the track guys said they’d be really happy with that. Next time he went 13.31.

“His first go at Warragul, just his seventh trial including breaking in, we went 22.53 and I rang (husband) Kane on the way out and went ‘oh my God!’

Kysaiah has won 13 of his 24 starts including nine of 15 starts over 500m. Despite his solid form, Feltham wasn’t sure about entering him the series without trial at the track.

A planned holiday meant she was unable to make the trip to Beckley Park ahead of the heat, but thankfully friends Mel and Sean Lithgow stepped in to help out.

“We try and help each other out, but they help out more than I help them out I feel,” said Feltham.

“When they sent me the trial ticket I wasn’t sure if that was good (he ran 30.09) so I messaged (Geelong committee member and local trainer) Jason Sharp and he said he’d be very happy with it, so I said ‘alright let’s have a crack’.”

Feltham, who juggles a racing team of three greyhounds between work and family commitments, is aiming for her first group race win on Friday night and the response to Kysaiah’s heat win suggests he’d be a very popular victor.

“I haven’t stopped smiling. Everyone has been really supportive. I think people genuinely like hearing about a small kennel where people bred a litter or two a year and getting something out of it, I think it gives people hope.

“The only thing I couldn’t do was rear him because we’re only on half an acre, but other than I’ve done everything else. You put your heart and soul into it really.

“It gives me a lot of satisfaction. There’s more satisfaction in picking the sire and watching everything progress from there, and the dogs have done it off the back of that first decision. I get excited by that part of it.”

Beyond Friday night’s $47,000 to the winner final, Feltham is targeting some of the biggest races in the country. The group 1 Harrison-Dawson at Sandown Park in May beckons, however the main aim is the Million Dollar Chase later in the year.

“The dream is the Million Dollar Chase, I’ll have a crack at that.”