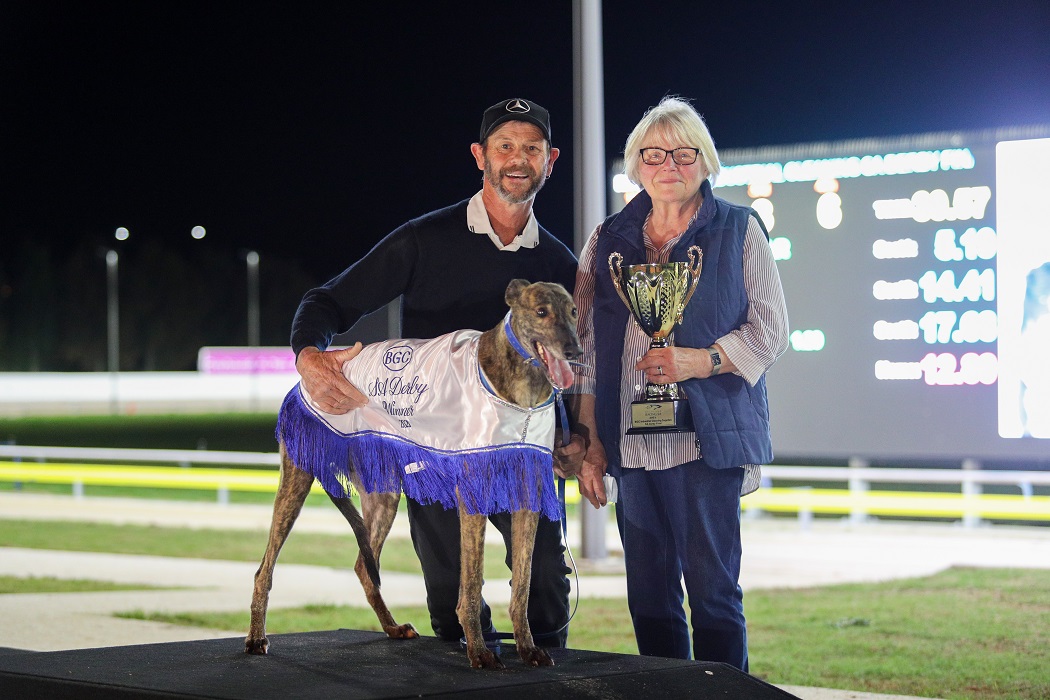 The son of Worm Burner and Bells Are Ringin wore down hot favourite Came And Went to win Thursday night’s Group 3 SA Derby in 30.57.

The winner came off the four box and started $21. It was his fourth win in six starts.

“Cameron and Yvonne gave him to us to train and have huge wraps on the dog,” Rasmussen said.

“He made the final of the Champion Puppy at Gawler early in August but cracked a shoulder and I had to scratch him from the final.

“So to get him into the Derby series has been a bit of a rush.

“Everything he does, he does at 100 percent so we worked him in the competition runs and gave him one trial. For him to win the Derby off that is pretty good. We are very happy with him.”

Rasmussen won his first Derby and it is one of only three SA features he had not landed, the other two the SA Oaks and the Adelaide Cup.

“It really was an enormous run by him to win the Derby,” Tony added. “While dogs like Aston Rupee are coming over for the Cup, Cameron and I will discuss if we go on to the heats.

“We all have a very big opinion of him. He’s got a big future.”

LAUREN Harris landed the Oaks final with Don’t Tell Lies for great friends Scotty Bryan and Cameron Betts and she too, like Derby winner Mallee Magic, came out of box four and started big odds of $19.

She led throughout to win by a length and a quarter in 30.56 beating Zinfandel Nikki.

“Scotty and Cameron sent her over after pre-training in Victoria and she has really settled into our training,” Harris said.

The daughter of Fernando Bale and Quest For Glory was having her 11th start and it was her fourth win. 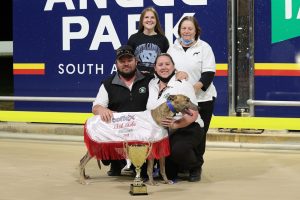 “She’s a bit one paced but really strong which is why we fancy her future over more distance,” Harris added.

“We gave her a great chance in the Oaks when she won at Murray Bridge late in August and broke 30 seconds.

“Her run home in the Oaks final was exceptional even though we are all still learning about times at the new track.”

Harris was high in her praise of the newly former Angle Park.

“The different lure run up is taking some dogs a while to work out especially when they are drawn out wide and can’t hear it coming,” she said.

“But the track is fantastic. Everyone loves it.”