Record Run Has Soda Spot On For Horsham Cup 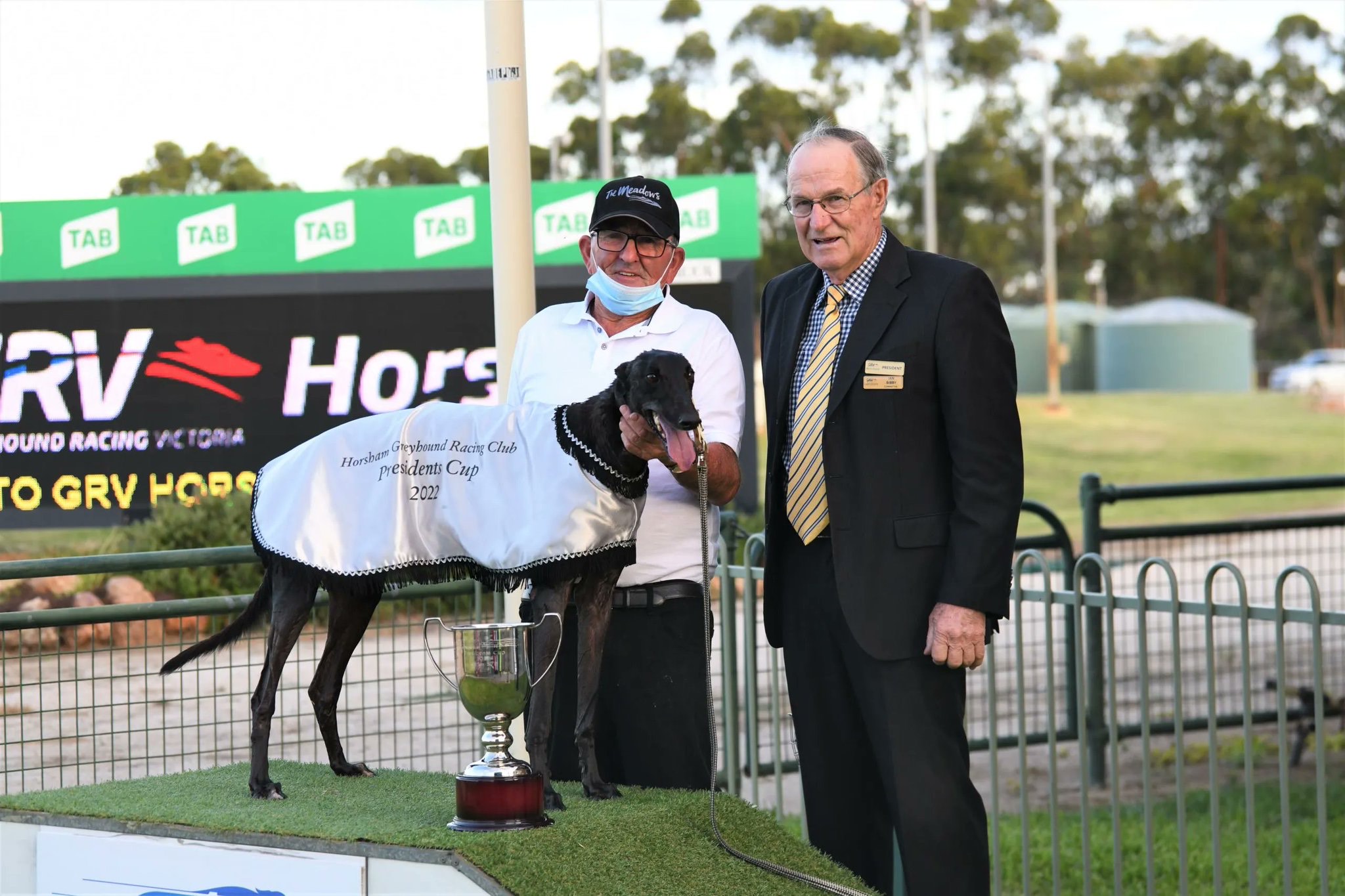 “He didn’t just break it – he broke it by two lengths,” a delighted Jimmy Auld said on Sunday.

“It was probably a bit of a surprise because a very good dog (Shima Shine) held the record but Soda Titan is an exceptionally fast dog when he gets on the bunny and that was the best I’ve seen him begin for quite a while.

“You shake your head at some of the times he runs in trials. He runs times only good dogs can run.

“He ran 27.03 first look at Horsham and never had one go that quick in all the years I’ve been going up there and Horsham is a track where they always go quicker second time too.

“He’s up there with anything I’ve had time-wise.

SODA TITAN (2) has run 26.662 seconds and broken the Horsham 485m track record in the #PresidentsCup final for trainer Max Auld.

“Hooksy was probably a faster race dog because he had sensational early speed – he’d break 5 seconds at Sandown – whereas Soda Titan only has fair early speed but on overall time Soda Titan would be quicker than Hooksy was.”

The Presidents Cup final shaped as a ‘clash of the Titans’, with fastest heat winner Aston Titan (Box 6), trained by Anthony Azzopardi, the $2.10 favourite ahead of Soda Titan (Box 2) at $3.20.

Auld was on very good terms with himself when Soda Titan was best to begin, holding out Aston Titan, and he was never looked like relinquishing the lead, scoring by 1.3 lengths, with Aston Titan (26.76sec) also breaking the previous record, while third-placed Aston Ulysses was only .01sec outside it.

“To be truthful, I thought if he came out he’d win,” said Auld.

“I gave him an enormous chance. I didn’t expect him to go that quick but I thought he would break ‘27’ easily enough.

“He came out equal with the green (Aston Titan) and that was the key.

“I’d like to take him to Bulli for the (G2) Gold Cup but the heats are next Sunday and I’d like to give him a trial.

“The Horsham Cup isn’t too far away (heats February 25), so we might just aim him at that. Horsham isn’t around the corner but it’s a lot closer than Bulli!

There was a thrilling finish to the other feature event at Horsham on Saturday, with Aston Flame ($2.10) edging out Zigzag Cabang ($2.20) in the $5000 to-the-winner Cardross Memorial.

A litter sister to Aston Rupee, Aston Flame, trained by Ian Garland, posted a flying 22.82sec to claim her 17th win from 27 starts and 10th from her last 11.

The Cardross Memorial is run annually in memory of six teenagers that tragically lost their lives when struck by a car in 2006, with Horsham regular Kerry Prowse the mother of two of the children that passed away.

It was fitting that Kerry Prowse trained the first winner at Saturday meeting, with Pullin’ Your Leg opening his career on a winning note.