ASTON Rupee's dam Aston Miley came on season Monday and Ray Borda will mate her back to KC And All for a repeat mating which produced "Rupee". 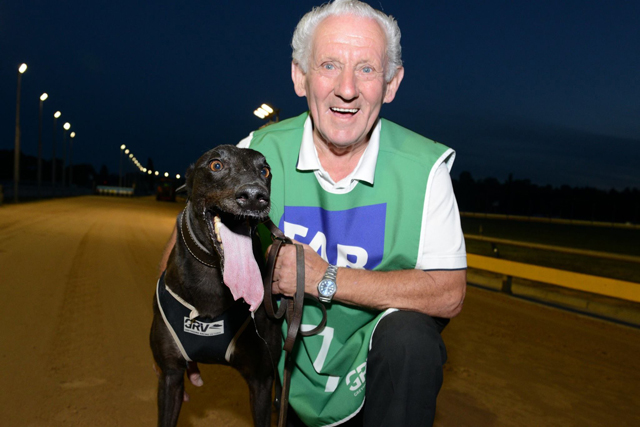 SUPERSTAR Aston Rupee’s mother Aston Miley came on season on Monday and owner Ray Borda will mate her back to KC And All for a repeat mating of the one which produced “Rupee”.

“I think I probably have the very last straw of semen available for KC And All,” Borda said. “Now that she is on season again, I will mate her back to him.

“It will be her last litter as well.”

Aston Miley (Barcia Bale-Aston  Elle) was a very good race bitch herself running third in a Group 2 Geelong Cup but also making the final of the Group 1 Melbourne Cup and Group 2 Warragul Cup.

She is, of course, a litter sister to Borda’s champion race dog and now star sire Aston Dee Bee, winner of the Group 1 Melbourne Cup.

“She is very, very healthy,” said Ray of Aston Miley.

“This will be her fifth litter. Her previous litter she produced five by Collision.”

Borda rates champions Temlee, Fernando Bale and Brett Lee as the best greyhounds he has seen race, but says Aston Miley’s son Aston Rupee is the fastest he has owned in 49 years in greyhound racing.

Borda loves nothing better than talking about his champion.

“To breed that sort of chase and determination is very fulfilling,” he said. “He is just so strong and focused.

“Aston Dee Bee and Aston Kimetto were great, great dogs but Rupee is the fastest I’ve had.

“And, there is not a day goes by without someone ringing me to want semen from him.”

None of the KC And All and Aston Miley repeat mating will be for sale.

Her progeny are so far responsible for 149 wins from 469 starts at the sensational strike-rate of 32 per cent.