FLYING Ricciardo has rubber-stamped his standing as a budding superstar of the sport with a race record victory in Friday's Group 2 Sires On Ice Black Top Final. 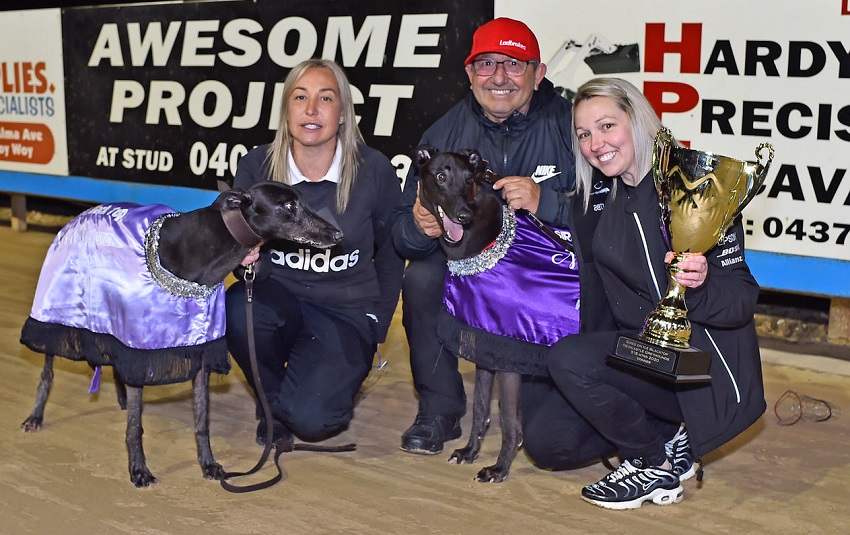 FLYING Ricciardo has rubber-stamped his standing as a budding superstar of the sport with a race record victory in Friday night’s Group 2 Sires On Ice Black Top Final (515m).

Going into the group 2 decider as the raging hot favourite following last week’s dazzling 29.17 heat romp, Flying Ricciardo was expected to make a procession of the $40,000 to-the-winner feature from his box two draw.

But giving away age and experience to each of his rivals, and facing by far the stiffest test of his 12 start career, the hugely exciting not yet two-year-old still had to go out and get the job done.

The night proved a memorable one for the star youngster’s trainer Kristy Sultana, guiding her charge to group 2 success at just start 12.

And it’s a night she can now share fondly with sister Michelle, trainer of gallant runner-up Left Unsaid, the despised outsider running the race of her career to fill second placing.

Having just the second 515 metre start of her career, Left Unsaid, a daughter of Sh Avatar, was beaten 2 1/2 lengths at the finish while Lightning Vision was another two lengths away in third for trainer Neil Staines.

As to the capabilities of Flying Ricciardo, the Richmond Gold Muzzle Auction graduate has the greyhound racing world firmly planted at his feet.

The son of Barcia Bale will now no doubt head towards the TAB Million Dollar Chase and given his continued ascension through the ranks, it’s hard to suggest he won’t be at the pointy end of the lucrative series come mid-October.

The good ones have a knack of making the difficult look easy, an attribute this prodigious talent has in spades. Every bit the complete package.

Meanwhile, earlier in Friday night’s program, ‘The Macca’ was won by Aston Zodiac in all-the-way fashion for Geoff and Leanne Grimwood in 29.34.

Making full use of her box one draw, Aston Zodiac staved off the late challenge from a courageous Knight’s Page which was shooting for back-to-back wins in the race for trainer Gayle Masterson.

On a night of fantastic racing, the Ladbrokes Red Dog Final (400m) was won by sprinting machine Blue Bronte, making it win 21 from 27 starts for trainer John Miles.