TRAINER Craig Roberts looks set to play a strong hand in what is a massive day of racing at Manukau this Sunday featuring the Auckland Cup. 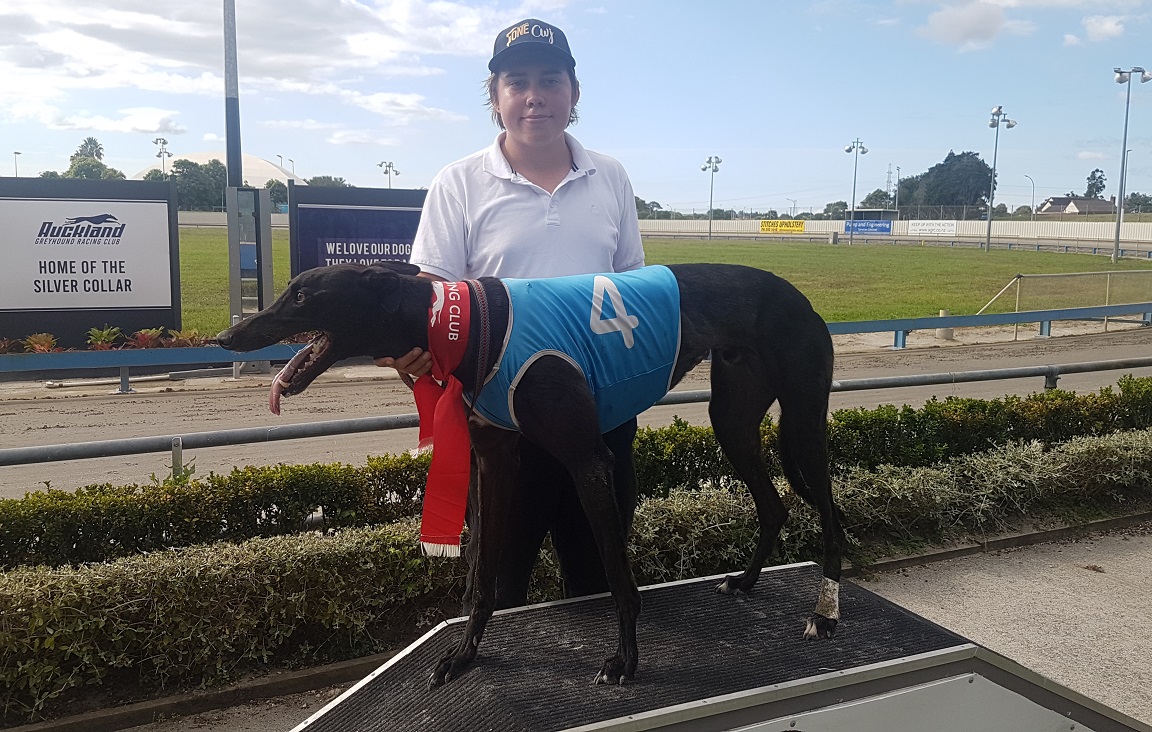 “Last Sunday was a great day – hopefully that success transpires into this Sunday,” commented Craig Roberts about the three finalists he lines up in Sunday’s $80,000 Auckland Cup.

The Manukau venue has been a happy hunting ground for the Canterbury mentor in the past as evidenced by the four Auckland Cups he has previously successfully annexed.

Roberts trained finalists bookend the 527m traps with Bahati Bale securing the ace-trap, while out on the other end is where Raja Bale (30.13 heat win) will emerge from, while the quickest heat winner Talbingo Bale (30.05) (pictured) will be loaded away into the tricky five-trap.

However Roberts is lamenting the draw allocation, saying, “Raja really wants the rail, while Talbingo can’t afford to make any mistakes from his crappy draw.

“Don’t get me wrong, because if Talbingo can push up handy to the early pace, then yes he has to be a serious winning chance,” Roberts offered.

“Bahati could be the forgotten dog. She is capable of effectively using her draw and she can make it an interesting race if she lands straight onto the pace.

“All three of them pulled up great from their heat efforts and they have pleased me during the week,’ added Roberts about his trio of Brendan Wheeler owned chasers, which all were making their track debuts in their respective heats.

It is fellow Canterbury conditioners Dave and Jean Fahey who has the firepower in this event to potentially deny Roberts another Group 1 victory, while seeking their 55th victor at the very elite level of racing.

The Faheys are chasing after their fourth Auckland Cup victory and the talented Opawa Superstar (30.16 heat win) certainly has the paw-power to deliver for them.

“Superstar’s draw (three) should work out all right for him. I would like to see him holding out Talbingo Bale going into the first turn,” advised Dave Fahey.

“He’s getting better jumping and he pushes up early good.”

Opawa Wayne (30.43 heat win) is a backup contender for the Fahey’s. “He isn’t the quickest away, although he does have excellent second phase acceleration.”

“Both of them travelled good and we expect further improvement from them on Sunday,” added Fahey.

The potent Garry Cleeve prepared stayer Know Keeper is likely to be sighted lurking within the pack during the early rush prior to powerfully rounding off his race.

Thrilling Risk was sighted finishing strongly along the rail in his heat however drawing out in seven means that his trainer Karen Walsh will be hoping for early racing luck.

Explosive is an apt description for the sharp field of short course sprinters who will dash over 318m seeking Group 1 glory in the $30,000 Railway Sprint final.

He presents Canterbury conditioner Tony Hart with a sound opportunity of being able to secure his first Group 1 training success.

To do so, his charge must clear his inside rivals after exiting from trap-seven. If he does taste victory he will join his mother Rosa Tee as a Railway winner after she stylishly won the 2018 Railway Sprint for the late, great mentor Ray Adcock.

Also looking to emulate a son – mother victory is the Tracey and Lisa Craik prepared Wheels On Fire. Mum, Just One Smile prevailed in the 2019 Railway final when prepared by their dad Ben.

He is appropriately named as seen by his tremendous Manukau 318m record, including his tidy 18.25 heat win.

The huge winner in the box-draw allocation was the Lisa Cole prepared Big Time Prada who will wear the red racing vest.

She has a noted scouter drawn on her immediate outer, suggesting that using her known sharp early pace can see her providing the powerful Cole kennel with their third Railway Sprint title.

It is a superb undercard for Sunday’s Manukau racing, including the $15,000 Auckland Stayers Cup over the extreme 779m race distance.