ICONIC Warrnambool breeder Noel Mugavin was in Noosa on a short holiday break but was still glued to Sunday's Sandown race meeting. 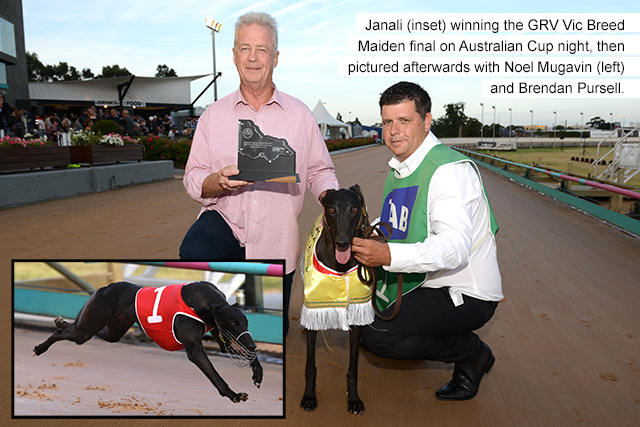 WARRNAMBOOL breeder Noel Mugavin was in Noosa on a short holiday break but was still glued to Sunday’s Sandown race meeting.

The first of the progeny of his former Group 1 galloper Benali (Barcia Bale-Born Ali) were due to race in four heats of a maiden series over 515 metres.

By the end of the fourth heat, Noel was a satisfied man. Three of those littermates had won in impressive style, the other was a storming third.

Benali ran 29.29 at Wentworth Park to be the fastest son of Barcia Bale at the track until Flying Ricciardo came along.

He also twice won a Perth Cup Consolation and was a finalist at Group 1 level in the Sandown Cup, Albion Park Gold Cup and Rookie Rebel.

Nine of her progeny have been Group class.

“Benali was a very honest race dog, possessed of great speed, stamina to make Group 1 finals and I knew he deserved his chance at stud,” said Noel.

The first breeder to use Benali was his former trainer Robbie Britton who put Erelda Bale, a litter sister to champion Fanta Bale, to Benali.

Robbie has been so impressed with the four Benali pups his son Tim is training he has since mated another bitch to him.

On Sunday at Sandown Park, Robbie, a non punter, backed his judgement by labelling Quick Smart a good thing in the opening heat and he promptly won in 29.57.

Next up, Noel’s Francis Benali led throughout in 29.66 and he comes with huge wraps from the Britton kennel.

Wheel And Go was in the third heat and he ran on powerfully to finished third to heavily backed High Tribe Rico in 29.75.

The Brittons have high hopes for him at a distance in the future.

Come the fourth heat and Cash It In ran 29.64 to win in style again leading throughout.

It was a big day for Born Ali whose son Capra then won a 595m graded race later in the day.

This followed the sensational win by her son McInerney (Fernando Bale-Born Ali) in 29.24 at Sandown last Thursday night beating such stars as Equalizer and Titan Blazer.

“Yes, we still have a number of straws available for Benali who unfortunately died recently,” said Mugavin.

“What a great start to his stud career, four starters, three winners and a third.”

The Brittons are very bullish about Francis Benali.

“And, Robbie admits to having had a nice bet on Quick Smart who has always shown great ability.”

“It goes to prove that dogs with ability like Benali, giving their opportunity at stud, can achieve,” said Noel Mugavin.

Benali’s next litter is from Loud Lana and was whelped in January this year.

Robbie Britton has since mated US import Biodiesel to Benali, a litter not due until June.