THE Sharp family look to continue their rich run of form at Sandown on Thursday and Jason Sharp believes an $8.50 pop is their best chance. 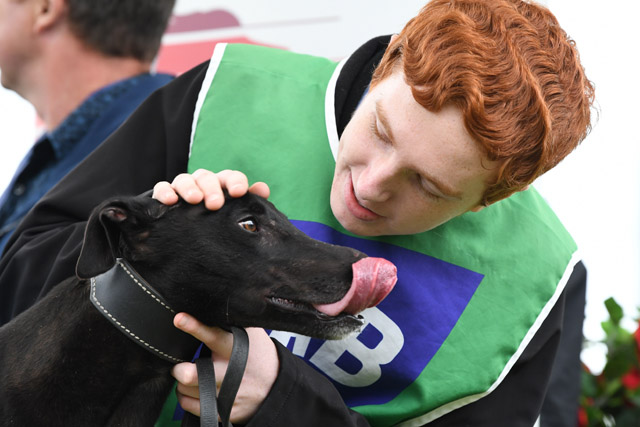 THE Sharp family is looking to continue their rich run of form at Sandown Park on Thursday night, and family patriarch Jason Sharp believes an $8.50 pop is their best chance on the card.

Husband and wife Jason and Jessica Sharp have long been prominent at metropolitan meetings and enjoyed one of their most successful nights two weeks ago when running second and third in the group 1 Sapphire Crown, as well as winning the rich VicBred maiden final on the same card.

But it was the following week that the Sharps enjoyed one of their proudest moments when 19 year old son Dylan trained his first city winner.

Does it get any better than this?

So great to have nearly all of Team Sharp on track last night to celebrate our girls doing so well. A night we’ll never forget @sandowndogs 🎉 pic.twitter.com/bXlxe21MQt

“It was really good for Dylan. He does a great job, he works for us full time now and he tries to tell me how to train dogs, but we’ll get there,” said Jason, laughing.

The family combines with six runners on Thursday night including the favourite of three races.

“She was pretty good last week, she just had the wrong dog on lob her back. If it was a fast track, she would have won easy but it was a slow track and it pulled her up a bit. She’s always shown ability, but when we first started her she just a ‘deer in the headlights’ sort of thing.

“I think she should go pretty well again. She’s coming out well, there’s a little bit of speed on her inside but I don’t know strong they are.”

“I think she’s potentially going to be a nice little stayer so I think she’ll go pretty good in that race. I like her down near the fence. It’s her first look at Sandown, but there’s a lot of dogs missing at the moment because of the Pink Diamond series so we thought instead of trialling we’ll put her around.”

Earlier this month, Dylan Sharp was the handler for ASTRO BOY in the Group 2 #WarrnamboolCup Final.

“It’s bit of a hit and hope. She’s a bit one paced so we thought we’d step her up and see if she’ll run it, or maybe get on the lure and keep on running. It’s just a test to see how she goes.

It just depends on how the track is playing. They’ve both got speed, if it’s a bit quicker Let’s Win Coin but if it’s a little heavy, it brings Aston Lavinia into it. I’m leaning towards Let’s Win Coin, but it does depend on the track.

I think he’s a big, big chance – he’s probably the best bet of all of our chances. He’s going really good that dog.