IT takes an outstanding race dog to get Andy Lord excited and that's exactly the case with boom youngster, Temora Cup finalist She's A Pearl. 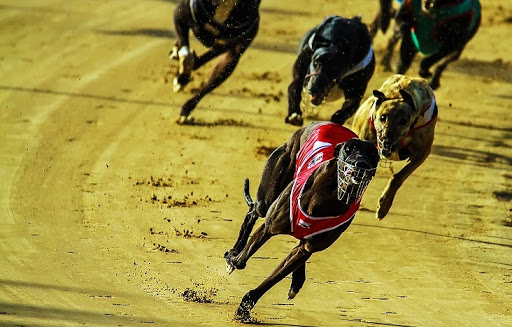 IT takes an outstanding race dog to get Andy Lord excited.

But that’s exactly what he is regarding She’s A Pearl, the daughter of Aston Dee Bee and Shez Impetuous which goes into Sunday night’s Temora Cup Final (457m) one of the hotpots.

The bitch has drawn ideally in box eight and is one of two finalists for Andy and Jodie Lord’s Gunning kennel. The other is former Tassie youngster Sacred Stance which has drawn in the four at only his second start for the new kennel.

Both finalists are raced by the Punters HQ Syndicate, although Andy said he had sold the racing rights of She’s A Pearl to the syndicate but has retained her for breeding.

She's A Pearl has bolted in at @Temoragreys in her heat of the @ladbrokescomau #TemoraCup in 25.74!

Castle Warrior won the opening heat in the fastest time – 25.70.

Who is your pick in the final next week? Watch both heats below.

“She will love the eight box, has great early pace and will be very hard to beat.”

Lord said She’s A Pearl reminded him so much of champion Fernando Bale with the sections she could run when winning in 29.50s around Wentworth Park.

“She’s got the early pace everyone craves for in a race dog.”

Her immediate target is the Group 1 Golden Easter Egg.

Kennelmate Sacred Stance has had only one start for the Lord kennel since arriving from Tasmania, when second in his Temora Cup heat.

“He is only just starting to settle in since coming here,” said Andy. “I’ve noticed it does take a while for dogs from Tassie to get settled.

“But he is really starting to turn the corner now.

“If he comes out he will be very hard to beat. For a young dog like him to make this final, it is a big deal.”

Sacred Stance has won eight of 11 starts and was second to Castle Warrior in his heat.

Lord believes Victorian star Ferdinand Boy is the one for them all to beat.

“I don’t think he trialled at Temora before his heat win and he was very professional in his win,” he said.

“That’s why he will be the hardest to beat.”

Sacred Stance could be aimed at either the Easter Egg or the Group 3 New Sensation during the Egg carnival.

“The New Sensation is a very good race for a young dog like him,” said Andy.