SUCCESSFUL owner/breeder David Gleeson is very rarely – if ever – short of a word, especially when it comes to his ‘Shima’ greyhounds. 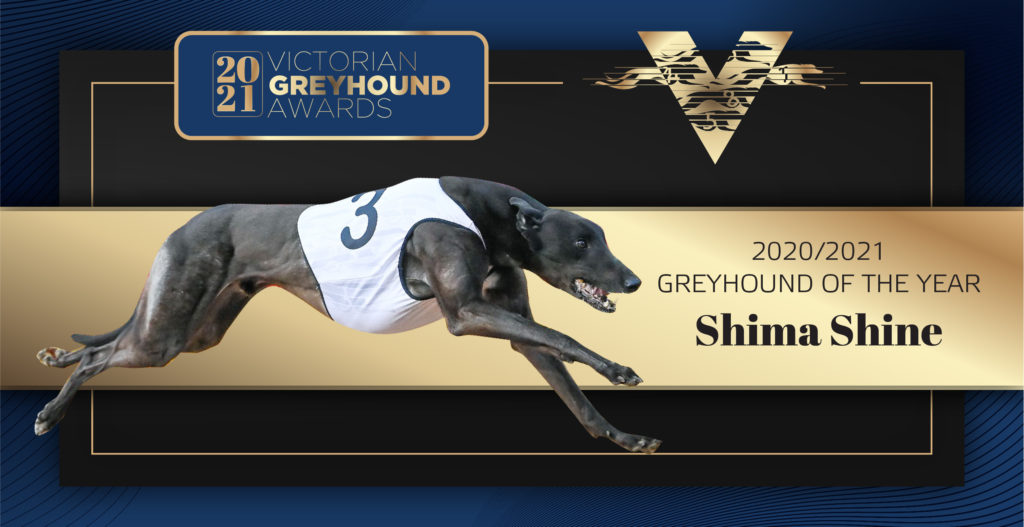 SUCCESSFUL owner/breeder David Gleeson is very rarely – if ever – short of a word, especially when it comes to his ‘Shima’ greyhounds.

But that was the case when an emotional Gleeson was informed his champion home-bred pride and joy Shima Shine was the recipient of the 2020/21 Victorian Greyhound of the Year award and Sprinter of the Year title.

“To tell you the truth, I’m quite speechless and I’m very emotional,” Gleeson said to GRV’s Molly Haines, wiping away tears.

“It’s beyond words. It’s a thrill beyond a thrill.

“To win something like this, not in my wildest dreams did I ever think he’d be in a position to get an award of this magnitude.

“It would be without a doubt the biggest thrill I’ve ever had in racing. Just sensational. I’m so pleased and humbled by it.”

It’s another special GOTY achievement for Gleeson, who was awarded the Ken Carr Medal in 2018/2019, in recognition of three decades of achievement as a breeder, owner, administrator and sponsor.

Being anointed both Greyhound and Sprinter of the Year is a magnificent achievement at any time, but even more so in 2020/21, considering the enormous depth amongst the Victorian ranks.

In a stellar crop, Shima Shine, which was trained by Andrea Dailly, vied for the spotlight with ill-fated superstar Simon Told Helen, Melbourne Cup hero Hard Style Rico and two-time G1 winner Tiggerlong Tonk, among others, giving the judging panel an unenviable task.

Shima Shine won 20 of his 36 starts over the 2020/21 period and was victorious in three of the 11 Group events he contested, the highlight coming with a career-defining G1 breakthrough against the best of the best in the Topgun invitational at The Meadows.

His other triumph at G1 level came in the Gold Bullion in Brisbane, where he left recently-crowned Australian GOTY Tommy Shelby in his wake, while he also won the G2 Horsham Cup, breaking the 485m track record in his heat.

“Well, I think the Topgun would have to rate really highly because of the quality of the field; it was a hand-picked field,” Gleeson said.

“He began quite nicely and was challenged seriously by Simon Told Helen, who had that incredible mid-race speed. But ‘Shine’ turned it on again and ‘Simon’ couldn’t get around him. He tried to get him again at the top of the straight but ‘Shine’ just strode away.

“That and the Gold Bullion up in Brisbane, where he put Tommy Shelby to sleep!”

Gleeson and co-owner/breeder Bob Cummings are especially proud of Shima Shine’s GOTY coronation, as the home-bred son of Barcia Bale and Shima Song, herself the winner of the G2 Geelong Cup and G2 McKenna Memorial, is the culmination of a breeding program that dates back more than half a century.

“Dam-lines are the most important thing in producing greyhounds of quality and speed,” Gleeson said.

“Bob Cummings and I bred Shima Shine’s mother, Shima Song, and prior to that we bred her mother, Shimaguni, and we had the mother of Shimaguni and so on and it goes way back to 1964. It just evolved from dam to dam.”

While Gleeson could never have predicted Shima Shine would scale the heights he has, both on and off the track, he knew from the outset he and Cummings had a special talent on their hands, recalling the day he first handed the youngster over to Andrea Dailly.

“Andrea asked me what his name was and I said ‘Group 1’ and Andrea laughed and said ‘Tell me another one!’” Gleeson said.

“As it turned out, they rang me about four weeks later and said they thought I was right!”

Shima Shine was retired in August, having won 37 of his 64 career starts and banking $738,268 in prizemoney, and although Gleeson is excited about the triple track record holder’s stud prospects, Gleeson gives the impression there may yet be another twist in the superstar’s racing ‘tale’.

But whatever the future holds for Shima Shine, there can be absolutely no doubt he’s given Gleeson the greatest memories of a wonderful greyhound racing life.

“I just love racing and I love the dogs, which is evident by how they make me feel.”