Smith "Humbled" By The Phoenix Selection

JACK Smith is quick to credit his daughter Melissa for Jungle Deuce prevailing in “The People’s Pup” competition which cemented a spot in The Phoenix.

JACK Smith is quick to credit his daughter Melissa for Jungle Deuce prevailing in “The People’s Pup” competition which cemented the dual group winner a spot in the inaugural The TAB Phoenix.

“She was all over it right from the get go,” Smith said.

“I just told her I’d do whatever she asked on the proviso that she steered the ship.

“And she did a great job right the way through; she called me at 6am this morning to say he’d won. When the phone started going off I thought it might be good news.”

On Monday morning, The Daily Telegraph exclusively announced that Jungle Deuce had saluted in a fierce voting battle over Bandit Ned.

🙌 The people have spoken! 🙌

🔥 Introducing… Jungle Deuce, who will represent GRNSW in the $1.145m #TABPhoenix next month at @TheMeadowsDogs! 🔥

It was revealed that less than one per cent separated the two at the close of voting on Saturday.

“I know we won so it’s easy to say but I think the promotion has been great for greyhound racing,” Smith said.

“To be voted on top is very humbling and don’t worry he’s a chance in the race as well, especially if he draws a box.

“He won’t have another start between now and The Phoenix. I’ll get him back down there for another trial at The Meadows at some stage.

“I must admit the race being three weeks away feels a little strange. Almost like we’ve won the heat and need to wait for the final.”

Last week Smith announced that if Jungle Deuce booked a Phoenix berth he’d shout happy hour on the night of the race at the Forbes Inn while also pledge $5,000 to charity. 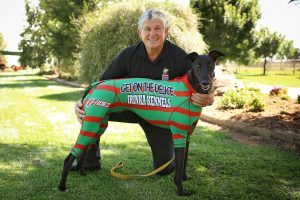 “We went to the Pub for lunch the other day and a bunch of tradies walked in so (wife) Maree went over and all but made them vote,” Smith said.

“I was walking around with my head down but the girls both got right into it the whole week.

“Even the women in the nursing home where Maree used to work voted for him. I said to Maree after we heard he’d won how great it would be if one of those ladies won the competition.

“It brought a tear to her eye just the possibility.”

On Monday afternoon the competition will be drawn to determine which person will cheer Jungle Deuce on in The Phoenix and be in line to win up to $50,000 in cash prizes.

“And if it was someone from Forbes it would be even better. The town really got behind him.”