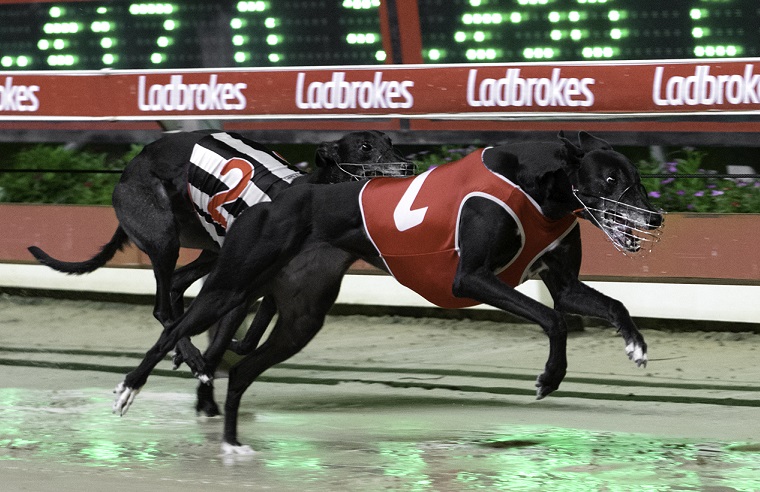 “I would have loved box one or two but next best would have been eight; I reckon the box draw has thrown the race wide open,” Crouch said.

SORRY SCOTT IS CURRENTLY $4.80 WITH BETEASY

After what has been a tumultuous few weeks at Dapto, racing again assumed the spotlight last Thursday, with four sensational heats of the $25,000 to-the-winner middle distance feature staged.

“We’d had this race on the radar for Sorry Scott for about four months, so when the news hit about the possible closing it was a big shock,” Crouch added.

“GRNSW have done a great job continuing racing there; I can’t remember a time in NSW when moral for the industry has been higher.”

Sorry Scott goes into Thursday night’s finale on the back of three successive middle distance wins, the most recent last week’s slashing 34.45 heat win, a whisker outside the 34.44 set by Victorian powerhouse Slingshot Hammer.

The remaining two heats were won by Rockstar Prince in 34.56 while Shez Got Soul recorded 34.69.

“I think our best chance of winning will be if Slingshot Hammer goes to the front and she gets out after him but as I said the box draw has really opened the race up,” Crouch added.

“Her run home times have always been very good.”

Sorry Scott, a daughter of Barcia Bale and Oya Nine Wonwon, is a winner at 10 of her 26 starts, with her electrifying recent middle distance form coming as little surprise to Crouch.

“And the best thing is the morning after a run you wouldn’t even know she’s been around. After Thursday we’ll try and pick off some 600s and then look to stepping her up to 700 and see how she handles it.

“She’s not the best traveler so if we head interstate we’d likely have to fly I’d say.”

The race is shaping up as a terrific betting proposition where a case can quite easily be made for each runner.