Spotted Elk has been crowned Queensland’s top dog after a stunning season that included 16 wins and second in the TAB The Phoenix. 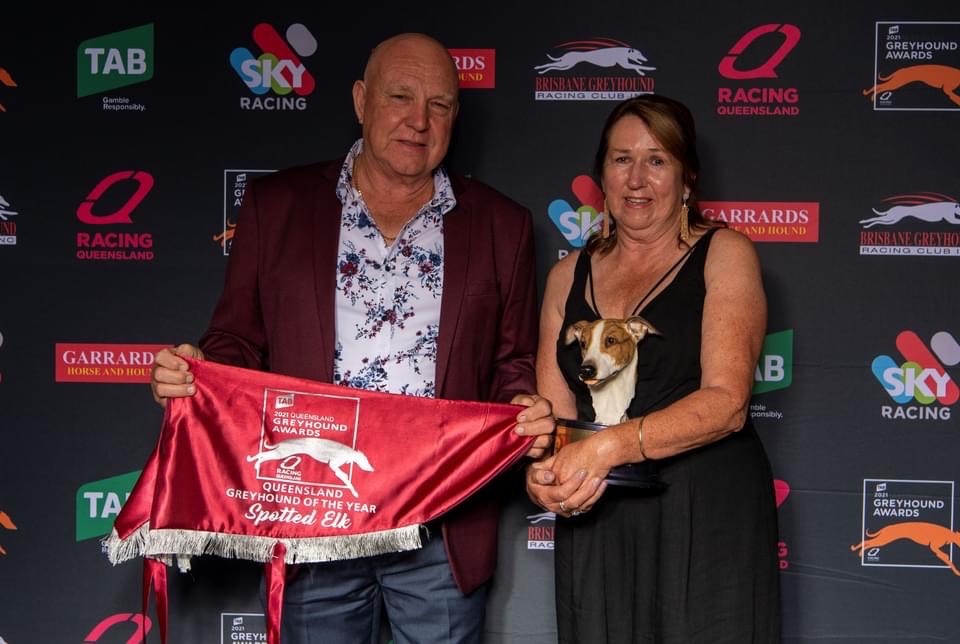 Spotted Elk has been crowned Queensland’s top dog after a stunning debut season that included 16 wins and second spot in the $1.145 million TAB The Phoenix.

Trained by husband and wife Graham and Leanne Hall out of Marburg, Spotted Elk was named the 2021 TAB Queensland Greyhound of the Year on Friday night.

She recorded 16 wins and 10 placings from 35 starts in a remarkable first year.

A standout was winning the inaugural Listed Queensland Flame which earned her a spot in the inaugural The Phoenix at The Meadows, a million-dollar race against Australia’s top chasers in Melbourne.

The Queenslander came close to causing a boilover, leading for a large portion of the feature race before being caught late to finish second.

“Spotted Elk’s feats both here in Queensland and on the national stage with her stunning run in The Phoenix make her a deserving winner of the TAB Greyhound of the Year Award,” Racing Minister Grace Grace said.

“The greyhound code continues to flourish, with wagering and participation figures at its strongest in recent years, and it is fantastic to be able to acknowledge the accomplishments of our industry this evening – both human and canine.

“The last 12 months have continued to present their challenges for the racing industry, and I wish to thank everyone for their hard work and commitment in ensuring the sport remains in such a strong position.”

Racing Queensland announced more than 20 award winners at the Gabba on Friday night.

Greyhound of the Year finalist Extra Malt, a litter sister to Spotted Elk, claimed the Run of the Year Award for her outstanding effort at Albion Park on October 28.

The Outstanding Contribution Award, which was introduced in 2019 to recognise the tireless

efforts of volunteers within the industry, was awarded to Neville and Norma Jackson,

who’ve both spent more than a decade as the backbone of the Rockhampton Greyhound Club in an era of unprecedented growth.

#TABPhoenix: Queenslander SPOTTED ELK (B3) set the early pace but it was the Jacqueline Greenough-trained WOW SHE’S FAST (B4), in just her 7th race start, defying her lack of experience to take out the $750,000 1st prize for slot holder SportsBet#GreyhoundRacing @TheMeadowsDogs pic.twitter.com/IWRH5tjICT

A rising star of the training ranks, Jedda Cutlack was awarded the Young Achiever Award for a season that amassed 27 winners at a 23 per cent strike rate.

Ipswich Greyhound Racing Club committee stalwart Di O’Donnell was presented with the Woman in Racing Award for her tireless work in the welfare space and her promotion of the sport through the annual Ipswich and Ekka Sweepstakes.