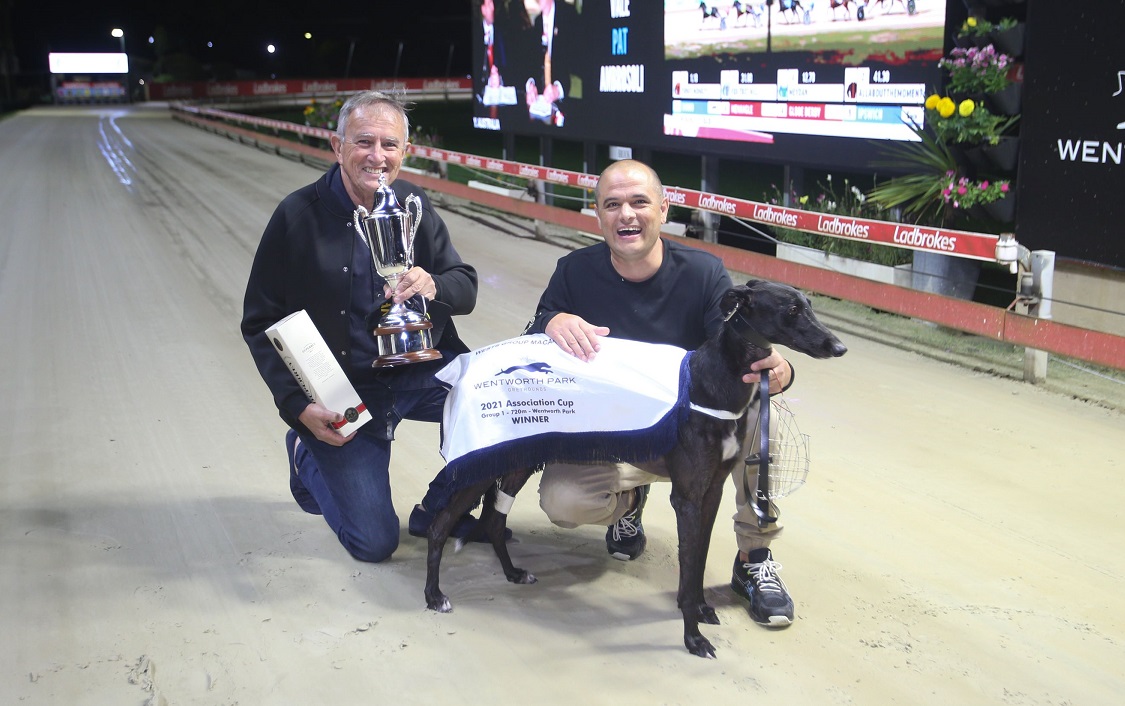 LONG-TIME owner Eddie Kingswell starts cancer treatment on Wednesday but that was the furthest thing from his mind when his grand young stayer Stanley Road came from an impossible position to win the Group 1 Association Cup (720m) at Wentworth Park on Saturday night.

Eddie gave full praise to trainer Mark Gatt for the Allen Deed-Piper Road dog’s victory, grabbing Victorian Fernando Cazz on the line to win by a head with a similar margin to Let’s See in third.

Stanley Road, already the winner of the Group 1 Super Stayers in Victoria, came from a clear second last in the early stages of the race and only a dream rails run on the home turn gave him sight of victory.

What a FINISH that was!

He rattled home to win and give Eddie Kingswell, 71, a dream result.

“I’ve been crook, pretty crook actually,” he admitted after the win.

“I’m not on any medication at the moment but I start treatment on Wednesday.”

Eddie has had the damline for some time and raced dam Piper Road.

“She had three starts for three wins but turned her head,” he said. “I told Mark she was not the sort of bitch I wanted to breed with.

“Andy Lord initially took her over but then gave her to someone else to breed with and I got a pup from the litter. This is him.”

Mark Gatt reared the pup, a giant of distance racing even though he is just 29 kilos, and gave him three initial starts.

“He didn’t do much but to Mark’s credit he said he would make a stayer and we decided to give him four months in the paddock,” said Eddie. “This is the dog you see today.

“He has not looked back since.”

Stanley Road will head straight back to Victoria for a series of distance races with eventually the Sandown Cup his target.

Eddie admitted these days he was not in greyhound racing for the money success brings.

He said he had made a great effort during the current circumstances to go when Stanley Road was racing and recently made the trip to Melbourne for the Super Stayers win.

“All credit must go to Mark Gatt for this,” he said.