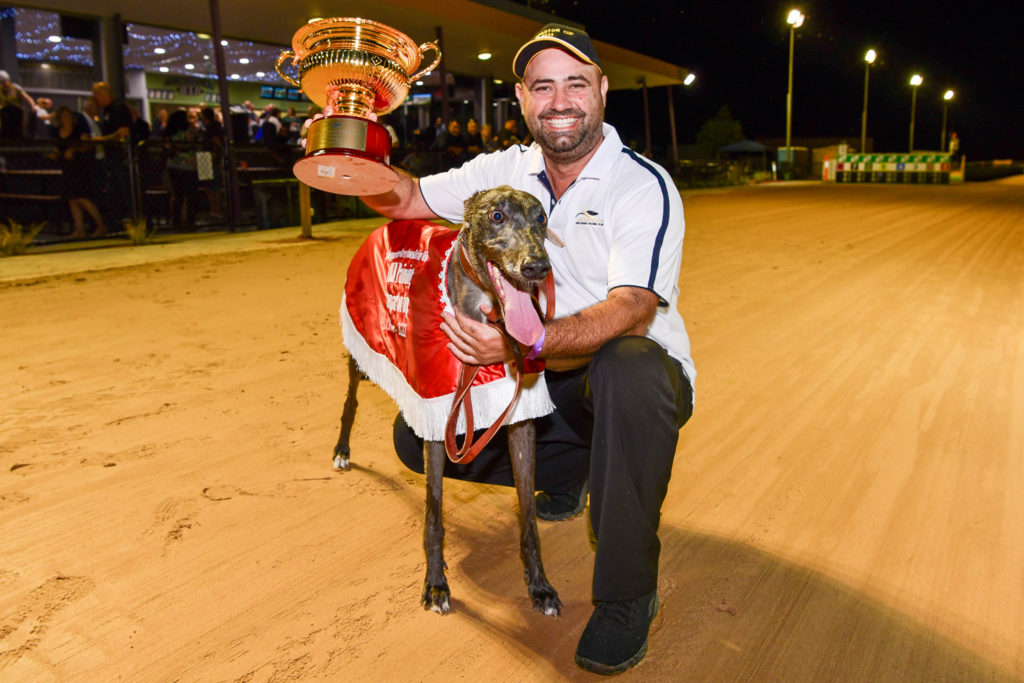 But Anthony Azzopardi and his regally bred outsider Substantial were reading from a different script.

While Substantial qualified for his first Group event with an upset heat win over superstar Bendigo Cup winner Paua Of Buddy, he was a $15 roughie from Box 7 in the $47,000 to-the-winner Cup final.

Idolize ($9.30) flew out to lead, with Mr. Audacious looming ominously in second; however, the rising star’s inexperience told when attempting to navigate a passage past Idolize and Substantial pounced, charging around the outside.

Azzopardi admitted he harboured serious concerns about the wide draw but said the near-record time was no surprise.

2022 #SheppartonCup: With IDOLIZE (B5) making the early running before blocking young superstar MR. AUDACIOUS (B6) for a rails run, $15 outsider SUBSTANTIAL (B7) made the most of his clear running to claim the $47,000 first prize in an electrifying 24.77sec. #GreyhoundRacing pic.twitter.com/98ny7bhpVJ

“I’ll be honest, Box 7 was a bit of a downer for us, but he’s always had the potential, as you can see with all his fast wins,” Azzopardi said to James Van de Maat.

“He’s been airborne, this dog. He’s been absolutely airborne.

“I said to Darren (Puleio, part-owner/breeder) the other day that I’m telling you, this dog can take the Cup out, as long as he draws inside. He didn’t draw the inside, but he still took it out!

“I did something a little bit different with him this week. I did a bit of box work with him. I thought he had to come out a lot better than last week and he hit the lids and I was quite pleased about that.

“I saw him on the outside and I thought these two (Idolize and Mr. Audacious) might get tangled up here and they did. They got tangled up and he got the fly, but that’s racing!”

Substantial is bred in the purple, being a son of super sire Barcia Bale and On The Runway, a litter sister to G1 winners Poke The Bear and Out Of Range.

“It’s more a thrill for me to win for Darren and Mick and the Puleio family,” Azzopardi said.

“They’re giving me some really nice dogs now and to win a Group race with them is very exciting.”

Substantial has now won 11 of his 29 starts, including four from six at Shepparton, with the Cup triumph boosting his earnings just shy of $100,000.

Azzopardi said Substantial will remain on a country cups path, with his next target the G2 Ballarat Cup next month.

Other feature race winners on Shepparton Cup night were: