PETER Sullivan knew when Pokie Payout came up with box one in the Ipswich Futurity decider (520m) on Saturday night it was her turn.

PETER Sullivan knew when Pokie Payout came up with box one in the Ipswich Futurity Final (520m) on Saturday night it was her turn.

“She’s been knocking on the door to win a feature race for quite a while now,” he said.

The Lightning Frank and Adelaide Bale bitch got up in the last stride to win the Futurity by a neck from early leader Spring Kono with almost three lengths to I’m Explosive in third. The winner ran 30.53 and started a $3.50 favourite.

She had been third in a Ipswich Young Guns and a finalist in the Winged Runner Trophy and Young Guns finals at both Albion Park and Ipswich prior to her Futurity victory.

“Yes, she only just got there, by a neck,” said trainer Peter Sullivan who prepares the bitch for a couple of mates headed by Jason Pashley. “But that’s all that matters.

“We are over the moon with her.”

Immediate plans are for her to go back to Albion Park for further 600m races.

The bitch has been racing over that distance for the past few months with success.

Sullivan reared the bitch who was bought as a pup by Pashley and mates.

“Right from the time we put her into work she showed something,” Sullivan said.

“She always tried so hard. We’ve always had a big opinion of her. She’s so strong.”

The one box suited her perfectly.

“She’s come out of the one five times and won four of them,” said Peter.

On the same program, Jedda Cutlack’s Showdown added Saturday night’s Ipswich Derby to his career highlights after having recently led throughout to win the Molly Campbell Silver Dollars final at Albion Park. 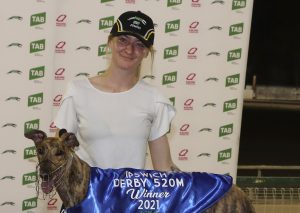