And so far, this Aussie start-up is delivering in spades.

Over $64,000 in payouts to 38 individual winners with some epic player vs player struggles along the way.

Swopstakes games are played on live racing and sport, starting with a pool that has one unique ticket for every possible combination of winners – so like a sweepstake, but over a number of races or footy matches.

As each event is run and won, each ticket that missed the winner gets knocked out. All tickets that have the winner survive to the next event and increase in value.

Each day an always growing community of players are doing battle to be the last left standing, holding the one ticket in the game that boasts the winning combination.

Prior to each event they can:

Swopstakes COO Craig Driver said: “the unique combination of in-game options means players can adopt a number of different strategies. It changes from game to game and we’ve had some fascinating tussles so far. Highly engaging.

“At Ipswich the other Friday we had player ‘MopLovin’ buy in for $842 with one race left to run. His ticket was only a 9% chance of winning the race but as the lone survivor he’d score the pool. That was until ‘Venomcartel’ did the maths and purchased a ticket just before jump, jagging the 20% favourite. MopLovin must have got a shock but didn’t sit still. Within seconds he’d paid $84 to swop his ticket, improving to now hold the 15% chance. In the end neither had the winner and they shared the pool, both picking up a profit. It was more exciting watching them play and strategize than it was watching the race!” 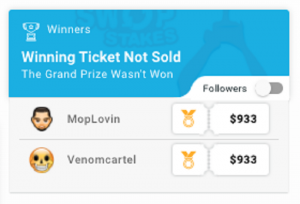 “Earlier this week we had another player, Kungfupanda, buy a ticket from the Bank for $10.90 in Race 6. The ticket had already been cashed out twice – and by the same player. It was a canny pick-up by the Panda, as the ticket went on to win the game and pay $522. Not so canny by BloodGuard, but even they managed a small profit.”

“Our website makes all of this visible in real time. Everybody can see who’s alive, what they have on their tickets, and how they got the ticket. The results are determined by real races so knowing the form definitely helps but there’s a real player v player element as well.”

“We think it’s a lot like Texas Hold’Em. You can win by being lucky, but the smarter players can certainly work an advantage.”

“Swopstakes has games every day on racing and sport. The jackpot games, on Thursday night dogs at Dapto and the Victorian gallops meeting on Saturday, will keep going up to $50,000 until we have a winner. The tickets are just $0.25 each, so a pretty good option if you’re after some fun and the chance of a big payday.”

Swopstakes also runs free play racing games every day. Driver said “it’s a way for people to try before they buy, and to test out their game style. It also gets some new people watching racing, which is critical to the future of the industry.”