TRAINER Ash Terry arrived at Sandown Park last Thursday with one runner in the Launching Pad heats and came home with two in the semi-final. 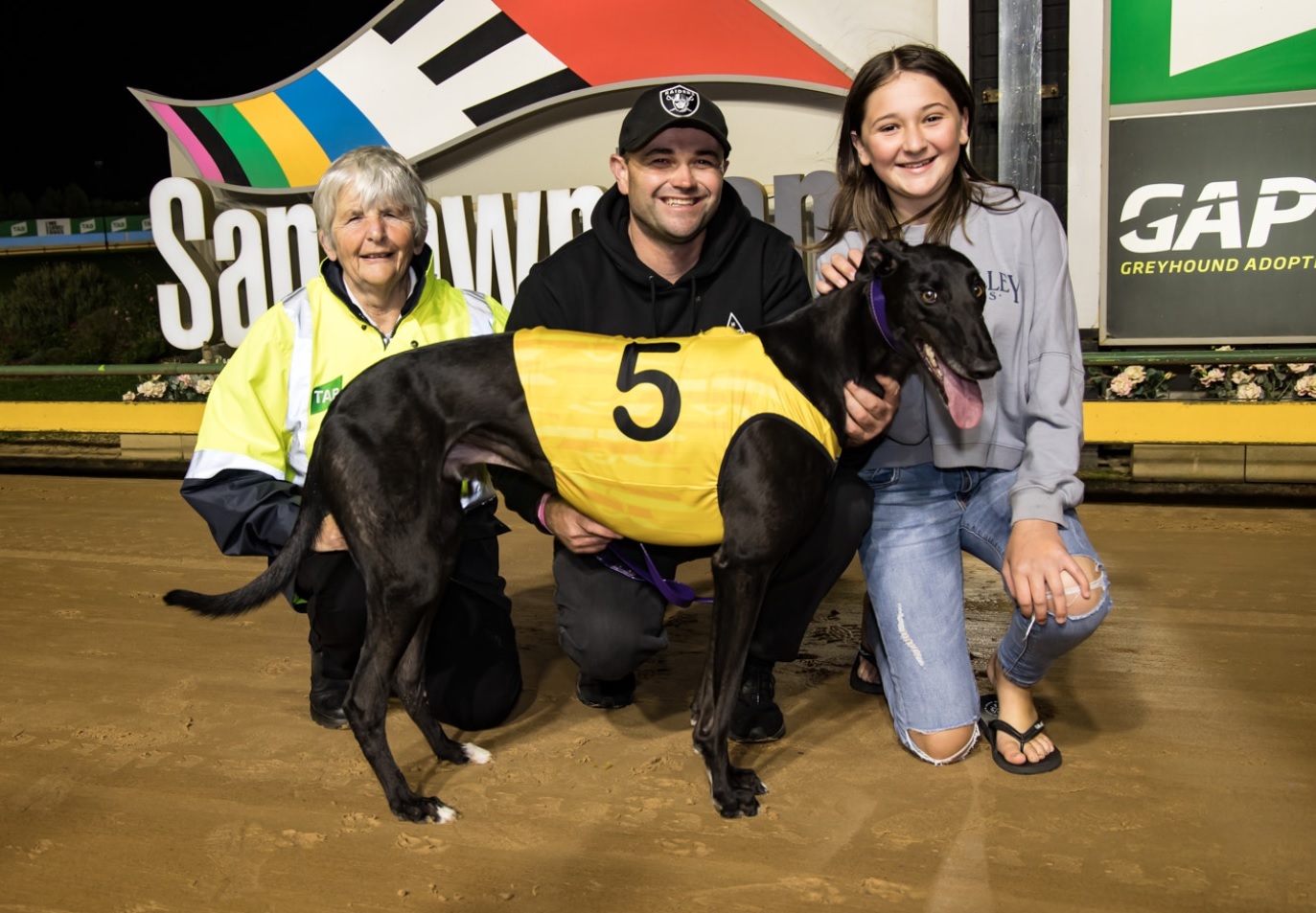 TRAINER Ash Terry arrived at Sandown Park last Thursday with one runner in the Launching Pad heats and came home with two in the semi-finals.

Terry’s young prospect Fearless Rory ran third to series favourite Wow She’s Fast in the second heat of the night to secure his ticket to the semi-finals, but it was her mother’s greyhound Amlin Emperor that caught the eye two races later and completes Terry’s two-pronged assault on Thursday night.

“Mum (Pearl Terry) and Gerrie (Sneyders) asked us on the weekend prior if we were interested in taking him on,” said Terry.

“They’re looking to cut back on the dogs and go travelling but we suggested they race him through the series.

“But they rang on the Monday after nominations had closed and asked that win, lose or draw, we take him home with us. Nathan ended up handling him and we took him home after the heat.”

While new to the kennel, Terry is very familiar with her new acquisition.

Amlin Emperor was bred by Sneyders and Terry was involved with him through breaking in and pre-training, his ability obvious at an early age.

Terry said that Amlin Emperor was the subject of a number of decent offers for the dog, but Pearl and Gerrie were adamant that he’s not for sale and already has a home once he’s finished his racing career.

“He’s always been a really good chaser and does a lot of things right so it’s really exciting to get him in the kennel,” she said.

“He settled in really well. He came home and ate dinner and is already trying to be the boss of the kennel. Mum spoiled him a lot – you can tell he was mum’s favourite.

“We’ve had a lot to do with him and he knows us so hopefully it’s not too much of a transition for him. He’s handled it great so far, I find most good dogs do.”

Amlin Emperor defeated Amron Boy in his heat – the first time Amron Boy had been defeated in his six-start career – running 29.54.

Despite drawing box four in the final, TAB has him a $12 chance in the all-in market (after opening at $71 before the heats) and is the $4.60 third elect in a very even semi-final.

Amlin Emperor leads all the way and takes out the fourth heat! 👏

Amron Boy was huge as he weaved his way from the back to finish second and progress. Springview Noah and Belle Violin also go through. pic.twitter.com/HlUyjehClY

Terry was happy enough with the draw on Thursday night and believes he will improve off his heat win.

“He was in a restricted win final at Sandown recently and there was a 10 day gap between the heat and final. He was a little bit sore after the heat so they didn’t do much with him.

“He was a little unlucky in the final but he was also very underdone. Last week he looked impressive but there is still a lot more in him. He’s not 100% wound up yet.

Terry’s other runner, Fearless Rory, has drawn box one though she is unsure if that will be a help or a hinderance come Thursday night.

Fearless Rory has just three third placings to show from four Sandown Park starts – two of which have been from box one – having started his career with four straight wins.

“I thought his heat run was a lot better, but I think it was because he was drawn out wide,” Terry said.

“He’s still not beginning as well at Sandown which is a bit disappointing because he can begin well on the horseshoe tracks.

“I thought he would have figured it out by now but he just hasn’t. On form it looks like he’s slow early but he does actually have a lot of speed, he just hasn’t done it in a race yet.

“But he is learning with every start, it’s just taking a little bit to put it all in one run. If he can step on terms I know he’s got enough speed to run good sections, but until he does it it’s hard to get too excited about things.”

The first of four Launching Pad semi-finals will jump at 7.34pm.