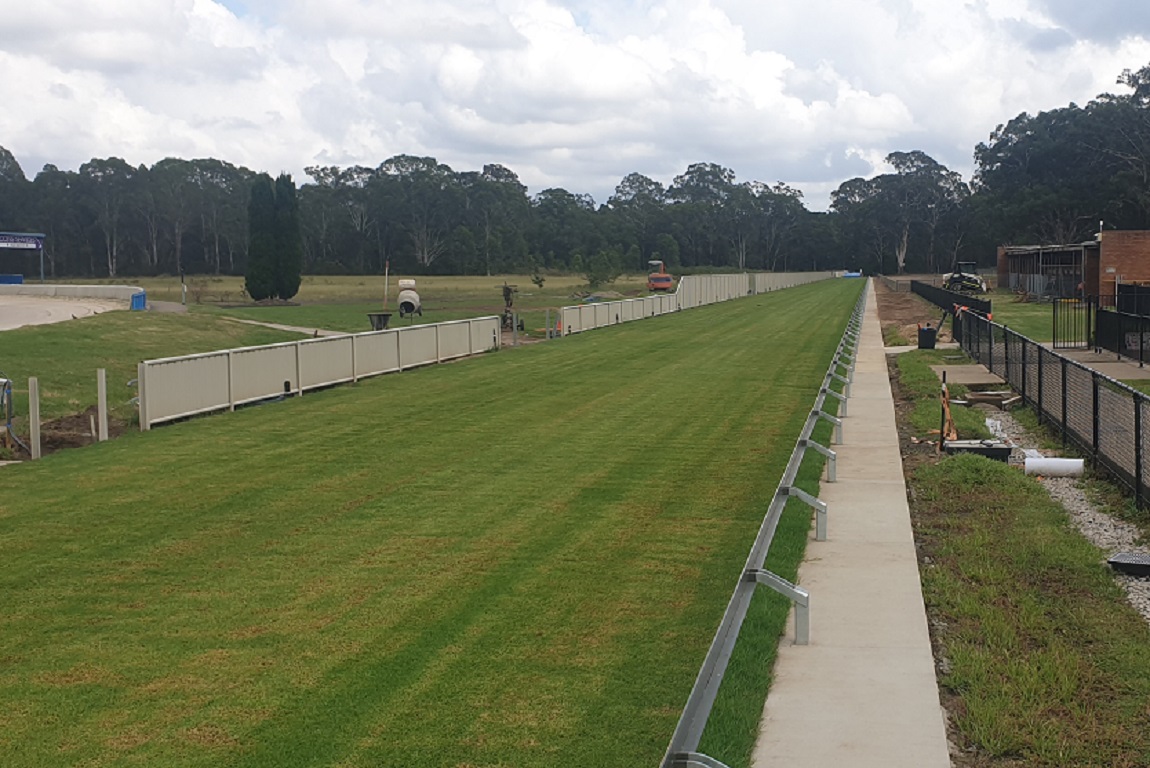 The son of Barcia Bale posted quite stunning sections (5.34s and 17.60s) yet runner-up Unreal Ethics managed to get within 2 ½ lengths at the finish.

To the eye, he might have been considered to be fading late yet his final section was a solid 11.75s.

Times on the night were quick with Mack Boy posting a clear career best (29.74s) some 40 minutes before Flying Ricciardo dazzled.

Just hours before Flying Ricciardo’s win at Wentworth Park, a notable return to racing was seen at Richmond – for hound and trainer alike.

Barrington’s lightly raced sprinter Classic Reign had not raced since coming on season in November and then his time in St Vincent’s Hospital curtailed any racing for the Berkshire Park-based trainer.

Her 18.75 secs win over 330m was a personal best and kennelmates Additional Asset and Megla Magic (Flying Ricciardo’s siblings) are close to a track return.

“She’d done next to no work before the win and the lack of trial and race fitness flattened her,” Barrington said.

While sidelined, Brian Barrington’s son Darren took control of the Richmond straight track project and the new facility in about to be fully tested.

“On Monday and Tuesday, lure drivers will undergo a training program for the lure system which is the same as Murray Bridge and Healesville,” Richmond CEO Richard Griffiths said.

“The project was delayed by COVID-19 and works only commenced in November.

“Interestingly, it’s the same ground the old straight track was on years ago here at Richmond and it’s probably a little shorter (325m) than what’s ideal but we’re delighted with the outcome and there will scope for change later.”

Racing is expected commence in early to mid-April with trialling sessions well before the first Saturday morning meeting.

“We’d love to turn this into a real family day yet the challenge is competing with junior sport,” Griffiths added.

Hear Footsteps’ wayward antics at Ipswich on March 6 were not enough to deny the red brindle dog his second win at start 29.

The decision by stewards to charge the son of Collision with GAR69B ‘Failure to Pursue with Injury’ and order the dog’s return to racing be subject to the completion of a satisfactory trial was confusing at best.

Here’s the vision of the concluding stages of that 431m contest on March 6:

The rationale behind the decision to not invoke a marring charge was asked of the Queensland Racing Integrity Commission and Chief Steward Alex Kitching responded with: “The Stewards decision involving Hear Footsteps in Race 10 at Ipswich on March 6 is the correct one in accordance with the Greyhound Australasian Rules of Racing (GAR).

“According to the GARs, the definition of marring is the act of a greyhound which turns the head and makes head or muzzle contact with another greyhound and failing to pursue the lure means when a greyhound turns its head or visibly eases during the running of an event.

Without access to head-on vision of the concluding stages, it’s not possible to deem whether Hear Footsteps made “head or muzzle contact” but he intentionally moved off his racing line with the intent to marr (then) leader Zulu Attack.

QRIC stewards are standing the original decision and that’s understandable given the wording of GAR69B but that merely highlights the inadequacy of Greyhounds Australasia’s rules.

Time has come for significant change to be made … and include amendment of GAR69 so it asserts “the intentional changing of a racing line to impede a rival” – or the like.

Post-race Hear Footsteps was vetted and found to have injured a near-side pin muscle but should such a minor injury mitigate a more obvious outcome? That’s becoming an all-too-common and convenient escape clause for wayward types.

Following a clearance trial, Hear Footsteps returns to racing with the prospect of – heaven forbid – marring and it be deemed only a first offense.

The need for change if further illustrated by the antics of Pearl’s Entity in Victoria.

At Horsham on February 16, she did this and was deemed to have failed to pursue the lure thus avoiding a three months penalty of a second marring offense.

She was then cleared to race again (except for Warragul and Horsham) following a March 2 trial at Cranbourne.

Interestingly, Pearl’s Entity is drawn to contest race three at Geelong on Tuesday but should she be ineligible given what she did to poor Steamy Jack (box four) in an official clearance trial?

And let’s not forget noms for the Geelong March 16 meeting did not close until the day after this Warragul episode!

Furthermore, Pearl’s Entity failed a clearance trial at Geelong on January 19 and there’s a head-on view to properly assess intent.

To date, Pearl’s Entity has eight starts and four public trials and offended (charged or not cleared) four times.

All concerned – trainers, GRV and GA – should be acutely embarrassed with Pearl’s Entity’s capacity to continue disaffecting races, other dog’s confidence and wagering outcomes.

Changes must be made to protect the innocent and rid greyhound racing of a particularly ugly look.

SOUTH OF THE MURRAY

While Pearl’s Entity has had chance after chance to do the right thing, former Sandown CEO and GRV Deputy Chairman Greg Miller, earlier this month, was sacked after one infraction.

GRV have a wholesale ban in place on any staff or Board member wagering on greyhound racing – not just Australian tracks but Caliente (Mexico), the UK, USA and New Zealand.

It’s understood that Miller, via a quarterly audit of his betting accounts, was found to have had a “Mystery Bet” of $7 which ended up on a greyhound race at Goulburn.

His “what’s on next” gamble might well have landed on a USA gallop or trot race, NZ harness or even in Malaysia, Singapore, Korea or Japan but it was Goulburn dogs!

A first offense and he’s out. Fortunately, the death penalty in Australia was abolished for capital punishment in 1973. Miller’s ‘crime’ was far from a capital offense but more like being incarcerated for ‘J’ walking.

That said, GRV acted in accordance of their rules but does that make the rules right or fair?

SHOULD IT BE CURTAINS?

Welfare, track safely and wagering integrity are cornerstones of what the NSW Greyhound Welfare and Integrity Commission is about.

Reaction to accidents needs to be measured yet the significant injuries sustained by Cosmic Wind at The Gardens on Friday draws attention to catching pen incidents.

The youngster collided with the catching pen ‘return gate’ and suffered a fractured off side hock in addition to rupturing her off side Achilles tendon.

Some 20 years back, curtains were drawn from outside to the running rail to corral dogs in the catching pen and, maybe, it’s time to revisit that process.