ON The Bit’s super impressive maiden win at Ballarat on Wednesday turned heads both on the track and then strangely in the stewards room.

ON The Bit’s super impressive maiden win at Ballarat on Wednesday turned heads.

The son of Orson Allen was purchased by Group 1 winning jockeys Harry Coffey, Jye McNeil and John Allen after breaking in and trainer Matt Lanigan had every right to be overjoyed – and relieved – that the black dog had prevailed in a slick 25.01.

READ MORE ABOUT THE WIN HERE

What followed for Lanigan was a bizarre Q & A (regarding wagering) from Greyhound Racing Victoria (GRV) stewards which went beyond the pale.

The first Fixed Odds price re On The Bit was posted by Bet365 on Tuesday evening ($3.30) and, just 10 minutes later, was into $1.50 – the early ‘divers’ therefore setting an adjusted market for all other corporate wagering operators.

As illustrated, the dog was no better than $1.60 (fixed odds) on the day and it was an easy watch for any punter supporting the youngster despite his tardy beginning.

Lanigan, however, was soon asked by stewards whether he’d backed the debutant and the stewards’ report asserts: “he was unaware of who may have supported the greyhound”.

Does that infer that stewards asked Matt Lanigan, given he “had not supported” the dog, if he knew who supported On The Bit? 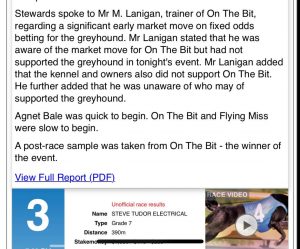 Don’t forget, On The Bit was on debut – not a six start maiden with poor form.

The Stasi-like grilling of Lanigan must have hit a chord with GRV’s hierarchy as the report was then amended – without inference to the kennel and owners –  to this:

Wagering integrity is a priority in racing and sport but backing a winner is, seemingly, not ‘kosher’ with GRV.

And this appalling practice is nothing new at Chetwynd Street!

Let’s quickly recall the 2020 Warrnambool Cup series and the shenanigans stewards carried on with after Andrea Dailly prepared six winners on April 30.

Meanwhile, at Capalaba on Sunday, the well related Release The Rage, Merchant Navy and Wolf Steele each won heats of the Bob Vernon Memorial Maiden series over 366m.

The three were on debut, each heavily supported and much like On The Bit, saluted in smart times.

Will QRIC stewards be asking Tony Zammit (Merchant Navy) or Tony Brett (Release The Rage and Wolf Steele) if they’d had a bet … or did they know of anyone who had done so?

The separation of integrity, regulatory and commercial practices is in place in NSW and Queensland and it’s a functionality which promotes an independent view of racing but that comes at a significant cost.

GRV is blurring the lines. The zealous questioning of Matt Lanigan and the Andrea Dailly critique are only small pieces in a disturbing puzzle. What/who drives this mantra … and is it merely justifying an existence or something more troubling?

One upsetting remnant of the McHugh Special Commission 2016 Report is the decision not to seek orders to redact the wildly inaccurate metrics on the NSW greyhound population.

The numbers quoted by McHugh failed to consider dogs retired to owner’s home as GRNSW, at the time, did not have processes in place to identify a retiree’s existence or location.

That oversight festered activist’s rage and focus. Much has changed in the past five years but negativity lingers.

In the UK and Ireland, greyhound racing is constantly under siege yet the Greyhound Racing Ireland and Greyhound Board of Great Britain are fighting back.

And a powerful social media post, this week from the GRI, went this way by means of a personal post from a participant: “My 11 retired greyhounds, 6 are 6yrs in March all the same litter the other 5 will be 7 yr old [in] March. These [pictured below] are all out of the same mother Milldean Tally. [They had] 120 races between 14 dogs, 104 losses, 4 unraced.

“All still living a wonderful and happy life TOGETHER with their RACING family.

Between them they have LOST 104 races.

“Every one of those 104 races cost money for entrance fees and travel expenses.

“They won between them only 16 races. Greyhound racing is NOT about winning money. Greyhounds LOSE races all the time.

They are not badly treated or shot for losing races that is just malicious propaganda from animal rights extremists.

“The majority of greyhounds spend their career with at least one of their siblings and often quite a few more.

“They have great social lives and spend lots of time with not only humans but also other greyhounds.

“Our greyhounds are not sprinkled with fairy dust just before re-homing. They are wonderful dogs because of how well they have been treated from birth. And how much time they spend doing interesting and enriching activities with people who love them.

“None of these 11 greyhounds are on a rehoming list or an adoption list and because of this animal rights extremists claim they have been euthanized.

“The facts are that many, many, many, many racing greyhounds are never rehomed or adopted. Because their families would never dream of giving them up.

“Greyhounds are bred by families.

“Greyhounds are raised by families.

“Greyhounds are trained by families.

“Greyhounds are raced by families.”

No one in 2016 considered asking NSW families about their retirees and it’s a legacy which deserved – and deserves – attention.

IN THE SHAKY ISLES

Group 1 racing was the main fare in Auckland on Sunday with heat of the NZ$30,000 Railway Sprint and NZ$80,000 to-the-winner Auckland Cup decided.

The Auckland Cup promises to be a combative affair as Peter Ferguson looked to secure the feature for the second successive year.

Fergie’s Aussie ex-pat Drink Shoeys was untroubled to win his cup heat in 29.88s from the gallant Rivalries.

Since arriving in New Zealand in November, Drink Shoeys has saluted in eight of 12 starts yet had to play second fiddle to Federal Morgan at Manawatu on March 8 in a record breaking 25.25s.

Federal Morgan’s NZ earnings have been buoyed by a series of feature race wins – the most recent at Wanganui on February 19 in the G1 Hatrick Classic when he collared kennelmate Big Time Lantao late in 29.89s.

In the Auckland Cup Final, Drink Shoeys has secured box 1 and, therein, favouritism. He’s got the pace to match Federal Morgan (box 8) early on and that’s the tipping point.

In 2020, Ferguson’s Silenci prevailed over Pinny Mack and kennelmate Robson with box one making all the difference on that occasion.