Greyhounds in 2016 became a metaphor for government overreach and despite the positive trajectory, the aftertaste of disrespect returned this week.

Greyhound racing, in 2016, became a metaphor for government overreach and, despite the very positive trajectory the code is on in NSW, the aftertaste of disrespect returned this week.

All three racing codes in NSW have worked diligently to continue operations in a Covid-Safe manner yet Wednesday’s meeting at Gosford (which had been transferred from Wentworth Park) was shockingly abandoned following intervention by Liberal Terrigal MP Adam Crouch.

Crouch, first elected to parliament in 2015, was central to the decision after a reporter from the Central Coast Express Advocate sought a response on the decision to move the meeting to Gosford.

“Every day the Premier and [Chief Health Officer] Dr [Kerry] Chant have been clearly stating that non-essential events and activities cannot occur during the lockdown,” Mr Crouch said.

“We cannot have one rule for greyhound racing events and another rule for everyone else, which is why I intervened with NSW Health to stop COVID-19 potentially spreading into the Central Coast region.”

If Adam Crouch was so significantly concerned about the potential of COVID-19 “spreading into the Central Coast region”, just how did the Gosford gallops meeting proceed on Thursday?

The hypocrisy is stark and further drives mistrust from greyhound racing participants.

The first race at the gallops was won by the Warwick Farm-based, Joe Pride-trained, Not Another Reiby while the Randwick-based Mark Newnham’s Bullet Force finished runner-up.

Both trainers travelled horses from the precinct which Crouch deemed, less than 24 hours earlier, to be verboten.

Interestingly, the oversight of racing in Victoria – the epicentre of crushing Covid-19 lockdowns – considers all three codes of racing to be part of authorised work and clear to function (within guidelines) at this time. 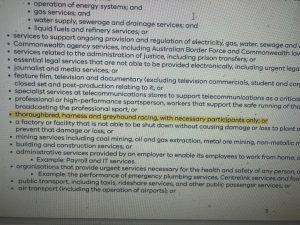 For more than 12 months, GRNSW has worked tirelessly to ensure greyhound racing’s participants comply with health regulations and GWIC has marched in step.

Adam Crouch’s intervention was opportunistic. He took a pot shot at an easy target and self interest was his only motivation.

The Terrigal seat, unfortunately, is an ultra-safe Blue Ribbon seat for the government and no harm will come to Crouch at the ballot box in 2023 yet his personal agenda is disturbing.

On Sunday, the constraints in NSW regarding Covid Safe zones ramped up to the extent that trainers from Fairfield, Liverpool or Canterbury-Bankstown Local Government Areas will not be able to nominate until further notice.

GRNSW is looking at a range of options to support trainers in the affected areas. The decision underscores that public health outcomes – so badly misrepresented by Adam Crouch – have always been at the forefront of GRNSW’s management planning and decision making.

On Friday, the Victorian Greyhound Owners, Breeders and Trainers’ Association agreed to place their second day of strike action (July 22) on hold.

The Victorian Office of Racing has arranged for the Greyhound Racing Victoria and the GOTBA to enter an independent process which will be conducted by mediator Tim Lyons.

GRV’s press release offered: “GRV and GOTBA jointly acknowledge that it is in the interests of the sport and the people, that the process is entered into in good faith, on specific issues, and with an intention that there be agreed outcomes and actions at the end of the process.”

Initially, the confidential mediation process (proposed by Greyhound Racing Victoria) was to be conducted over six to eight weeks with the outcome not binding on GRV.

The process has been constrained to three to four weeks and there will be agreed, binding outcome.

While mediation, in its true sense, attempts to with deal with dispute resolution, many rank-and-file participants do not trust the GRV’s word or deeds and actions will speak louder than words.

This is the last chance to dance. Should GRV not give ground on issues at the core of the GOTBA’s “acceptable outcomes for a better sport for participants” this skirmish will escalate exponentially.

After a routine visit by integrity and welfare officers at their Maffra property in January 2017, Des and Diane Dooley faced live baiting charges after a piece of lambswool (on a rope) was found and was in contravention of GRV’s stringent rules.

The husband-and-wife team have been engaged in greyhound racing for a combined 95 years without history of infringement but were both given life disqualification by GRV in February 2019 for this single breach.

Diane Dooley appealed her sentence and it was reduced by the Victorian Civil and Administrative Tribunal to just eight months.

Des Dooley’s life term was later confined to 18 months but, only last week, after being deemed by GRV as not a ‘fit and proper person’ to attain registration, VCAT overturned the GRV hard line and he can now own and or train greyhounds again.

The saga has played out over for more than 4 ½ years and cost the Dooley family $80,000 in legal fees, Des’ role as Racing Manager at Sale and immeasurable stress – all over a lambswool remnant which, in its day, may have been a car seat cover.

One important element of the GRV/GOTBA mediation is formulation of better policy and outcomes. Live baiting is abhorred yet the minimum life ban perspective from GRV is just appalling considering what’s the Dooley’s were deemed guilty of.

Gale force winds have caused a deal of property damage in the past few days yet, on Saturday morning at Richmond, the morning program progressed without incident.

On the day, times run by many winners were not substantially quicker than previous efforts but the wind – whether assisting or opposing – is certainly an aspect which deserves disclosure.

At all TAB venues in NSW, a Watch Dog Weather Station is installed (below). 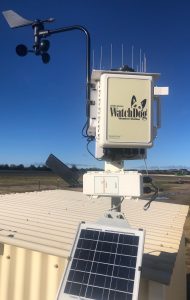 Stewards’ reports need to include the climatic conditions meetings are conducted in and whether it’s determined that wind had any affect on the times posted.

The technology at Richmond is in place and it certainly would come in handy at Capalaba, Healesville and Murray Bridge.

The proposed new straight track at Goulburn is expected to run south to north and the prevailing wind (usually a westerly) at such a vast site can make it tough going on the circle track and it’ll be no different up the straight.

And that makes the English/Irish mode reporting in formguides engaging. A rating for any venue (time-wise + or -) in respect to how the surface or climatic conditions affects performance (times) and it’s clear, hands on reference point for punters.

The ongoing NSW Legislative Council Select Committee inquiry into the Greyhound Welfare and Integrity Commission has been delayed – again.

A final forum at Wentworth Park was to have been conducted on July 15 but was pushed back to July 28 then an open forum sometime in September.

Right now, greyhound racing in NSW is firing on all cylinders but this agenda driven process is debilitating. The proper funding of GWIC is said to have been sorted and GRNSW no longer need to be asked to ‘pony up’ for spending outside their remit.

Prizemoney increases are imminent and the ongoing Covid-19 constraints will, in a perverse way, only assist income streams.

The lone wolf in regards to discontent seems to be One Nation MLC Mark Latham. Why is that?