In an era of wall-to-wall racing and nomination counts being light, the madcap running of the first race at Horsham on Saturday came as no surprise. 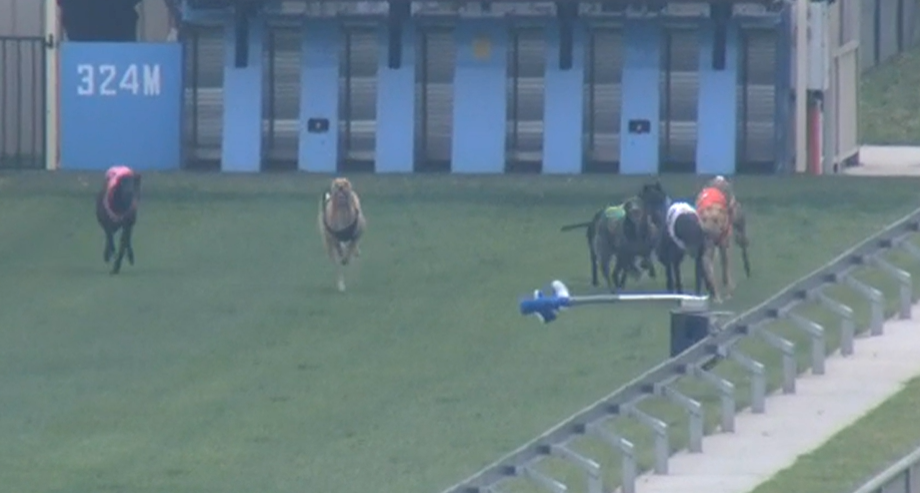 IN an era of wall-to-wall racing and nomination counts being light, the madcap running of the first race at Horsham on Saturday night came as no surprise.

Sanctioned and Guilty were scratched from the field of five, leaving Jeff Guy’s debutants Tweet It Is and Tango Temptation lining up against Mad Captain.

Despite the field being reduced to three, there was no lack of action.

Mad Captain has been placed in two of three starts (all at Horsham) with no ill intent but he certainly was placed in the naughty corner after this episode.

Racecaller Rob Testa, a man of great experience, said it all post-race: “Goodness, gracious me!”

Mad Captain’s antics rightly incurred a 28-day suspension and the need to trial satisfactorily before racing again but a different ‘kettle of fish’ was attended to by stewards at The Meadows a little earlier on.

A post-race veterinary examination reported: “sustained injuries to the right calf muscle and right hamstrings, [and] a 7 day stand down period was imposed”.

Avoidance of a pure failing to pursue the pure charge was arrived at due to the injury and it’s an escape clause which needs attention.

No doubt a significant injury (toe fracture, hock issue etc.) might see stewards not impose an FTP ruling with injury but for Tomato Tears to avoid sanction was miraculous.

The national rules will change on November 1 so that FTP and marring are considered one in the same but the veterinary escape clause remains.

In the case of Tomato Tears, he must trial before racing but his a seven-day injury escape is just ridiculous.

AGE IS NOT A NUMBER

Opportunity should be the cornerstone of grading and programming in many jurisdictions leaves a lot to be desired.

Take for example Masters or Veteran’s racing. In all states but Queensland, Masters eligibility only commences at 48 months of age but in many cases, the oldies don’t get much of a look in.

Queensland’s Masters racing commences at 42 months and the excellent prizemoney offered in the north has provided a windfall for owners and trainers.

Prior to the grading policy in place NSW, Masters eligibility was 42 months of age but was extended to 48 months.

What’s required is a transition to Masters racing (42 months to 48 months) which would provide a conduit and programming needs to include a Masters race on every card.

If advertised races don’t attain sufficient nominations, that’s life but without well considered programming, older dogs are going to ‘wither on the vine’.

And while on the grading processes, the ‘bush telegragh’ is suggesting that the “Aged Prizemoney” categorisation is to be phased out in Victoria.

Aged prizemoney has been in place for something like 10 years and has really worked against young dogs (Vic Breeders Maiden Final winners, for example) which emerge from maiden company with rankings which elevate to make the dog then contest a mixed grade (fourth and fifth) next time out.

Potentially, after three starts (all wins), mixed company is a youngster’s lot and it’s a particularly difficult transition.

In NSW, movement up from grade five comes after five wins (at one distance category/range) and lopsided grading was clearly highlighted at Bulli on August 28 when Zipping Conway was drawn to take on Wow and Good Odds Cash  in what was graded as Grade 1 to Grade 4.

No doubt Zipping Conway has a huge future and but his elevation to virtual Free For All company (after seven starts) underscores how young dogs can be ‘spat out’ by the NSW policy.

GRNSW needs to immediately attend to programming so that dogs step through grades against like kinds and that’s got nothing to do with (an expensive and time consuming) policy change.

Juvenile races, transition to Masters grades and restricted win races will assist. Greyhound Racing Victoria has identified their issues and are working towards a better outcome.

There is genuine discontent with the grading policy in NSW and GRNSW have commenced a consultation process in order to prioritise what needs to be done … let’s hope those making the decisions be will heed the wishes of participants.

With Goulburn readying for a complete facelift in addition to a new (sand) straight track being installed, it seems the right time to look at lure system options.

Covid-10 constraints have paused must planning for Goulburn but that has left time for options to be considered.

At Richmond, there’s been angst over the amount of interference in racing, with dogs diving left at the start but it’s really no different than circle racing.

What might mitigate the straight track interference is the install of a system like what has been designed and patented by James Phillips from Red Hounds Racing Repairs in Florida.

Ingeniously, Phillips has fabricated a lure system which not only retracts in an instant but also can be extended across to the middle of a (straight) track so that dogs will not dive left at the start.

The featherweight lure has great welfare upside and the vision below demonstrates its functionality.

Covid-19 health orders saw NSW racing constrained to zones and Wentworth Park has not turned the lights on since July 10.

The forced closure was taken in stride by participants and, just a few weeks back, a return to the Glebe track was expected be the first Saturday in October – a target date which is unlikely to be met.

Certainly, some trainers will be miffed that metropolitan prize money is not available in NSW but the decision by GRNSW to equalise prize money was the right thing to do but how long can it be sustained?

Thursday night racing at Albion Park, for example, offers owners more prize money greater than WP ever did and NSW owners will be tempted to send dogs north.

NSW Health policy will dictate what GRNSW can do but, surely, this hiatus at Wentworth Park, talks must have advanced on a final exit strategy.

The Wentworth Park lease expires in 2027, the Government wants greyhound racing to vacate but equitable compensation needs to be offered to leave in a timely manner.

Let’s hope, in these troubled times, some goodwill is shown by the Berejiklian administration and an alternate site and proper funding will be offered.

Only then can GRNSW can plan for the future with a degree of certainty.