THE news that Racing Queensland has splurged an additional $2.95m into general prizemoney leads this week's Sunday Afternoon Finish On. 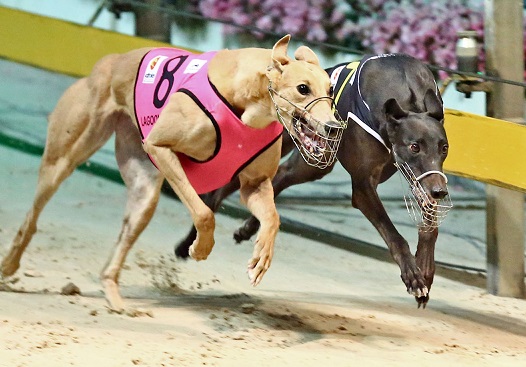 While Greyhound Racing NSW has acted positively regarding with prizemoney in recent weeks, the news, on Thursday, that racing Queensland has added a further $2.95m from January 1 will place more pressure on nominations for Northern Rivers tracks.

The Queensland prizemoney has a baseline of $1365 (to the winner regardless of distance) while a winner’s minimum at Albion Park on a Thursday night is $5200.

Aside from the excellent minimums, the rule of thumb split of prizemoney from first to fourth (65 per cent, 20 per cent, 10 per cent and five per cent) is strictly adhered yet a little ad hock elsewhere.

What’s missing here is consideration that all trainers (not just those with a winner) have fixed costs and winning prizemoney is not a true benchmark of promotion or sustainability.

Grading opportunities are also favourable in the Sunshine State. Novice racing (for maiden winners only) provide a conduit into the rough-and-tumble of graded races and it does not end there.

The other moot point is the ratio of prizemoney paid to placegetters for feature races.

In Tassie, there is no starters fee and no prizemoney whatsoever after fourth. The ratio of prizemoney is standardised across all three tracks yet the winners snare $2050 (of $2925) or 69.36 per cent while at Hobart on Thursday, Eric Haldane’s top grade winner Nando Dreamer secured $2285 or 64.03 per cent.

Eric, an affable yet typically frugal Scotsman who knows a bit about the training caper, has been scuppered by just over $120 as compared to a grade 6 winner at the same distance and that’s not gunna sit well whatsoever!

The runner up in the Christmas Gift (Wow) was ‘taxed’ in the order of $610 – that buys a lot of meat and kibble.

And the degree of separation accelerates as the stakes get higher!

A degree in pure mathematics is not required to attend to the imbalance, just attention to detail and a sense of fair play.

The festive season has always put pressure on the supply of meat for trainers (and rearing establishments) yet, after the downturn of herds following the recent extended drought, supply shortages has escalated all prices.

More than a 25 per cent increase has resulted in recent months and with supply in decline, it’s in the order of 100 per cent (or more) over 12 months in some areas.

And let’s not forget NSW has no assistance for breeders whatsoever.

Never has there been more important time to assess ‘starter’ or appearance fees and the propensity for trainers to use human grade beef for racing stock exacerbates costs.

In WA for example, a starters fee is paid to all (regardless of numbers) but no money beyond fourth outside feature events.

The new Queensland model will attract attention with a starters fee in place in addition for $20 every unplaced hound.

Add in the upswing in fuel costs, this caper of training greyhounds is getting really expensive and the model of 50/50 between owner and trainer adds weight to the importance of a fair prizemoney model.

Effective from New Year’s Day, NSW participants will have the benefit of newfound clarity on disciplinary matters.

For the first time, GWIC has provided guidelines (but not mandatory) for penalties for permanently banned substances to breaches regarding thresholds for substances greater than what is permitted under the Greyhound Racing Rules.

Every case is treated on an individual basis while considering aggravating or mitigating circumstances yet the published starting points for all disciplinary matters provides a level playing field.

“The penalty guidelines and inspection protocols have been developed in response to feedback the Commission has received regarding its disciplinary penalties and the manner in which it conducts its inspections of kennels operated by industry participants,” GWIC Chief Executive Steve Griffin said.

“The penalty guidelines are designed to provide participants with an indication of the likely penalty the Commission will impose for breaches of the racing rules and Commission policies.

“The guidelines are the most extensive in Australia inclusive of breaches beyond prohibited substance matters. The penalty guides are based upon precedent disciplinary decisions issued by the Commission, GRNSW and cases appealed to the Racing Appeal Tribunal in NSW and other jurisdictions.

The guidelines ensure the Commission’s disciplinary decisions are consistent as GWIC moves to a decentralised operating model that is designed to substantially reduce complex legal processes and the timeframes for determining the outcome of disciplinary actions undertaken by the Commission to protect the integrity of the sport.

Matters before the stewards will be dealt with at regional level which will ensure a timely, cost-effective outcome and the guidelines in place from January 1 assure consistency on rulings.

Seems like impasse over retained prizemoney from the early onset of Covid (April to July 2020) is under review.

A proposed nomination ban for the New Year’s Eve at Cannington has been lifted while Racing and Wagering WA considers options.

The natives were certainly restless yet further discussions with RWWA reps settled tension and in the next few weeks, a final determination will be delivered.

Meantime, WA deals with their first real cases of Covid for just on nine months and RWWA is focused on maintaining racing as a priority.

Excessive heat was the rationale behind the abandonment of the Boxing Day meeting at Mandurah and was not Covid related.