THE catastrophic floods in South East Queensland and down the eastern seaboard have been absolutely devastating and proven deadly.

THE floods in South East Queensland and down the eastern seaboard have been devastating, proven deadly.

Five people have lost their lives and many living in the heavily impacted towns – especially Lismore – must be contemplating whether defying nature is a battle worth waging.

In 2016, Lismore was flood bound and the greyhound track, so illogically positioned on an eddy of Wilsons River, was inundated yet the ‘moderate flooding’ level of just under 9.5 metres was nothing like the 11.59m recorded 12 months later and not in the same ballpark as this week’s record number.

The picture above is of how the Lismore track was left when waters receded in 2016. The site again flooded to a greater level 12 months later and water reached floor level of the second level of the club’s upstairs viewing area and committee room.

This record flood will have Lismore residents – along with the Greyhound Breeders, Owners and Trainers’ Association and Greyhound Racing NSW – contemplating just what to do next. Is Lismore ‘liveable’?

GRNSW has capital works programs which are mid-steam (no pun intended) so spending hundreds of thousands of dollars (and it will be that!) on a track which might well be inundated again next month is not sustainable.

The intersection of Leycester Creek and Wilsons River is the genesis of the problem and the Lismore City Council has a history of flood events!

The Council’s own records are sufficient evidence to say – “enough is enough”.

So, what is the (GBOTA and GRNSW’s) next move in the Northern Rivers?

And that’s where the potential new track at Chinderah (Tweed Heads) comes into play. The asset rich Tweed Heads Club has a Development Application in council’s hands for the land they have purchased.

Any development in the Tweed Shire has to pass very conservative decision makers and a local resident lobby which might not approve of greyhound racing being established nearby yet there is a path forward.

Local member Geoff Provest, the NSW Parliamentary Secretary for Police and Emergency Services, can promote an application to Government for the Chinderah site to be considered for State Significant Development.

SSD applications bypass council scrutiny on the score of improving tourist and recreation facilities even if located in a sensitive environmental area given the specific capital investment.

Time has come for the rubber to hit the road in the Northern Rivers. The State Government can assist with the processes to get the new Tweed Heads track built but will they?

Is the Chinderah site ‘floating’ Geoff Provest’s boat? Is the site ‘flood proof’? … if it is, the time is nigh to press on.

If Geoff Provest cannot assist with SDD, it’s time for GRNSW and the Tweed Heads Club to think again and not be afraid of change.

Tweed Heads benefited greatly (at the financial detriment of others on NSW Country Club’s funding model with GRNSW) by having on-course TAB operators.

The land was wisely purchased by Harry Pledger and the capital growth in the region was exceptional.

In 2017, former Lismore MLA Tom George assisted Lismore in securing funding for the track to be rectified but this is a different kettle of fish.

GRNSW allocates funds for the whole state and it’s just impractical to invest so heavily in Lismore at a time when money must be spent elsewhere.

If Geoff Provest can’t help the Tweed Heads Club (and greyhound racing as an entity)  jump this real hurdle, the most significant breeding precinct in the country will be compromised.

The cards need to be laid out. Lismore’s potential closure is the last straw.

No more BS, no more talk … it’s time for action.

The recent upgrade of prizemoney for Saturday night racing at Wentworth Park was the third and final tranche of increases from GRNSW for this racing season.

One little glitch was quickly realised by trainers’, however.

With a Grade Five race at WP now $6000 to-the-winner and a Free For All at $7000, top grade winners were having prizemoney withheld (until after a clear swab was returned) by GRNSW on their feature race policy.

That glitch was quickly attended to and the non-retention ceiling for all races is now $7200.

Ipswich will be a hive of activity for the next six to eight weeks.

So devastated by the floods, Albion Park’s kennels are in terrible shape and, unlike the 2011 inundation, the tides have been high and not allowed the water to recede as quickly.

The rain event had all creeks and rivers in Brisbane and record levels at time of high tides.

The lure motor(s) from Albion Park and Capalaba are with the ‘doctor’ while all sand an underlying geo-fabric material has been removed and work will start on the kennels at low tide (to remove damaged items and clean wholly) this week.

Thereafter, walls will be assessed for structural integrity and that where time for Albion Park to return to racing is intangible.

Just what sand profile turns at Albion Park this time. The sand on the Ipswich track is different yet stands for heavy traffic very well.

Short term, Ipswich will race seven days a week and the powers that be will have amble evidence on what the best outcome will be.

Full marks to the GBOTA for allowing so many trainers to trial after the last race at Wentworth Park on Saturday night.

It was organised chaos at the 520m boxes and in the catching pen/kennel precinct yet, after nearly two hours, all wandered home without too much fuss.

A big tick to all staff yet hefty brickbat to one trainer who petulantly demanded that he’d booked an early trial and refused to allow trainers (who had travelled from afar) to sneak a trial in between others to facilitate an early escape.

Storms had caused the abandonment of the latter half of the Miracle Mile at Menangle and Bureau of Meteorology charts showed it was heading towards Wenty.

The staff and trainers were doing their best under trying conditions and working in with each other – except for one buffoon.

There’s a lot to yet unpack from the rich Robert Smith Memorial Maiden heats at The Gardens on Friday.

Gaining most attention was the late scratching of Reel ‘Em Bluey from heat one with stewards questioning trainer Terry Millar regarding the bona fides of him training the debutante son of Worm Burner.

The scratching and subsequent outcome aside, the betting around Reel ‘Em Bluey delivered a shocking outcome.

Opening $16 with TAB, Reel ‘Em Bluey was into $1.95 before he was withdrawn under Greyhound Australasia Rule 25 (1)(b) which reads: Where a greyhound has been nominated for an Event and in the opinion of the Stewards- the greyhound is trained by a person other than the registered Steward’s report 6 trainer; the Stewards may order that the greyhound be withdrawn from the Event.”

Reel ‘Em Bluey was stood down from racing pending the outcome of an inquiry.

Moreover, an inquiry needs to be held on the scale of deductions.

The TAB snared 39 cents in the dollar with Reel ‘Em Bluey being scratched (despite the dog being $16 when markets opened) while Sportsbet’s ‘tax’ was 43 per cent of the face value of the ticket. 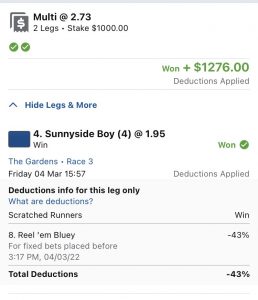 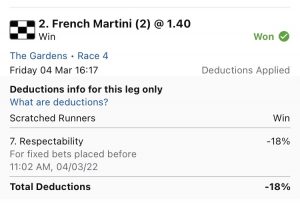 Sportsbet played by their rules yet, in a market of, let’s say, 125 per cent at opening (with Reel ‘Em Bluey at double figure odds) the deduction would have been maxed out at eight cents.

In the end, the wager was successful yet, should a $276 return be an acceptable bet (risking $1000) without the prospect of cancellation?

At the very least, an offer of the all-up at SP would be reasonable.