PATRONS' shenanigans at tracks, regardless of code, cannot be measured yet the antics of a Central Coast resident on Friday ranks beyond stupidity. 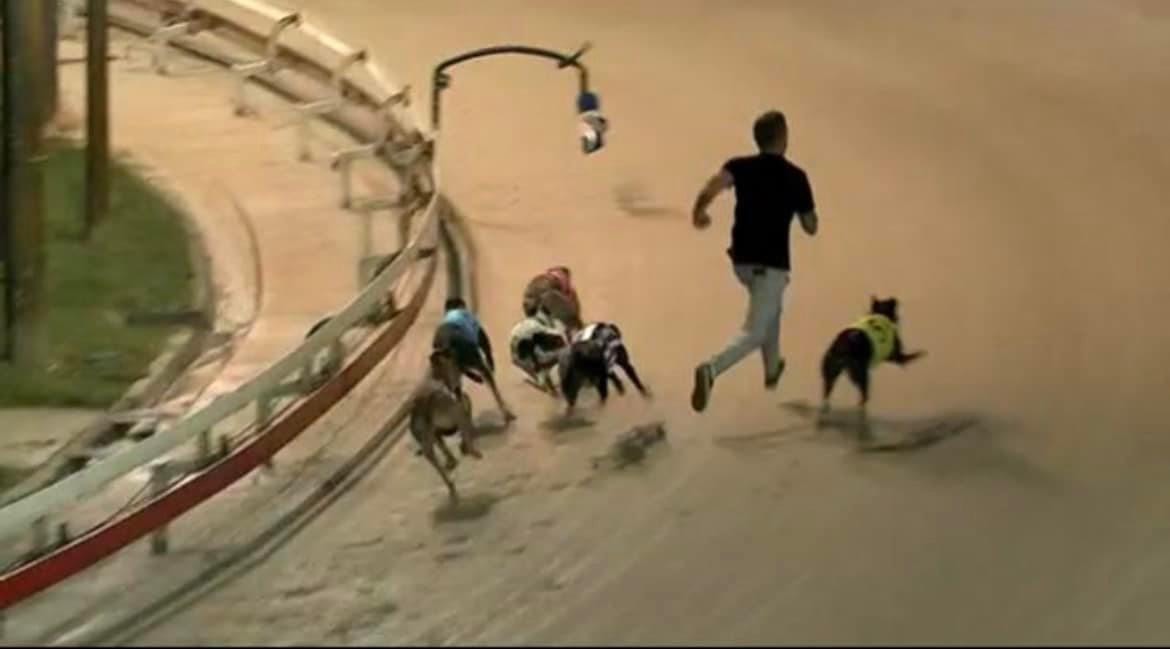 PATRONS’ shenanigans at racetracks, regardless of code, cannot be measured yet the antics of a Central Coast resident at Gosford on Friday night, ranks beyond stupidity.

The imbecile, who is known to police, entered the track in the home straight and, with mobile phone in hand, went within a ‘heartbeat’ of the lure knocking him to the ground.

“We have handed all evidence to Gosford police and I expect charges will be soon laid,” Greyhound Welfare and Integrity Commission Chief Steward Wade Birch said.

“The individual had been refused (alcohol) service earlier in the night … he’d been to the track a few times and was quite identifiable.”

Charges, if sustained by police, for illegal entry into a sporting arena, carries a fine of up to $5500 yet the damage this fool could have sustained – and to the greyhounds – is not quantifiable.

The three racing codes will never be immune to random acts of madness and this incident won’t be the last.

Some 15 months back, at Trentham in New Zealand, Ruby Rocks retained this 1600m race  with the perpetrator arrested at the track.

At Gosford, there was no apprehension on the night but this old mate will face a NSW Court and, thereafter, be dealt with by GWIC.

New Greyhounds Australasia Racing Rules came into force on May 1 and it was only six days before one variation was enacted in a very public way.

The immensely talented Zac’s Entity, seemingly, had a 715m Grade 4/5 at his mercy when his attention to pursing the lure waned.

Stewards slapped the black dog with his second marring offense which, from May 1, attains a 28-day racing on all tracks. Previously, a second offense warranted a three month ban on all tracks.

And the May 5 incident at Sandown is exacerbated by his previous effort – at Sandown also – when a close second to Golden Quest in a sharp 34.04 over 595m.

After spotting Golden Quest three to four lengths as the field returned to their starting point (and travelling just on 3kph quicker on Isolynx), he merely marked time late.

A veterinary inspection found the dog “to have a right shoulder injury, a 5 day stand down period was imposed” and no official sanction (failing to pursue the lure) was recorded but was required to trial again before racing.

That trial (from box five) went this way:

No issue with the trial (albeit in a very slow 30.05 for the 515m) for mine but the rule which sees stewards defer to a satisfactory trial for such a minor veterinary issue (let’s not forget he powered up to win and failed to go on with the job), speaks more of stewarding competency than the rule itself.

The new rules and or Zac’s Entity is not the problem, it’s the capacity of many stewards – in all jurisdictions – being unable to ‘read a race’ and a fix must be found.

The new GA rule set also carries thresholds for therapeutic substances and residue limits which would have otherwise have met with suspensions/disqualifications for positive swabs returns.

For example, the anti-inflammatory Meloxicam and cortisol dexamethasone previously had a zero tolerance in swabbing yet, from May 1, screening limits to both – and another three non-steroidal products (carprofen, firocoxib and flunixin) – is a step in the right direction.

Importantly contaminated meat supplies may become a thing of the past due to residue limits introduced. Greyhounds ingesting protein sourced from an abattoir with trace elements of a banned substance will be treated as a contamination under the residue limit.

The Preferential Box Draw process (at Addington) in New Zealand continues on Monday with eight of the 12 races being staged with the PBD in place.

Day two of the PBD processes in C1 (the Kiwi’s lowest class of graded event), seven races were conducted with the box draw ‘seedings’ and all races were run without one significant collision.

Two dogs were hampered at the first turn (without impact) in separate events.

Let’s hope some decision makers on these shores a few minutes and look at the replays of the C1’s on May 2 at Addington. It’s compelling viewing in respect of animal welfare.

The return to racing at Albion Park (and Capalaba previously) has relieved a lot of pressure on trainers and it’s back to normalcy in South East Queensland.

A lack of trialling opportunity (with Ipswich the only prospect on Thursday mornings) HAD seriously hindered the education of youngsters and brought into focus Racing Queensland’s new project at Yamanto.

It seems that approval of the three-track venue at Yamato is in the final stages of approval with the Queensland Planning Department. There have been seven stages of the Government process and, if the ‘mail’ is right, stage seven is at hand.

While difficult to update participants as the process navigates through red tape, RQ certainly needs to deliver some good news in a timely manner.

RQ does not have control of the process but negativity as its own energy source and the longer this announcement is delayed, the more restless the natives become.

The final touches have been made and a new era at Richmond kicks off on Friday on a completed rebuilt track with new distances.

Richmond’s refurbishment has taken 13 weeks, the timeline exacerbated by rain incidents which stopped work for days on end.

The most radical change at Richmond – considered by many as NSW’s best and safest venue – is the movement of the 535m boxes forward to 520m.

Such is the positioning of the new boxes, the dogs with greater pace are expected to clear rivals with greater ease while a 40m transitional curve into the first turn should alleviate scrimmaging.

Trials commence on Monday and the Londonderry circuit will be a hive of activity all week.

The following project for GRNSW is the regeneration of the Thirlmere trial track while the upgrade of Muswellbrook follows.