After finishing fifth in a Cup heat at Warragul in January 2021, a debilitating back injury sidelined the talented Rolling Stone for a staggering 16 months.

AFTER finishing fifth in a Cup heat at Warragul in January 2021, a debilitating back injury sidelined the talented Rolling Stone for a staggering 16 months.

His return from 485 days on the sideline at Healesville was as emphatic as it was impressive.

A stumble at the start proved critical in the Grade Five Final seven days later and he finished last behind Shima Sheen in 19.38 yet his return to the winner’s list won’t take long. He’s a quality sprinter.

Adding depth to his story was the remarkable training achievement performed by Karen Pitt when Zipping Albert stepped out at Warragul on May 10.

‘Albert’ had not raced since December 1, 2020 when finishing seventh at Warragul (behind the classy Immunity) yet, after 525 days off, he posted win nine (at start 18 – again at Warragul) in strong fashion.

Early on, Zipping Albert showed the potential of a top liner and won the rich Bendigo Gold Rush Maiden in 2020.

Two hock injuries and successive ‘back muscle’ tears had the blue dog effectively house bound for more than 12 months. His recuperation and return to racing is a story which needs to be shouted from the rooftops and let’s hope the rising four year old can race on for a little while yet.

Racing careers aside, the bond both dogs have with Karen Pitt will be lifelong and something which should be celebrated.

Mazu’s gritty win in the Group 1 Doomben 10,000 at Eagle Farm on Saturday came only days after his place in The Everest at Randwick on October 15 was confirmed.

The narrative was all about an emerging star being a force in the world’s richest race on turf and the 1200m contest is still more than five months away.

Greyhound racing’s equivalent is The Phoenix at The Meadows yet the December contest – and the potential starting line-up – has yet to gain any media traction.

Racing NSW does not need to be ‘poked’ to promote their flagship race and, at a time when greyhound racing is surging in popularity, the Victorians need to get their thinking hats on – pronto!

Will Sportsbet ante up and look to Wow She’s Fast to do what back-to-back hero Redzel did in The Everest in 2017 and 2018.

NSW superstar She’s A Pearl should be the first priority for any slot holder but there has been no discussion, let alone promotion, around The Phoenix.

GRNSW’s TAB Million Dollar Chase has been a runaway success and it will be interesting to see what The Meadows and Greyhound Racing Victoria come up with for The Phoenix II.

Is $1m to-the-winner a possibility? Will broader interest from non-racing entities supplant the likes of Greyhound Racing NSW, Racing and Wagering Western Australia and Racing Queensland for slots?

There’s a lot of questions to be answered. The sooner GRV and The Meadows launch the December 10 (the date is a guess as GRV’s calendar for December is not populated whatsoever) feature the better.

Racing and Wagering Western Australia are not only the regulators of racing WA but also turn their hand at promotion in all three codes.

At Cannington on Wednesday, RWWA’s first starter in their “Chase The Dream” promotion with Our Dream Girl having her first start.

The October 20 daughter of West On Augie was purchased at five months of age from industry icons Dave and Christine Robartson with Christine also taking on the trailing role.

Only a fair getaway from box two had Our Dream Girl tracking winner Garnett’s Gem from the first turn and despite making late ground, she was 2 3/4 lengths away in 29.99.

The genuine upside to the promotion is that 20 new ownership groups have been immersed into the sport and most attended the rare 13-race card program.

Whole ownership of Our Dream Girl (10 shares of 10 per cent) was won in a competition just over 12 months ago and round two of RWWA’s Chase The Dream promotion is about to close.

The second tranche is understood to be massively oversubscribed and, this time, a brindle son of local hero Tommy Shelby will be the big prize.

Getting involved requires potential stake holders to visit facilities and be immersed into the real workings of how greyhounds and reared, educated, trained and how retirement to a lounge suits them to a tee.

There’s just six days remaining before political expediency is peeled back somewhat at 6pm on May 21.

Greyhound racing has been highly politicised since the Baird/Grant ban was announced in 2016 and, when the Greyhound Prohibition Act was repealed just over five years ago, anti-greyhound racing entities were frenzied.

Unafraid of posturing on a platform of lies and sensationalism, the anti-racing sector was given a free kick this week by NSW One Nation MLC Mark Latham.

Mr Latham took to social media to scold his parliamentary colleagues for not closing down the NSW Greyhound Welfare and Integrity Commission which he called a “self-serving Stasi outfit”. 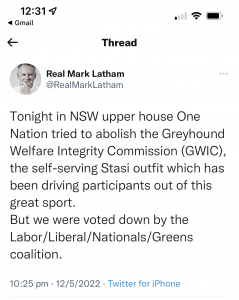 It’s great to have allies in the halls of power and Mark Latham has been a genuine critic of the Baird ban (and the grossly inaccurate McHugh Report) but this attack on GWIC only harms greyhound racing’s image.

No doubt GWIC got off to a very rocky start and that, in fact, was due to the rushed processes initiated by the Baird Government. It’s taken time for the right course to be navigated and there’s still things to improve.

It’s time to work together and not tear things apart.

While under attack on one political front, GWIC has made steps to protect the welfare and integrity of the NSW greyhound racing industry by means of whole of life tracking.

The traceability processes will be rolled out before the end of the financial year and will provide certainty around retirement number and locations of all greyhounds.

Data will be in real time and provide fact around outrageous statements peddled by activist entities regarding life expectancy.

The GWIC program is a first in Australia and, now, the UK Greyhound Board has neigh relocated the program.

Key elements of the British model are breeding, rearing, racing and retirement.

It’s a familiar tune but one which needs to must be properly implemented to assure others that welfare is a top priority for all participants.

The English and Irish have always raced with preferential box draws and an interesting insight into the £175,000 (A$309,277) to the winner StarSports/TRC English Derby heats was exposed when the 32 heats were drawn on May 11.

Of the 192 greyhounds engaged, 84 were seeded as middle or wide runner and each heat was constrained so that the ‘middles’ and ‘wides’ were averaged across all heats (12 heats of two and 20 of three non railers).

Limerick 550y record holder, the Graham Holland-prepared Part Blake – a grandson of Brett Lee – is the nominal pre-post elect for the June 26 decider while 2021 winner Thorn Falcon – in a near record 29.06 at Towcester – is again highly regarded.

Closer to these shores, the GRNZ again conducted eight of 12 races at Addington on Monday over 295m by means of the English/Irish preferential draw.

There was not one significant collision in the eight races and only one dog was reported injured (a cut doe which received a five-day stand down).