SUPERSTAR Tiggerlong Tonk's retirement to stud has been put on a short delay until after the upcoming Speed Star series at The Meadows. 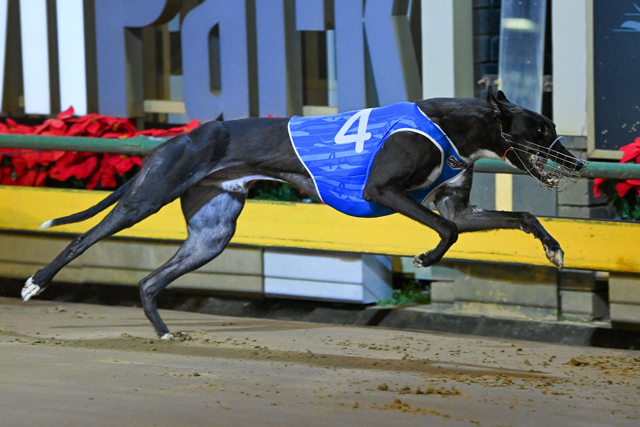 SUPERSTAR Tiggerlong Tonk’s retirement to stud has been put on a short delay after his sensational Meadows win on Thursday night.

The son of Dyna Double One-Tiggerlong Dot thrashed a super field at The Meadows last night sitting three wide in the early stages before going on to beat Do It and Derry Express in 29.83 with recent Group 1 winner Equalizer in fourth.

It had been planned to run the star in Wednesday week’s Speed Star series.

Grenfell said he had been told on Thursday night after the dog’s FFA victory his group 1 charge had jumped to fifth on the qualifying list, but today the news came through he is only ninth.

“There is no way I’m going to trial him to get him eligible for the Speed Star,” said Grenfell.

He and breeder/owner Michael Finn are waiting on DNA clearance for their great galloper which is expected soon.

“I spoke to Michael today and after last night’s great run, we have decided to press on for a short time,” said Grenfell.

“His run home time last night was his best ever at The Meadows.”

Grenfell gave Tiggerlong Tonk five weeks off after he went to Albion Park for the Group 1 series at the start of July.

“I gave him the fitness run at Bendigo and thought after that he may as well be back in against the best in town,” he said.

“I thought when he was three wide early he might be in trouble but he kept pushing and it all worked out for the best.

“The talk about him going to stud is happening because I was twice approached last night for semen from him.”

Grenfell said it is yet to be decided what fee will be put on the multiple Group 1 winner.

“I can tell you, I was kicking him home last night,” said Grenfell. “He’s such a great dog with such a wonderful temperament.”

Grenfell will target the Speed Star distance with Knicks Bale (Kinda Cruel Red-Dyna Willow) who won her third race from four starts over the distance at The Meadows last night.

“She’s the fastest qualifier now so she will go for it as well,” he said. “She has been a revelation since going to 700 metres.”