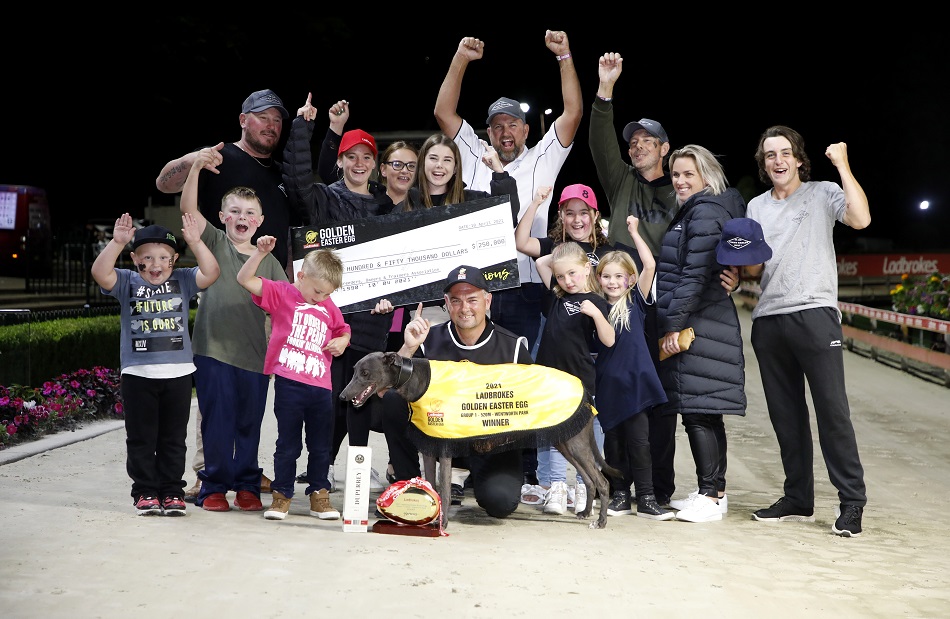 Betting suggested the $250,000-to-the-winner decider was going to be a two-dog war between Tommy Shelby and Wow and that’s exactly what the huge crowd that packed into Wentworth Park witnessed.

In what will go down as a Golden Easter Egg for the ages, Tommy Shelby crossed to lead from box eight with a rampaging Wow in hot pursuit.

From there the superstar duo battled fiercely before WA star Tommy Shelby pulled out too many stops late to prevail for trainer Steve Withers by 1 ½ lengths in a race record 29.27.

Well – they don't call him @Thepeoplesdog for nothing!

The roar of the crowd @WPGrey could surely be heard all the way in WA as their star Tommy Shelby took out the 2021 @ladbrokescomau #GoldenEasterEgg – in race record time.

“It’s been a crazy old month but here we are with the Golden Easter Egg – I couldn’t be prouder,” said Withers.

“But it’s all Tommy (Shelby). He’s just a special dog that has given us so much and tonight was no different. He just loves to race, he’s a fierce competitor.

“It’s hard to see exactly what is happening from behind the boxes but when I heard the big crowd erupt like they did I thought we might have got it.

“This win will take a while to settle in. Being on the road during coronavirus has been hard so to have the kids and family here for the first time tonight means the world.”

His record now stands at 29 wins from 44 starts with prizemoney in excess of $1 million, the son of Fernando Bale following in his sire’s footsteps which won the race in 2015, also from box eight.

It was just a few weeks ago that Tommy Shelby’s place in the Golden Easter Egg was in question after the unprecedented floods seen throughout NSW pushed the series back a week.

It meant the Sydney Easter showpiece was on a collision course with the Group 1 Perth Cup, the race Withers, a proud Western Australian, was desperate to win with his champion sprinter.

And while the battle between Tommy Shelby and Wow will go in greyhound racing folklore, the performance of third placegetter Baroque Knight was outstanding also.

Meanwhile, the second group 1 of the night went the way of the Mark Gatt-trained Stanley Road which recorded a last stride victory in the Association Cup (720m).

Heavily supported in betting for the staying feature, Stanley Road dropped from the clouds to record the most unlikely of wins after giving his rivals what appeared to be an insurmountable start.

Landing his second Group 1 title, Stanley Road scored by a head on the line from a gallant Fernando Cazz which led for all but one fraction of the 720m journey.

The victory handed Forbes trainer Jack Smith a second New Sensation title after annexing the race in 2019 with his champion sprinter Feral Franky.

The Group 3 The Ambrosoli (520m) – the race which recognises legendary broadcaster Paul Ambrosoli – was taken out by Victorian greyhound Lakeview Walter in a smart 29.61.