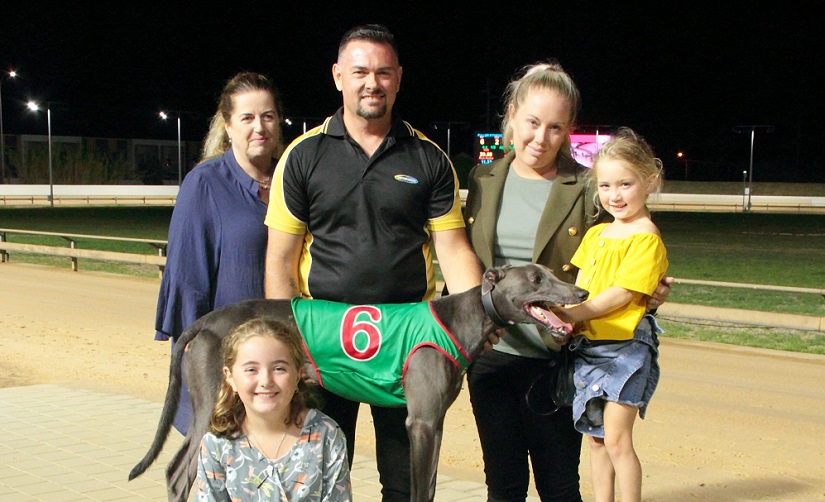 Tommy Shelby, a son of Fernando Bale and Serena Fly High, bred, owned and trained by Steve Withers, continued the near-faultless start to his career in last weekend’s Classic heats.

The $2 favourite led all-the-way from box six in a new Cannington personal best of 29.58s, improving his unblemished record at the track to seven from seven.

It was the March ’18 whelping’s eighth win from nine starts, with his only blemish to date being a narrow second at Mandurah.

Tommy Shelby was the fastest of the three heat winners, with the other two runoffs taken out by David Hobby’s Chimera Monelli in 29.68s and Jamie Marsh’s Star Book in 29.73s.

But while Hobby only won one heat, he qualified an amazing six ‘Monelli’ finalists.

Despite Hobby’s strength in Monelli numbers, TAB has marked Tommy Shelby as $1.80 favourite for the $19,950 to-the-winner Classic, despite drawing box five.

Chasing back-to-back Listed events after winning the Sandi’s Me Mum Memorial earlier this month, Withers doesn’t agree with the market, citing the depth of the field as a huge concern.

“It will be very, very tough,” said Withers.

“You’ve just got to look at the quality of young dogs over here.

“We’ve always had one or two good young dogs but the depth at the moment is unbelievable. There’s no place to hide.

“Tommy Shelby is going well and I don’t think the times in some of his wins have told the full story but if he makes half a mistake from box five he’s going to miss a place. It’s too deep a field.

“I’ll hold my breath for three seconds and if he hasn’t had any contact his mustering pace will get him to the front and he’ll have a chance.

“He doesn’t explode out of the boxes but once he hits the ground he really takes off.

“It’s about getting the opportunity. He’ll need some luck in the first five metres and if he gets that, from half-way to the winning post to the 600m boxes he’s really slick.”

Rails runner Redcap Monelli is the second favourite at $7, ahead of Chimera Monelli (box 4) at $7.50, while Steve Monelli (box 6), a litter brother to Tommy Shelby, is an $11 chance.

“We trained the mother (Serena Fly High), she went backwards and forwards between Sydney and Perth, and then we leased her for her first litter,” Withers explained.

“It’s a good litter but Tommy Shelby is definitely the pick.

“Tommy Shelby isn’t two yet but we’ll have a go at the Perth Cup if he stays sound. It’s on our doorstep and it’s only three weeks away but one day is a long time in greyhound racing.”