ROSIE Posie, a litter sister to superstar Koblenz, continued her great form since relocating to Tassie with victory in the Laurels Final at Hobart on Thursday. 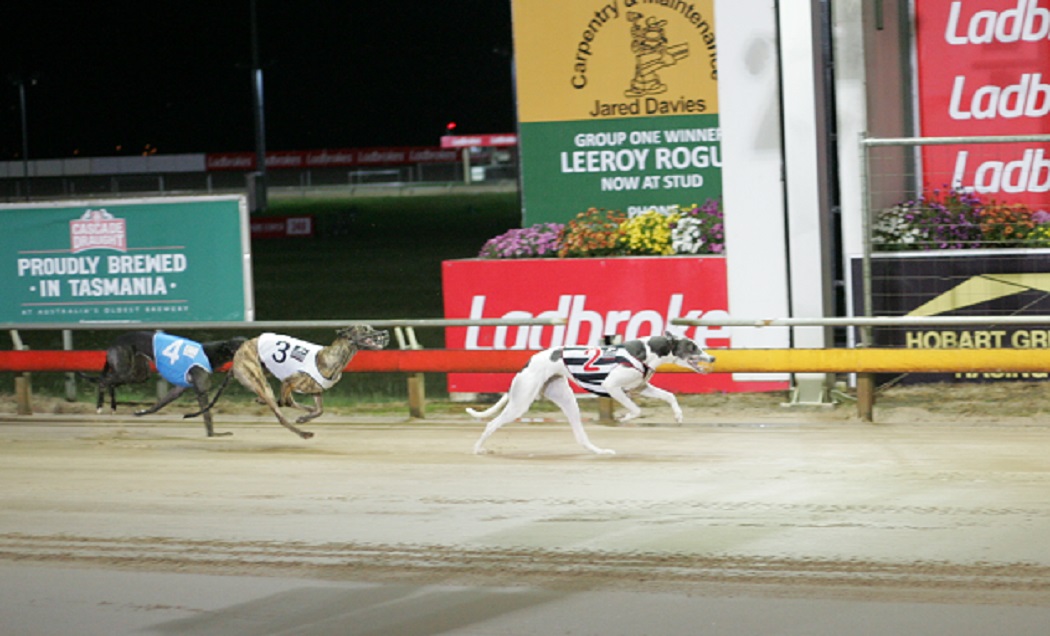 SUPERBLY -bred bitch Rosie Posie, a litter sister to Victorian superstar Koblenz, continued her impressive form since relocating to Tasmania with a dominant victory in the Leeroy Rogue Laurels Final (461m) at Hobart on Thursday night.

While her illustrious sibling Koblenz was beaten at $1.50 in a Melbourne Cup prelude at Sandown Park earlier on Thursday afternoon, Rosie Posie stepped out of her brother’s considerable shadow, much to the delight of owner/breeders Dave and Rose Geall.

Trained by husband-and-wife team Nathan and Susan Gittus at Mangalore, Rosie Posie, a daughter of Fernando Bale and two-time Group 1 winner Up Hill Jill, was sent to the Apple Isle after winning just three of her first 27 starts.

Rosie Posie made an immediate impression in her new home state, doubling her career win tally by scoring at her first three starts, highlighted by a flying 25.77sec Hobart success.

“We’ve had her here for a couple of months, she’s had eight starts, four wins, and has only missed a place once, when she was very unlucky,” said Susan Gittus.

“She showed ability right from the get-go after she arrived, which the Gealls knew she had.

“She has some pretty fancy littermates and I think they’ve got her earmarked as a future broodbitch, so they wanted to look after her and not get her knocked around too much.

“She’s not a brilliant beginner but she really picks up pace after 10m or so and that puts you right in the pack in Victoria.”

Rosie Posie ran third in her Laurels heat and after drawing Box 2 for Thursday’s $7280 to-the-winner final, she started at $4.80, with Blake Pursell’s Aston Ajok the $2.80 favourite from Box 5.

Miss Avatar ($4), trained by master conditioner Ted Medhurst, found the front from Rosie Posie, which settled second and joined the leader entering the home straight and finished too strongly, scoring by 1.5 lengths in a Best Of Night 25.88ec, her seventh win at start 35.

Rosie Posie is now likely to head towards upcoming features, notably the Group 3 Devonport Chase and Group 1 Hobart Thousand, where she may be joined by her litter brother and kennelmate Black Hawk Jet.

“Black Hawk Jet won first-up in Tasmania at Launceston and then went through the St Leger series. He was first reserve for the final but didn’t get a run,” said Gittus.

“It will be more so Rosie Posie going towards the Hobart Thousand. She’s run 25.77sec at Hobart, which is up with our best, but as you know, you need luck, and it depends on what comes down and doesn’t come down from the mainland.

“I’ve had a few dogs for the Gealls over the years. In my younger days I spent 12 months working in Victoria with Graeme Bate and I got to know Tina Womann (Rose Geall’s sister), which is where the connection comes from.

“It’s a family affair for us. Our eldest son Alex, who’s 14, is going through getting his handlers licence, and our other son Ben also helps out. The boys like helping and they like getting paid to help, which makes sure the work gets done!”

The St. Leger final was won by Ted Medhurst’s Rip Away, a son of Cutting Edge and Grease Explosion, in 26.01sec.